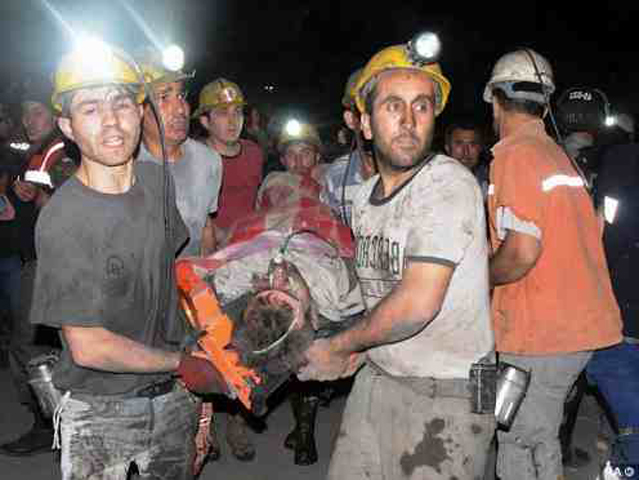 It is only a little over a year since the Rana Plaza garment factory collapse in Bangladesh killed over 1,000 workers. In May this year there was an explosion at a mine near Izmir in Turkey where  the death toll was 301 miners killed. It is believed a power distribution unit exploded in the mine which blew power supplies to lifts and conveyors, and started a fire. Most of the dead miners were killed by carbon monoxide poisoning. Nearly 800 miners had been in the pit at the time of the explosion due to a shift change.

It is Turkey’s worst mining accident, worse than the 1992 gas explosion that killed 263 workers near the Black Sea port of Zonguldak. Mining accidents are common in Turkey because of poor health and safety conditions. The Turkish Prime Minister Recep Tayyep Erdogan exhibited the contempt of the capitalist class for the working class when he said that ‘these accidents were part of coal mining’ and cited 19th-century incidents in Britain as examples.

A miners’ union leader Tayfun Görgün said that mining accidents would increase due to privatisations, the increasing employment of subcontractors and a lack of strong unions, all of which led to massive pressure on workers to produce as much as possible for as little cost as possible. A goldminer who has joined the rescue operation said that work safety and production pressure was a big problem in Turkey: ‘It’s all about how much you can get out in one day. Work safety just stays behind with such an attitude.’ Another worker confirmed this by saying ‘Production pressure has massively increased, it’s all about the output. If all they worry about is how fast the lines run and how much coal they can bring up and how much profit to make, the people who do this work become unimportant. And what happens to them becomes unimportant’ (Guardian 14 May). Murat Ali, a paramedic with the Izmir fire department wore a sticker on his uniform which read ‘Not an accident, but murder.’

The disaster has triggered protests across Turkey, and the Confederation of Turkish Trade Unions backed a one day general strike. A joint statement from Turkey’s four main labour unions said: ‘﻿Hundreds of our worker brothers in Soma have been left to die from the very start by being forced to work in brutal production processes in order to achieve maximum profits. We call on the working class, labourers and friends of labourers to stand up for our brothers in Soma.’

The authoritarian Turkish state responded in its usual way with water cannon, tear gas, and truncheons. Security forces deployed tear gas and water canon against around 20,000 protesters in İzmir. Kani Beko, general secretary of the Confederation of Revolutionary Trade Unions of Turkey, was injured in İzmir after police ‘intervened.’ In Istanbul the streets became heavy with tear gas, the police and water cannon trucks chased protesters, and protesters carried a banner which read ‘It’s not an accident, it’s murder.’ In Soma protesters chanted ‘Soma’s coal will burn the government’ and ‘Tayyep the murderer.’

Gulizar Donmez, the daughter and wife of Soma miners said ‘the wives of the miners kiss their husbands in the morning. When they come back, even if they are five minutes late, everyone starts calling. You never know what is going to happen’ (Guardian 15 May). Every day throughout the world members of the working class are being killed because of the global economic system that we live in. Capitalism is injurious to the health of the working class, it kills the working class of this world in its pursuit of profit through commodity production. The working class in Turkey and in the whole world need to transform human society into a socialist world where production would be for human needs and not for profit.