A Lack of Imagination 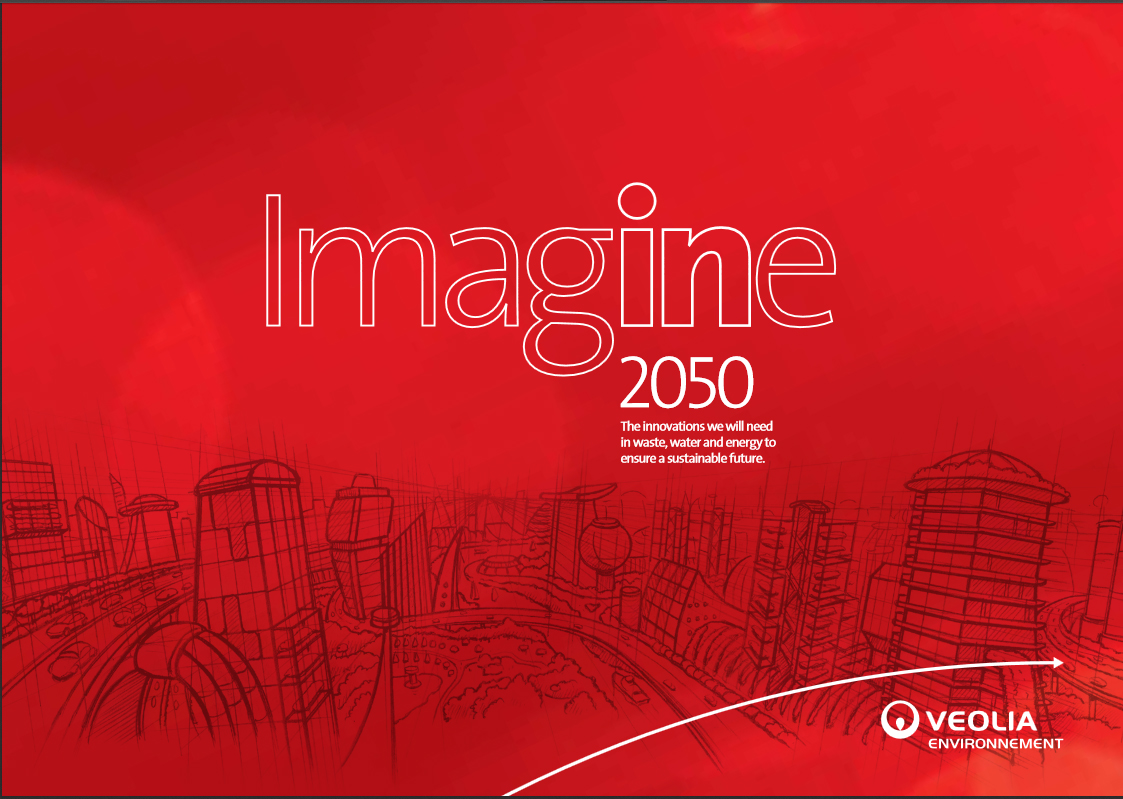 We look at what a capitalist corporation imagines 2050 could be like. But will it if capitalism continues?

‘Imagine 2050’ is the title of a joint report recently dreamt up by the environmental services multinational Veolia, and partnered by a group of economists ensconced in the British citadel of capitalist ideology – the London School of Economics. Veolia’s vision of the future describes ‘one future city in which system-level planning has created a dense, resource-efficient society characterised by collaborative consumption, shared ownership and local self-reliance’. Vague; but sounds kind of nice.

Telescoping the reader’s imagination the storyline continues: ‘The 2050 home includes a kitchen where waste is sorted by nanoscopic robots and food packaging that is designed to degrade in line with sell-by dates. Waste from the bin-less home will be collected via a pneumatic network, by an underground network, and transferred to treatment facilities. This 24/7 waste collection service will reduce the presence of vehicles in the city, helping to cut greenhouse gas emissions.’

And it doesn’t end there for these lucky urbanites as their homes will also feature, ‘ultrasonic baths, self-cleaning surfaces and water purification based on systems found in plants and bacteria’. And they’ll also enjoy, ‘3D printers and new paints and materials optimising natural light and improving energy conservation’ (edie.net).

Enter the LSE economists and their unwavering quest for a ‘better capitalism’. One that is civilised, caring; even cuddly. Slightly shrewder now since Her Majesty’s 2010 visit to the citadel when they were at a collective loss to explain her probing question on why the prevailing depression had occurred, and why were they unable to predict it? A tad wiser now? Perhaps they’d flicked through a history book of the last century or two which would reveal that slumps and depressions are endemic to capitalism. As are wars, mass starvation amidst plenty, and gross social deprivation. So ‘Imagine 2050’ adds a one sentence rider that, ‘models a scenario in which disparate and unregulated development has led to a resource-hungry urban sprawl where private consumption and ownership is prioritised over long-term communal thinking’. Sounds familiar? Yes, that’s right; it’s where city-dwellers the world over live right now.

It’s wise under capitalism to give some thought to who you enter into partnerships with. The LSE’s partner, Veolia, has an interesting past. Its origins lie in an 1853 royal decree by Napoleon III creating its capitalist foundations in a company called Compagnie Générale des Eaux [CGE]. Turning water into a commodity through the human labour necessary for a network of reservoirs, filtration and piping, CGE initially supplied water to Lyon, and then obtained a 50 year concession to supply water to Parisians. Profits gained through surplus value gushed so that in 1976, a new, ambitious CEO, Guy Dejouany, branched out into other market sectors. Through a succession of takeovers of companies as diverse as waste management through to the media came the creation of Vivendi Universal, Vivendi Environment, and finally the catch-all name, Veolia. And there was a sound reason for the change of name. It’s wise to distance yourself from a bad name, and Vivendi had become synonymous with bribery and fraud.

During 1996, five out of 13 directors on the board of Vivendi were under investigation for corruption. In 1997, Vivendi executives colluded with civil servants to channel illegal commissions of up to $86 million- primarily to Jacque Chirac’s party (the RPR) from public contracts worth $3.3 billion. Italian courts sentenced the Milan City Council president to three years in prison for accepting a $2 million bribe from a Vivendi subsidiary during bidding on a $100 million contract. In 2002 a Vivendi CEO was convicted of fraud by the U.S. Securities and Exchange Commission (corporatewatch.org). There were several other high profile allegations, but when you have allies at the centre of financial and political circles accusations generally evaporate.

In 2003 Veolia Environnement S.A was created and headquartered in Paris. It had grown into the biggest water service company in the world. Waste management, energy and transport are its other interests in a business that in 2012 encompassed 48 countries, employed 318,376 people who provided takings set at €29.4 billion. Veolia’s business model was succinctly revealed when its CEO said, ‘Many of the best performing contracts are those where a private operator assumes the operational and commercial risks, but not the major capital expenditures’ (fwwatch.org). Underlying this is the unspoken, always denied, premise that corporations expect governments to pick up the bill for those capital expenditures. Ideological support from economists and an array of apologists for capitalism underpin the ease with which corporations like Veolia gain profitable contracts in the name of privatisation, market efficiency, and the ubiquitously touted ‘ownership society’. Avoiding major capital investment, leasing assets and simply collecting revenues ensures profits flow like water from a tap.

Like all capitalist enterprises Veolia’s principal goal is to maximise profits to ensure shareholder returns. Veolia’s strategy to attain that goal has a history of imposing, ‘lower wages and reducing retirement, health care and other benefits; break contracts; enforce lower work standards detrimental to workers and the community; and reduce the workplace environment to levels below safety standards’ (workers.org). Not content with that in the name of the ‘ownership society’ Veolia uses, ‘other cost cutting measures (inadequate testing, treatment and maintenance), illegal dumping and processing of toxic material. Problems range from service outages, to illegal sewage discharges, to safety hazards, explosions, neglected equipment, and lower water quality’. There are multiple incidents reported globally concerning Veolia’s corporate strategies. Mismanagement of the water supplies has seen scores of law suits and non-renewal of contracts. Even in Veolia’s own backyard of Paris, after 25 years, the city decided, ‘not to renew its contract with Veolia in order to stabilize water rates and save money – which it has’ (corporatewatch.org).

How many will benefit?

‘Imagine 2050’ ends with a piece of advice from LSE senior research fellow for LSE Cities Dr Savvas Verdis: ‘A circular economy cannot be built piecemeal, a systems-wide approach is essential’. Obviously, given their partnership with Veolia the LSE economists imagine that this nebulous circular economy is possible under capitalism utilising corporations like their partner. To encourage businesses to become involved in this business idea Circular Economy 100 has been founded. Knowledge of who they’re dealing with resonates with their mission statement: ‘The Foundation has created the Circular Economy 100 programme to support business in unlocking this commercial opportunity and to enable them to benefit from subsequent first mover advantages (ellenmacarthurfoundation.org). Which translates as: There are profits to be made, but you have to get in quick before they dry up.

Marketing and PR reports seek to hide the truths beneath the carefully worded gloss. Which is precisely what  ‘Imagine 2050’ does. Globally, 1.1 billion people lack access to clean water, 2.6 billion people have no access to basic sanitation. In addition, 2 million children die annually due to easily preventable water borne diseases, andapproximately5000 children die from preventable diarrhoea-related diseases every day.Veolia recently wrote to the Human Rights Council’s independent expert of its efforts to help poor areas of the world and ‘boasted about how it has expanded water access, particularly to those living in remote areas’. However one month later, ‘it told credit analysts on Wall Street that it prioritized ‘financially sound clients’ in dense urban areas’ (corporatewatch.org). And if the urbanite can’t pay Veolia’s bill? ‘An employee at Veolia in France has been sacked for refusing to cut off the water supply to poor families.The man, named in the French media only as Mark, had been employed at Veolia for 20 years but was handed his dismissal letter on April 4th for his refusal to implement the cut-offs following the non-payment of bills’(thelocal.fr/19 April).

UN-Habitats research reveals that the world’s slum population has already grown by 75 million in just three years. And by 2050, expectation is that one in three people will live in urban slums. How many do you believe will benefit from the technology described in Imagine 2050?

PR has another purpose. To create a ‘feel good factor’. To beef up confidence in the future. It doesn’t just try to sell you the commodities, it sells you hope. Fortunately, you can only stack bullshit so high before everyone realises it stinks. Ideologists like the LSE’s economists like to tell us that there is no alternative. Capitalism is eternal and everlasting. They seem incapable of unlocking their own imaginations from the prison of capitalism’s markets. But the technology that they describe in Imagine 2050 is helping to shape people’s thinking and provide the nails for capitalism’s coffin. Those technologies and many others are already in development. A barrier exists for the vast majority to those technologies. And that barrier is capitalism. Jamming its grubby little fingers into the dam are apologists like the LSE’s economists. And the nicest thing that can be said about them is that they lack imagination.