Film Review: The Condition of the Working Class 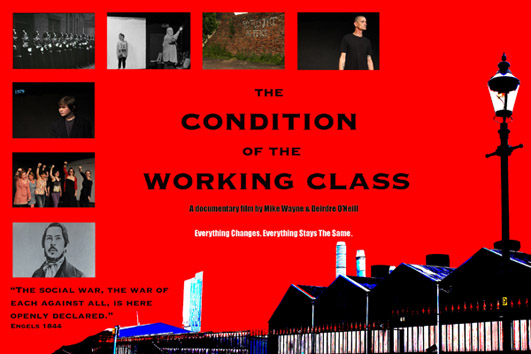 The SERTUC Film Club at TUC Congress House in London recently screened The Condition of the Working Class, a new documentary film by Michael Wayne and Deirdre O’Neill who had previously worked together on the 2009 documentary film Listen to Venezuela. Over a period of eight weeks, the film follows a group of actors and non-professionals in The Ragged Collective (a homage to Robert Tressell) in Salford and Manchester as they work to put on a theatrical project based on their own working class experiences, and the Friedrich Engels book The Condition of the Working Class in England in 1844.

The actors tell of working class life in Manchester in the age of austerity economics in capitalism where ‘working class people are hurt by the cuts, there are attacks on collectivity, the bourgeoisie use divide and rule tactics, and people who have nothing want change’. Engels wrote ‘the social war, the war of each against all, is here openly declared. People regard each other only as useful objects; each exploits the other, and the end of it all is that the stronger treads the weaker under foot; and that the powerful few, the capitalists, seize everything for themselves, while to the weak many, the poor, scarcely a bare existence remains’.

Like in Ken Loach’s film Spirit of 45, some of the people in this film feel that Thatcher is to blame for everything, as if capitalism was only invented in 1979 but the reality is that she presided over the operation of capitalism during the worst part of the slump phase of its economic cycle, and was the head of an openly pro-capitalist government.

There are many differences between life today in Manchester and life at the time of the Engels book but fundamentally there is no change as the capitalist mode of production grinds relentlessly on. The film participants state that a person has to ‘sell my labour or starve’ (the working class sell their labour power to the capitalist), that ‘society is divided into a bourgeois ruling class and a working class’, the BBC is referred to as ‘the Bourgeois Broadcasting Corporation‘, and ‘the bourgeoisie are riddled with class prejudice, oppress the working class, and use the power of wealth and the state so that the rich look after the rich’. A reference is made to the gentrification of parts of Manchester such as the Docks where it is pointed out ‘the working class built Salford Quays’ which recalls Brecht’s poem A Worker Reads History: ‘who built the seven gates of Thebes?/the books are filled with names of kings/was it the kings who hauled the craggy blocks of stone?’

The film demonstrates what Engels wrote, that ‘the humanity of the workers is constantly manifesting itself pleasantly. They have experienced hard times themselves, and can therefore feel for those in trouble, whence they are more approachable, friendlier, and less greedy for money, though they need it far more than the property-holding class’.

Film International commented ‘this is not a film, it’s a rehearsal for revolution’ which is true in a sense, but unfortunately no one mentions the word ‘socialism’.