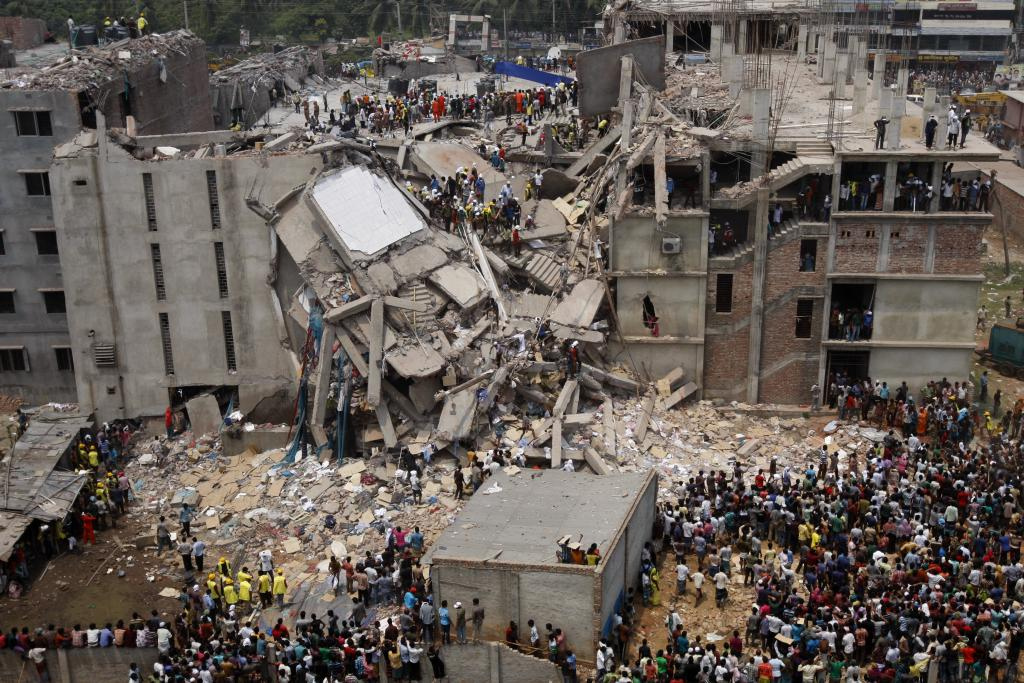 The collapse of the Rana Plaza garment factory building in Savar, near Dhaka, capital of Bangladesh, on 24 April this year was another example that the global economic system that we live under, known as capitalism is injurious to the health of the working class. Actually, capitalism kills people; it kills the working class of this world in its pursuit of profit through commodity production. The week before, on the other side of the world, a fertilizer plant had exploded in Texas on 17 April killing 14 workers.

The day before the collapse a crack had been detected in the building’s structure and the workers had been sent home, halting production. The next day the workers returned in the morning to be informed the building had been inspected and declared safe and the workers were ordered by managers to return to work. The initial death toll under the 600 tonnes of rubble was 76 workers but after three weeks of recovering bodies the death count had climbed to over 1,000workers, mainly young women. Around 2,500 workers were injured in the building collapse and 34 bodies were too damaged or decomposed to be identified.

The Bangladeshi garment industry is worth $20 billion (£13 billion), employs close to 4 million workers and accounts for 80 per cent of Bangladesh’s exports. Sixty per cent of the garment exports go to Europe and 23 per cent to the USA. Bangladesh has the second largest garment industry in the world after China. Following the building collapse there were protests on Workers’ Memorial Day and May Day. The President of the Bangladeshi Garment Manufacturers and Exporters Association expressed the concerns of the capitalist class when he worried about ‘the disruption in production owing to unrest,’ but the Bangladeshi Finance Minister said about the garment building collapse: ‘the present difficulties… well, I don’t think it is really serious – it’s an accident.’

The Rana Plaza building collapse follows recent incidents in which workers have been killed in the Bangladeshi garment industry. In April 2005 the Spectrum sweater factory building collapsed killing 64 workers; in December 2010, 27 workers were killed in a fire in a factory that made clothes for Gap; and in November last year a fire at the Tazreen Fashion Factory which produced garments for Walmart and IKEA killed 117 workers. The Rana Plaza disaster even outstrips the devastation of the Karachi garment factory fire in September last year which left 289 Pakistani garment workers dead. Since the disaster there has been another fire, at the Tung Hai Sweater factory in Dhaka on 8 May, killing 8 people.

Doug Miller at Northumbria University said ‘Factory owners can’t make money on the original order – the price has been set too low – so will therefore find someone who can – subcontracting to producers of ever-declining standards. In Bangladesh you have a glut of buyers in search of a cheap product wanting to place enormous orders; and capacity is built hurriedly. Factory installations are shoddy; workers locked in and lead times are too tight.’

Brad Adams at Human Rights Watch said: ‘Given the long record of worker deaths in factories, this tragedy was sadly predictable. The government, local factory owners, and the international garment industry pay workers among the world’s lowest wages, but didn’t have the decency to ensure safe conditions for the people who put clothes on the backs of people all over the world.’

Trade unions are almost non-existent in Bangladeshi garment factories. Aminul Islam, a trade unionist who worked for local labour groups affiliated with the AFL (American Federation of Labour), had his phone tapped, was subject to police harassment and was once abducted by state security agents and beaten. In April 2012 he was trying to solve a labour dispute at factories that produced shirts for Tommy Hilfiger when he disappeared and has not been seen since.

The history of capitalism is littered with the deaths of the working class: 146 garment workers were killed in the New York City Triangle Shirtwaist factory fire in 1911; the Senghenydd Colliery disaster in South Wales in 1913 killed 439 miners; but nothing we hope can surpass the devastation at the Bhopal Union Carbide Plant in India in 1984 when between 4,000 and 20,000 people died. Warren Anderson, CEO of Union Carbide, never faced prosecution because the US government refused to extradite him to India, citing lack of evidence.