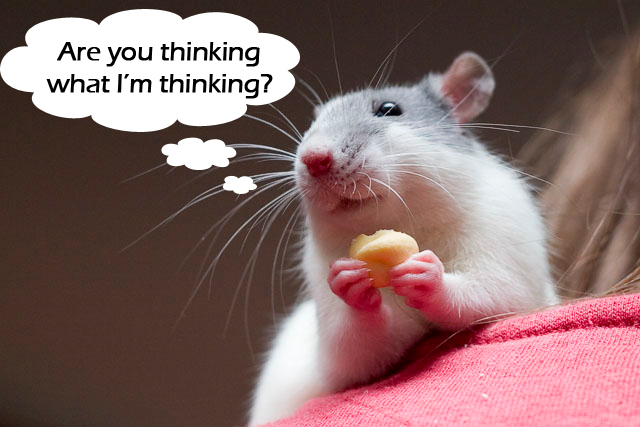 In Alfred K Bester’s celebrated 1951 sci-fi novel The Demolished Man the antihero plans a murder and, knowing he will be a suspect and fearing interrogation by the telepathic police, commissions a jingle writer to create a musical ‘earworm’ so compulsive that the police interrogators will not be able to ‘see’ past it into his deeper thoughts. Now, it seems, the first tentative step towards such telepathic intrusion has been taken.

The final frontier is not space, it is the wall between neurology and psychology, the physical brain from the outside and the subjective mind from the inside. MRI scans have shown that different parts of the brain ‘light up’ when we have different thoughts and feelings, giving researchers clues that there is indeed a correlation between brain geography and function and thus allowing the recent revolution in brain mapping to take place. A new study in North Carolina has gone further, using implants in rats, by reading the signals from one rat brain and communicating them to a second brain, allowing the recipient in effect to ‘read’ the sender’s thoughts. The recipient can then complete a task as directed by the sender’s brain, whether the sender is in the next cage or a continent away (‘Telepathic animals solve task as one’, New Scientist, 9 March).

The study reports a success rate of around 60 to 70 percent, placing it well above random chance but considerably short on reliability, and the reason is that the ‘reading’ is only an aggregate of the local brain region’s signals, aimed at the same region in the recipient’s brain. Given the crudeness of the procedure it is surprising that it works at all, so the success rate is actually remarkable. If it ever becomes possible to map the signal of each individual neuron and aim it at an equivalent target neuron, accuracy could theoretically jump to near 100 percent. An analogy that may occur to some readers is the first wide-frequency Marconi blast across the Atlantic that heralded the beginnings of radio.

Were we now living in a peaceful, creative society of socialist common ownership, such news would doubtless excite interest and debate among the informed and engaged population. As it is, forced to endure the heartless world of money slavery and ruthless competition at every level among a misinformed, alienated and paranoid population, debate can only take a darker form.

Already there is talk of military applications, including using mind-controlled animals and even insects as surveillance and ‘assassination drones’. Advertisers of the future will be wetting themselves at the potential for subliminal persuasion and stratospheric profits. Civil Rights groups will be passing sleepless nights bathed in beads of sweat at the idea of Orwell’s Thought Police coming to life.

Surely not in a liberal democracy? people will cry. But who says the future of capitalism involves democracy? Liberal democracies are only liberal because police states are too inefficient and expensive and popular consent is by far an easier thing to manage. With surveillance that can peer right into our private thoughts, what capitalist state would need to bother asking our consent? Imagine a future ruled by China or North Korea, but without their present hearts and flowers liberalism. Or worse, a global theocratic regime along the lines of Iran or Saudi Arabia, or if the Christian fundamentalists get their way, the Second Coming of the Catholic Church, with free inquiry replaced by a fearful Inquisition. Surely, once the final frontier is breached, our minds will not be our own, our ego will be demolished and our slavery will be complete.

Lots of workers are so depressed that they do think like this. If you ran an MRI scan of their brains it would show a black cloud around the words ‘I give up’. Or it would be a sign saying ‘Not at home – on holiday in la-la land’, because the result of a depressing outlook is a retreat into denial. Wouldn’t it be better to contemplate a future that’s just as plausible as any of the above, but one which is infinitely more positive? Instead of conspiring in our own oppression we should be aspiring to our collective liberation, by discussing how the amazing developments of science could be used for good in a society based on the common good. Optimists embrace the future while pessimists run away from it, and socialists are optimists by definition. The technology of telepathy doesn’t have to be threateningly invasive, or about mind control. It could be the path to a truly neural internet, the power of the brain unleashed in a cognitive and communicative revolution that would make our present state of knowledge look like Stone Age flint scrapings. If you can’t feel inspired by that you’re just not trying hard enough. Now, on the doorstep of such breakthroughs, is the time for us to talk about taking the world away from its reckless clique of billionaire rapists and putting it under new collective management, where such breakthroughs can truly prosper and give benefit. Because if we don’t make our dreams come true, our nightmares surely will.