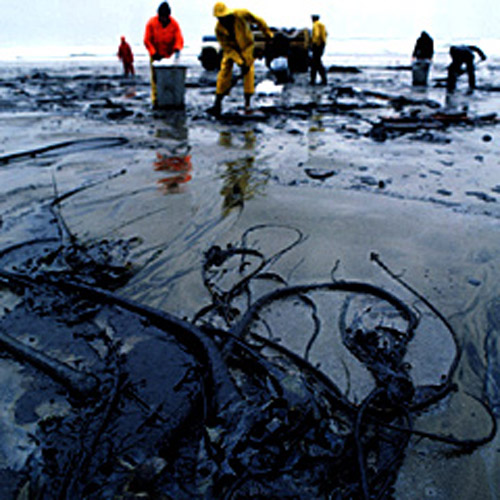 The third, concluding part of our series on the possibilities of socialism.

Socialist society will inherit a number of problems from capitalism. So we must take some account of the prospect and estimates of likely changes in the near future as a result of climate change and a post-peak oil world society.

On peak oil there seems to be pretty well a consensus now, worldwide, that we have a mounting problem on our hands and a marathon task ahead to sort out the problem. However, the biggest stumbling block is the manner in which the subject is presented to us –again, always in terms of money costs. We already have the technical know-how, and when scientists and technicians and engineers are finally freed from the constraints of the current system of having to make a profit at every step, there really is no doubt that they can come up with even more fantastic inventions than we can currently dream about. The solutions we are being offered are lack-lustre and extremely limited, only taking into account those who can pay. Are we drilling for oil and gas and mining for coal because of the positive benefits they confer? Are we building more and wider roads and increasing air travel for increased ease and convenience for travellers? Are we chopping down forests to plant palm plantations and using other crops for biofuels instead of for food because feeding people is more important than feeding engines? No!

The reason for trying to extract oil from way under the seabed –with all those risks involved to the environment –and from the filthy polluting tar sands is simply that it is profitable. Coal is even more harmful to human health but still profitable. Burning fossil fuels could go on for some little time yet with the various beneficiaries wheeling and dealing about the most profitable ways to prolong the despoliation of the planet and the negative effects to human health. We know we have much better methods already in our hands and hosts of people chomping at the bit to get started in putting these new technologies into practice on a very large scale at the household and industrial level. Many would have chosen to have done it years ago if it weren’t for the prohibitive monetary cost. Clean electricity from sun, wind, wave and tides. Geothermal energy. Oil left in the ground or reserved for crucial manufacturing and extracted with care. Buildings constructed to use minimal energy and have minimal impact on the environment.

Similarly with transport. What we need is a system that doesn’t require households to have one or more cars because the public transport system is so abysmal and work arrangements chaotically organised –read ‘organised to maximise profit’. Roads and airways are not the most efficient way of moving either people or goods. Presently they are huge polluters and the bane of many people’s lives. We could take a holistic approach and could use clean electricity from renewable sources to provide an integrated transport system for people, products and industry. Recycling will be undertaken as a matter of course in every possible area. Materials, being our storehouse for the future, will be valued for their worth to our ongoing wellbeing; they will not be wasted by an obsolescence-mentality but used wisely, aesthetically and carefully in line with our philosophy.

Externalities, the negative aspects of transactions which have to be kept off the balance sheets in case they impact on profit margins –effluent in waterways, emissions dangerous to animal and plant life, the dumping of toxic waste on land and in the sea, any despoliation of our habitat and disregard for the conditions in which people live and work in relation to these externalities –will become an integral part of the planning equation, to be taken account of in full on the balance sheet of the common good.

Farming methods will be adopted according to health benefits, not wealth benefits, and satisfying genuine hunger, not hunger for profits. For instance, how will the current water inequalities be resolved around the world? Water is vital to life, it’s vital to agriculture and manufacturing and it’s needed in both urban and rural environments. Right now agriculture is losing the price war for water.

On an international scale we now find countries making deals with other countries to grow the whole or the bulk of their grain crop because the water they save by not growing it domestically is more profitable used elsewhere. For others their own water shortage problems are relieved –never mind if the local populations of the grower nation have to go short or be put off their land and out of their homes for this exchange.

There is huge wastage of water with some countries’ current irrigation methods, poor infrastructure, and old or outdated technology in some industries. There is also a billion dollar business selling bottled water at up to a thousand times the cost of water from the tap with how many thousands of gallons wasted in the process? Crazy! With shrinking aquifers and glaciers, and fertile land sinking below rising sea levels, water is seen only as a vital resource with an ever-increasing price tag. With the profit motive removed from the equation things will be managed very differently.

In the likely future, demographics will probably shift a great deal, but we shall be in a position to totally rethink the use of the global water supply and consider every stage from aquifers, dams, irrigation methods, industrial use and domestic consumption. Water and the infrastructure required will be considered in minute detail as to how best to use, reuse, conserve and generally value it as a basic necessity of all life –one of everyone’s fundamental requirements.

Also within agriculture we shall be reassessing the relative values of different methods of producing our food. We shall be free to look at the results of studies knowing that there is no hidden agenda or biased information. It is well known that the United Nations Millennium goal of reducing extreme poverty by half by 2015 is failing miserably. Hunger, illiteracy and disease are still growing year on year. What actually is acceptable poverty or tolerable poverty anyway?Poverty at any level is pretty grim, surely?

When we have the correct, unambiguous facts in front of us decisions can be made unemotionally about land use. Chemical fertiliser or natural manure and traditional methods? Monocrops or mixed farms? Grain for food or fuel? Grain for humans or animals?

What’s so important about grain? This depends on how you see the future. It depends on whether you consider it more important to use it for human food, for animal food or for transport fuel. It impacts on how you view population forecasts or global warming warnings and it depends to a certain extent on where you live in the world.

Surely it makes more sense in general to reduce food miles –to re-localise agriculture for everyone’s benefit? By doing so huge savings will be made in fuel and energy use. Certainly in the period of social reorganisation whilst we are investing our human energies into appropriate infrastructure we can cut emissions drastically and restore food security and control to local communities, always remembering decisions will be made locally. On the global scale we will move right away from decisions imposed and implemented by world financial authorities and transnational corporations in favour of working for the common good. Respect will automatically be conferred to local knowledge and traditional methods, understanding that the objective will be to satisfy food, fibre, fuel and other needs, not monetary goals.

As to demographics, one proven positive knock-on effect of education for girls, especially, as recorded in places such as Pakistan, Afghanistan and some African countries is that in communities where the girls have the opportunity and encouragement to go to school they then grow up to marry later, have fewer children and the numbers of both maternal and infant deaths decline.

Statistics also show that more stable family conditions, e.g. security of food and income raises people to a different level of security where it isn’t seen as linked to a large brood of children. The security of free access in a socialist society will fulfill that role. In these terms it is possible to see that population levels will decline because of mass conscious choice, relieving some of the pressures foreseen as a result of climate change.

Socialism will involve life without healthcare budgets; waiting lists will be made history; there will be no treatment denial; there will be access to healthcare from prenatal to death, with preventive medicine recognised as the core of a healthy society; known cures such as for malaria will be available universally; unencumbered research into cures for diseases like multiple sclerosis will take place; unhampered individual choice and access to contraception, abortion, rehabilitation therapy, respite care and, where appropriate assisted suicide, will be the norm.

Basic schooling would take a huge shift away from the narrow confines of a rigid, test-based curriculum. Endless possibilities would be available from an early age to stimulate children. No financial budget means more ‘educators, facilitators, trainers, coaches, mentors’ etc. to guide young and old through a much wider educational experience. Learning is better stimulated through a holistic and experiential approach and would be available on demand at all life stages.

Imagining a socialist society entails the following: we imagine many pluralist, co-operative, non-competitive, non-combative communities around the world, linked by their common goals of creating space for free thought, wider vision, acceptance of the other and tolerance of minority issues. We imagine a balance between ‘back to nature’ and ‘into the future boldly’, philosophically embracing both healthy body and healthy, enquiring mind. The process of developing this, the only viable alternative society to the market economy, will come from the local and familiar at community level from all the many diverse regions of the world, as all are recognised and welcomed into the free association as valuable parts of the whole. We imagine societies of individuals having vanquished the oppressive capitalist system at last and having satisfied basic needs, now conscious of their higher human faculties and aware of their role in the environment, focused on being all they can be.