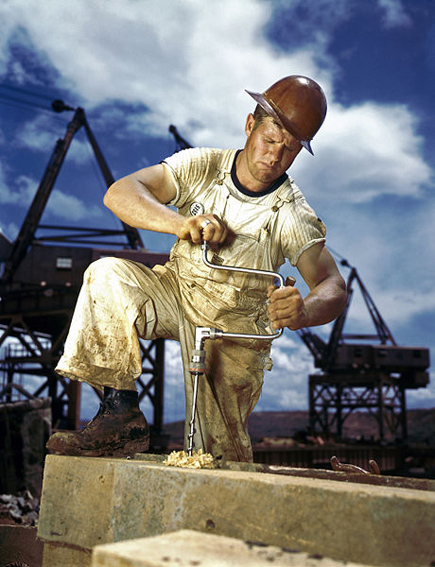 We continue the series, this time looking at work.

All around the world, in the environment of capitalism, most people consider themselves ‘lucky’ to be ‘in work’; ‘lucky’ to have the means to support themselves and their families; ‘lucky’ not to be one of those discarded as surplus to requirements. More thought is given to the remuneration for work done and the security of job tenure than to any concept of stimulation, satisfaction, fulfilment or contribution to the community – let alone to the collective aims of society.

In considering the difference likely within a socialist environment of voluntary work and free access we can begin to overturn these long-held values and explore the vastly wider possibilities of work being done for its intrinsic value and for its worth to society, unburdening all from the yoke of wage slavery and enabling each and everyone to extend their horizons in setting out to achieve their full, self-determined human potential.

There is much work done today both formally and informally which will need to continue. That which is socially useful now, whether recognised as legal or informal or black market, will continue to be useful. There will be no antagonisms or fissures in society caused by protectionism or disagreements about who’s taking whose work. The change will be that of ownership – everything will be owned in common and the best people to organise the running and functioning of workplaces will be those who understand and have experience of their particular discipline. In other words, the people who do the work now, but who will have become free from former constraints and are now able to determine different goals and outcomes.

Decision-making will be focused on benefits to society in general. Economy will relate to use of materials and reduction of waste. Doing and thinking, hands and head, will both be vital components in our socialist system – and as socialist consciousness will have grown to the point of enabling the change, so too the understanding and acceptance that all contributors to our new society are valuable. What are currently perceived as inequalities by some but as earned rights by others (reflected today in differences in pay scale, bonuses, holiday entitlement, pension) will be viewed quite differently. As we would wish to have our contributions recognised as worthy so too will we value the wide-ranging contributions of others.

All work that is paid now that is considered useful and beneficial to society will continue. Those now unemployed or underemployed will be welcomed into the world of free association as extra hands and heads. Likewise, work that is now undertaken voluntarily will continue to be useful and advantageous. The voluntary sector will bring forward many who already have well-developed social consciousness – previously having recognised the inequalities in society and the lack of access or opportunity afforded to others. Voluntary work after all is just another mode of occupation which currently fills many gaps deliberately left unfilled because they are a burden on the economy; where people are left needy according to the whims of the market and are rescued to some degree from their difficulty by people working for the common good.

What will become redundant because unnecessary in our society of free association will be the damaging, parasitical elements of current employment ‘opportunities’. In a world of voluntary work and free access a sizeable portion of worldwide population will be freed up from spurious ‘pseudo work’, work that contributes nothing necessary, positive, useful or aesthetic to society. Work which simply moves money around or protects money and the moving of money around or incarcerates those who choose to defy the rules of the system by helping themselves to what, in the capitalist system, is perceived to be against societal norms. Instead they will have the opportunity to contribute positively to the aspirations of society as a whole. However, we can’t simply denigrate those who work in these areas for doing so now. They, too, need employment in today’s system and are merely doing what they have been groomed to do to fit into a niche deemed desirable and necessary. But what a huge number of individuals will be released from what will be looked back on as an era of useless, worthless bondage to money. Released to be themselves; to become useful, valued members of their communities to which they can now add real value.

Waste of labour power, waste of resources, waste of time, waste of potential, there is so much unnecessary waste! One of our aims will surely be to eliminate waste of all kinds. Current waste levels, acceptable, even necessary to an extent in capitalism can be turned on their head in a socialist society which would redirect labour to useful, productive and creative occupations. All use and reuse of materials will be carefully assessed as to their most advantageous and least harmful outcomes. Work in general will be carried out in comfortable, healthy environments using the most appropriate technology where it’s a positive requirement and always with the opportunity and options for creative work left open. Not accepting the requirement of growth per se, the aim will be conservation and the achievement of a steady state with the philosophy of ‘do no harm’ – to animal, vegetable or mineral.

Quality goods will replace the obsolescence culture and whole new looks at transport, energy and infrastructure will bring about a truly sustainable approach. Fulfilment of individual goals other than consumption; development of the wider human faculties and societies working together for common social and environmental benefits will be the modus operandi. This is part of Marx’s ‘association in which the free development of each is the condition for the free development of all’. Also, as Marx pointed out, in socialism production is a question solely of planning and organisation in which producers do not exchange their products. All of us will be in effect involved in voluntary social work following a plan or plans endorsed by (most) of us. We will acknowledge the free association of producers, facilitators, transporters, administrators, caterers, carers, trainers, artists, educators, cleaners, entertainers, engineers etc, etc, all as necessary, indispensable cogs in a wheel – we each will play our part in keeping it turning and oiled for the benefit of all.

Does a plumber or an installer of alarms really have to travel several hours to do useful work? Isn’t it possible that someone on the doorstep can perform such a function? Actually, will we need any alarm systems installed anyway? (Well, maybe fire alarms or other life-saving or life-enhancing systems.) It’s the crazy job market that dictates where and how far people will travel. Imagine how much more efficient the whole caboodle will be in socialism – massive human energy savings, by vastly reducing travel miles (and fuel and emissions savings while we work on reducing these speedily to as close to nil as possible).

How much more pleasant and rewarding the whole work experience will become with easy access to the workplace meaning a less stressful day for a start – and a finish. With a fully integrated public transport system in place, cities could be restored, converted, transformed, even to be places in which it would be pleasant to live, clean and with expanses of green areas, woods, communal gardens, even agricultural areas. Gone will be the inglorious mix of slums and gated communities. Cities will become places worthy of living in when we’ve stopped seeking efficiency in money terms for every single thing and given back people the ownership of their communities and substituted the attitude of the best outcomes for people and planet in every situation.

The policies over the last few decades which have resulted in the demographics of rural and urban communities being totally changed, making it impossible for many to make a living in the rural areas and coercing them into cities and continuing poverty can be overturned with the will of the people. And when much of urban work will have become redundant, society as a whole will be free to choose the kinds of environments they wish to live in. In many parts of the world there will surely be a huge, voluntary shift back to the land, creating thriving, coherent communities with localised services.

Short-termism and consumerism as we have come to know them will be replaced by an understanding of the consequences of ignoring externalities. Capitalist corporations now largely ignore externalities; they don’t factor the negatives into their equations. Cleaning up their mess whether in air, ground or water robs them of their profits; these costs in human health and environmental problems are not their concern. Individuals, being captives of the current system, are almost powerless to be in any way effective against the mighty machine. Whether adding hourly to the ever-growing mountains of plastic waste or depriving other communities of their potable water for us to be persuaded that bottled water is best, or propping up child labour through purchases of shoes and clothing, or simply putting petrol in the car – the system pretty well dictates what our choices must be. Whether as worker, consumer, tourist or activist we are obliged to choose only from what’s on offer – and a choice that doesn’t embody our principles is no choice at all.

Concludes next month with a discussion of other aspects of a socialist society such as food, healthcare and education.