“Be realistic, demand the impossible” (Situationist graffiti, Paris, May 1968)

Marseilles in June: the French legislative elections and Euro 2012 on TV; a street market; the smell of tree blossom; voices in French and Arabic; the aroma of Provençal cookery or Maghrebi cuisine; and the anise flavour of pastis.

It is 25 years since my last visit to France when, as a student, the important things in life were “French”: the ‘Cinema du look’ of ‘Diva’, ‘Betty Blue’ and ‘Subway,’ which focused on alienated, marginalised young people in Mitterrand’s France; the Existentialist philosophy of Sartre in La Nausée and of Camus in L’Etranger; Tom Vague articles on Situationism, and the May 1968 ‘événements’; and being fascinated by ‘action directe’ political violence.

Marseilles’ population is one-quarter French, one-third Italian, and one-quarter Maghrebi (Algerian, Tunisian, Moroccan) and there are also Africans from the former French colonies such as Mali. During a visit to an Algerian café for a mint tea, I watch the Euro 2012 match France v England on TV and France equalise; the scorer is Samir Nasri, a Marseilles born player of Algerian ancestry.

Algeria gained independence from France in 1962 after a guerrilla war waged by the National Liberation Front (FLN) (dramatised by Gillo Pontecorvo in his 1966 film La bataille d‘Alger). An unstable bourgeois democracy exists in Algeria after a long civil war in the 1990s and a state of emergency that lasted twenty years. A poster on a wall in Marseilles calls on “Les citoyens algériens, résidents en France” to boycott the Algerian legislative elections in May 2012. 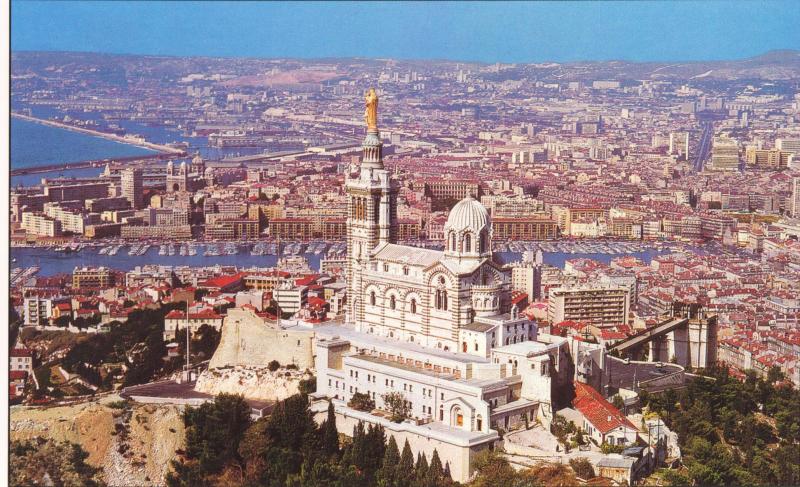 Marcel Pagnols’s plays of the1930s were set in the docks and bars of Marseilles. The docks are now gentrified and known as ‘Vieux Port’, and the adjacent district known as ‘Le Panier’ has been prettified, which is a long way from its notorious reputation in the 1970s as a major heroin den. The local transport infrastructure is impressive, with its municipal-run Metro/Tram/Bus networks which are inexpensive to use. Post-war, Marseilles witnessed a large housing programme and this is symbolized by Le Corbusier’s ‘La Cité Radieuse’ which showed “another world is possible”. This experiment inspired imitations and concrete went up everywhere on the outskirts of Marseilles and other French cities. These became known as ‘les banlieues’, rent-controlled housing estates for the working class and beyond the pale for bourgeois society. In 2005, les banlieues were gripped by civil unrest for three weeks.

The emergency services sirens may be more subdued here but the state in the shape of the CRS riot police is in evidence. The CRS is notorious for its brutality towards young people, protesters and the Maghrebi and African populations. In the centre of an Algerian/African market, a CRS armoured truck is provocatively and obtrusively parked up.

On late night French TV talking heads discuss, “Qui était vraiment Mohammed Merah?” the man who was shot dead by the police in Toulouse on March after shooting seven people. France, unlike Britain, does not emphasise ‘multiculturalism’ but instead is a country proud of its secularism, expecting its ‘citizens’ to identify with the capitalist Nation-State of the Republic. The French capitalist state certainly does not want the working class to identify with its own class interests as it had done in history such as in 1871 and 1968.

Capitalism in France appears to be doing no so badly considering the world economic recession and the eurozone crisis (GDP growth was 1.7 percent in 2011). Just 45 minutes up country from Marseilles is the bourgeois town of Aix-en-France which is saturated by tourism and consumerism. France is still operating a mixed-economy of state-run industries, and a private sector. There is considerable rail infrastructure; trains and trams are built by Bombardier and Alsthom, the cars are Renault, Peugeot and Citroen, and there is a 35-hour working week.

As soon as Hollande was elected President in May he was summoned to Berlin to answer to the financial capitalists in charge in Europe. Recently the German Chancellor criticised Hollande for allowing the French economy to stall, and his plans to increase the cost to companies of laying off workers does not go down well with capitalist interests.

The ‘Parti Socialiste’ (PS) won a majority in the parliamentary elections in June. The main issue on French TV was Olivier Forlani of the ‘Divers Gauche’ standing against PS luminary Segolène Royal and eventually defeating her in the second round. Yet even this was overshadowed by the Feydeau farce that was Hollande’s new partner tweeting she wanted Forlani to win rather than Royal, the President’s ex-partner and mother of his four children. The deep sexism in French life was evident when female commentators asked: “How can Hollande run France if he can’t control his girlfriend?”

These events are a long way from ‘Les événements’ of May 1968 when a student strike developed into the largest general strike in history involving 11 million workers (2/3 of the workforce). The country came to a standstill, De Gaulle left the country for Germany to confirm he had the support of the French Army there and workers occupied the means of production. It ended with some concessions but with capitalism and capitalist political control intact.

The abolition of capitalism and the transformation to a socialist society is the only solution to France’s many problems. The capitalist class say that socialism is impossible because it is in their class interests to say so. All the ‘socialist’ parties, Leftist and Trotskyite groups in France offer policies to patch up capitalism and do not offer real socialism and can be described as ‘possibilists’. The Socialist Party of Great Britain’s sole aim is to achieve the goal of socialism and this has been described as ‘impossibilism’. In 1968 in Paris the cry was “Soyez réalistes, demandez l’impossible” and there can be no other way forward for human society but socialism.