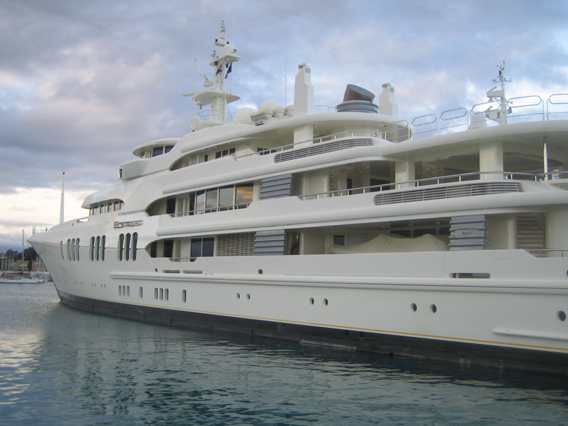 In any private-property society, there is always a boundary (which can be, and often is, changed from time to time) between those parts of the means of production (factories, farms, mines, transport) owned by individual members of the upper class, and those parts owned by the state itself – which is, of course, the executive committee of the upper class. From time to time, and for varying reasons, the state authorities may decide to unload part of the state’s holdings of these valuable assets. For example, in England in the 1530s, King Henry VIII took advantage of the jealous greed of the English upper class as they looked at the vast properties of the Catholic Church – perhaps amounting to a third of the land of England – and (since he was annoyed with the Pope for refusing to let him get rid of his Queen and marry a much younger woman who he hoped would give him a male heir) he declared himself to be the head of the English Church, and therefore owner of all the Church’s property. Being continually short of funds, he then sold or even gave away the church lands to favourites. So, anyone who had wormed himself into a position at court and could please the king through services more or less disreputable could get nice big estates very cheap or even free. Anyone who laughed the longest when the king made a joke or thought up the most obsequious flattery or was unscrupulous enough to do the king’s dirty work for him was in line for a big chunk of the former church lands. The reason so many of England’s old aristocratic families live in houses called something Abbey or something Priory is that they have estates which were pinched from the Church by Henry VIII and then handed on to some devious ancestor.

What happened then has happened again much more recently – different country, different century, but basically the same process at work. For England in the 1530s read Russia in the 1990s. The old state capitalist system, established by the Bolsheviks after the 1917 revolution, was breaking up. Those in power in the Russian Empire, the old U.S.S.R., were more and more coming to the conclusion that the modern world demanded less economic power in the hands of the state, and more economic power in the hands of individuals. Under Gorbachev, who was the top man from 1985 to 1991, permission was given for small businesses to start up outside state control. Under Boris Yeltsin, who was in power from 1991 to 1999, this trickle became a flood. It was help-yourself time. Anyone in the small circle of Yeltsin’s advisers and friends – or anyone who could chum up with anyone in that small circle – could get his hands on enormously valuable slabs of state property at knock-down prices. In 1990, Russia’s industries belonged to the state. By 2000, only a decade later, Russia’s industries belonged to a small group of men, who became known as the “oligarchs”.

This process was not risk-free, of course. To amass a multi-million pound fortune, and then to build it into a multi-billion pound bank balance, and to stop others grabbing your share, strong-arm methods were necessary. Gangsterism was rife. Rivals would be found dead and the police could never work out who had done the deed, particularly after they got their pay-off. Each oligarch, or would-be oligarch, had a squad of bodyguards, both to “deal with” (so to speak) anyone who stood in his way and to make sure rivals did not “deal with” him. These strong-arm men were, quite rightly, feared. One oligarch, Boris Berezovsky, ran a television company in Moscow; the man in charge of security at the television station was Andrei Lugovoy. He was a former KGB officer who worked for Berezovsky for nearly ten years. Then he apparently moved on to work for Mr Putin. Another former KGB officer, Alexander Litvinenko, alleged there was widespread corruption in the Russian government, and had to flee to Britain in 2000; there, he continued to attack Putin. On 1 November, 2006, Lugovoy came to see him; the same day he fell ill, suffering from poisoning by the radioactive substance, polonium-210. Traces of this material were found everywhere Lugovoy had stayed while visiting London – three hotels, a restaurant, two aircraft. Litvinenko wasted away, and died three weeks later; Russia refused to extradite Lugovoy, and soon after he was triumphantly elected to the Duma, Russia’s parliament. However rich you were, you wouldn’t want to annoy the employers of men like Lugovoy.

It was also essential to work out which way to jump when power changed hands at the top. Some people who were well in with Yeltsin were caught on the hop when Yeltsin finally retired to spend more time with his vodka, and Putin succeeded him. If you transferred your allegiance too soon, you would get nothing more from Yeltsin; if too late, you wouldn’t get anything from Putin. Boris Berezovsky’s television company dared to criticize Putin over the Kursk submarine tragedy. (In August 2000 the Kursk sank with the loss of all the crew, 118 men; 24 hours later Putin was filmed enjoying a barbecue at his holiday villa on the Black Sea.) Putin froze all Berezovsky’s Russian bank accounts, and Berezovsky fled to Western Europe – the poor man claimed he was down to his last million dollars (Times, 5 November). Now he dare not go back to Russia. (Even so, he is reportedly worth five hundred million pounds, no doubt the value of properties he was able to squirrel away abroad while he was still a big cheese in Russia.)

Table of journalist deaths under Presidents Yeltsin, Putin and Medvedev

Mikhail Khodorkovsky, once Russia’s richest man, thought he was powerful enough to start arguing with Putin, and bankrolling opposition groups; he now languishes in a jail near the Chinese border “for tax offences”, and the chances are that is where he will stay for the foreseeable future. The same happened to another oligarch, Platon Lebedev, who is also now in one of Putin’s jails. So, certainly, skill of a kind was needed, not only to seize your share of the goodies, but also to keep it.
Putin, of course, poses before the world as a true democrat. In fact, he is more or less a dictator, just like his predecessors who ran Bolshevik Russia. It is significant that Putin keeps in his office a statuette of Felix Dzerzhinsky, the founder of the Cheka, the Russian security police, forerunner of the KGB. Like all the figures that run Russia today, Putin (who made a name for himself as a KGB spy in East Germany) began, and continued, and reached high office, as a loyal member of what was called the “Communist” Party of the Soviet Union – the party which claimed that Russia was “communist” and “democratic”. Since Russia abandoned state capitalism, there must have been a million newspaper articles, television programmes, and radio broadcasts, celebrating the downfall of “communism”; to our knowledge there has not been a single article, programme or broadcast, celebrating the downfall of “democracy”. In other words, the opinion-formers round the world unanimously believe that when the rulers of the former USSR claimed to be “democratic”, they were the world’s biggest liars: but when the very same people claimed to be “communist”, they were completely truthful, and could be trusted to the hilt.

Not surprisingly, with billions of pounds at stake, disagreements often broke out among the oligarchs. Several court cases among Russian oligarchs are now, or soon will be, before British judges. Any court case in Russia would be decided quickly enough, of course: the litigant most favoured by Putin would win. But like all very rich men, the Russian oligarchs never bothered much with national boundaries – which are there mainly to keep the lower class in order (by reminding them which state they belong to, and are expected to fight for when business disagreements become open warfare). The oligarchs soon owned much property in many other countries, for example, in Britain. “In 2006, a fifth of all houses in the UK that sold for more than £8 million went to Russians” (Mail online). Unexplained fatalities are also exported. In 2004, a British lawyer, Stephen Curtis, had become very rich representing Russian oligarchs. He had a very good memory and could remember a lot of detail without having to commit too much to paper, which was an ideal way of doing business for many oligarchs. Curtis had a £4 million penthouse in London as well as a castle in Dorset and once spent £20,000 on a night out at Stringfellows. He had contacted the National Crime Intelligence Service with an offer to pass on information about his clients. Then he began to get threatening messages on his mobile phone from people with Russian accents. In March 2004 he told a friend, “if anything happens to me in the next few weeks, it won’t be an accident”. A week later he travelled down to Dorset in a brand new helicopter, with a very experienced pilot, and in reasonable weather conditions. People on the ground heard a bang, the helicopter crashed, and Curtis and the pilot were dead. There was not too much investigation of this surprising occurrence, and it was accepted as an unfortunate accident.

One case arising out of disagreements among the oligarchs is now being heard in London – Boris Berezovsky versus Roman Abramovich. The accounts in the press of the evidence in the case are fascinating. The British courts, naturally, are happy to hear disputes between such fantastically rich people as the Russian magnates – lawyers obtain fat fees acting for tycoons. Jonathan Sumption, QC, was announced last May as a coming judge of the Supreme Court – the old Law Lords – with the pleasant addition of a life peerage: when, that is, he chooses to take his promotion. He has postponed it for the time being in order to assist the interests of justice by representing Abramovich in the current case. In a letter to the Guardian in 2001, Sumption bemoaned being able to earn only a “puny 1.6 million a year”, but his probable fees in the Berezovsky case have been estimated at between three and ten million, so he will find it well worth while delaying his accession to the Supreme Court.
(Conclusion next month)
ALWYN EDGAR