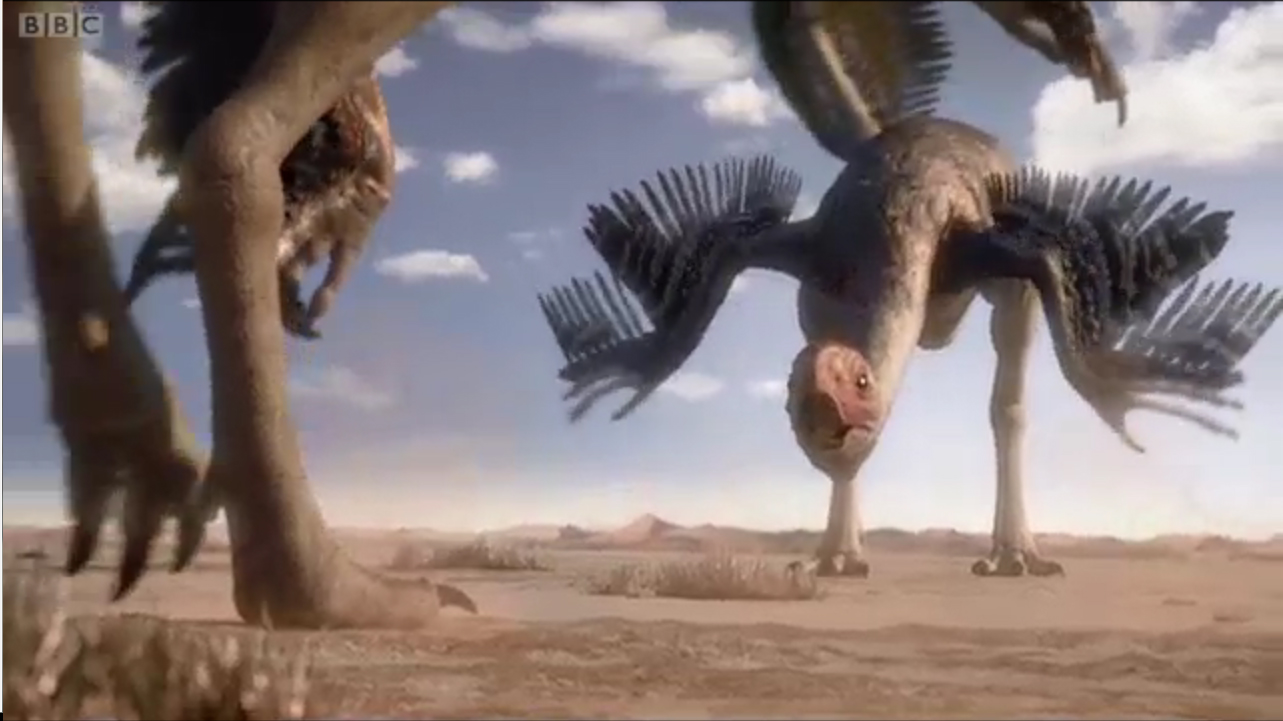 Bones of Contention
You’ll often find that socialists take a special interest in history and the ancient past. It’s something to do with taking the ‘long view’.  But you don’t have to be a socialist (or 6 years old) to be interested in dinosaurs, and with today’s computer generated images (CGI), it’s all a lot more fun than it ever used to be. The BBC’s new series Planet Dinosaur uses the kind of Hollywood-style special effects that made its 1999 Walking With Dinosaurs such a success. New technology and new discoveries have added hugely to the knowledge about dinosaurs in recent years, and the show’s star attraction will no doubt be the representation of feathered dinosaurs, until very recently the subject of heated controversy.
In the 1999 series too many unqualified assertions were made about dinosaur behaviour which could only have been guesses. This time the BBC has been careful to back up claims with evidence, letting the viewer follow the chain of reasoning, and making proper distinctions between fact and conjecture.

Yet still there’s a propaganda gloss on the scientific process, as if the audience somehow wouldn’t buy the real thing. The obsession with carnivorous monsters, and heavy repetition of words like ‘killer’ and ‘deadly hunter’, seem to assume the audience is on a five-second boredom timer and can only be motivated by blood and guts (ie that we are 6 years old). There is a curious moment when, in magisterial tones, we are informed that the fearsomely spiked tail of a stegosaurus is known as a ‘thagomiser’. What they don’t tell us is that this term started life as a joke by Gary Larson, in whose Far Side cartoon the caveman professor explains to the class that it is named ‘after the late Thag Simmons’. The Smithsonian Institute, having a sense of humour and no prior name of its own, promptly adopted Larson’s term, which is now semi-official. Joke names abound in science, but the BBC seems to disapprove.

What’s even more interesting than feathered dinosaurs is the row that scientists have been having about them. Consider the archaeoraptor debacle. When this fossil turned up from China in 1999, National Geographic reported that it was the missing link between birds and dinosaurs. This elicited a furious response from the Smithsonian which, losing its sense of humour for once, accused the magazine of reaching ‘an all-time low for engaging in sensationalistic, unsubstantiated, tabloid journalism’.  Why were they so upset? First, the link between dinosaurs and birds was at that time highly speculative; second, the article had preceded the scientific paper into print, meaning that according to the rule of precedent the rightful naming of the species had been effectively filched by the magazine; third, a term like ‘proto-feather’ committed the teleological fallacy, as if genes had a sense of predestination; fourth, the fossil had been illegally exported and should not have been touched by any reputable institution anyway.

Embarrassingly, the fossil turned out to be a fake, a fact that National Geographic might have learned if it hadn’t been in such a fever to publish. The story was reported with glee by the creationist lobby, ever desperate to find leverage. Though the dinosaur-bird link has since been established, the real scandal that came to light was not only the rampant trade in illegal and stolen fossils but the large numbers of forgeries that were appearing on the international market, mainly from unregulated China. The trade in fossils continues unabated, to the continued frustration of real knowledge, as much of the traffic is destined for the private collections of the rich and is thus unavailable for study.

You don’t have to be a 6 year old to like dinosaurs, but you do have to be a socialist to understand a world where people will steal and fake old fossils for the sake of a few dollars or yuan.  ‘Archaeoraptor’, by the way, means ‘old robber’.

It’s something when you go down the pub or the supermarket and everyone’s talking Einstein. But it happened recently after a world headline splash that some CERN physicists had sent some neutrinos on a faster-than-light trip through an Italian mountain. Not that anybody could make any sense of the story, not even the expert commentators. Assuming it wasn’t a mistake, either it was possible to travel faster than light, in which case the standard model of physics was in trouble, or the neutrinos were somehow skipping out the side window of another dimension and back in again, in which case the standard model of physics was still in trouble. Cosmology is in big trouble anyway, as 97 percent of the universe is officially missing (dark matter, dark energy) and large chunks supposedly keep disappearing (dark flow). And the quantum theorists are ready to string themselves up too, not having had a sniff of a decent theory in 30 years. Could life get any worse for physicists? Well, let them take a lesson from socialists. We’re optimists. We look forward to the day when everybody down the pub is talking Marx. That’s when the standard model of capitalism will be in serious trouble.

Finding fault among the fault finders
Where there’s blame there’s a claim, so now they’re prosecuting scientists for not predicting an earthquake (www.nytimes.com/2011/10/04/science/04quake.html). This seems a tad unfair since nobody is suing the bankers for not predicting a global economic disaster, even though they helped cause it.
“No one expected to be told the exact time of the quake”, said one plaintiff, “We just wanted to be warned that we were sitting on a bomb.”

You would have thought that 400 tremors in the previous 6 months would be a sizeable clue, and that only a lit and sparking fuse leading directly up into the rectal cavity could give greater cause for alarm. But you’d be wrong, because the local seismic survey team reported that the risk was still low. This low risk was however translated by local officials into ‘no risk’, a prediction which turned out to be spectacularly wrong, and the writs started landing before the masonry had finished falling. The problem was that people wanted a categorical yes or no statement, and the fact that you can’t expect that kind of answer from a seismologist somehow got lost in the ensuing uproar.

People have strange ideas about science. Half the time they hate it and don’t believe a word of it, the rest of the time they seem to think it is capable of performing miracles. A bit like how people see capitalist politicians, come to think of it. It seems inconceivable that any law court would really convict the scientists, but if they do then presumably we can all start suing the Met Office every time the rain ruins our washing.