Outrage is Not Enough 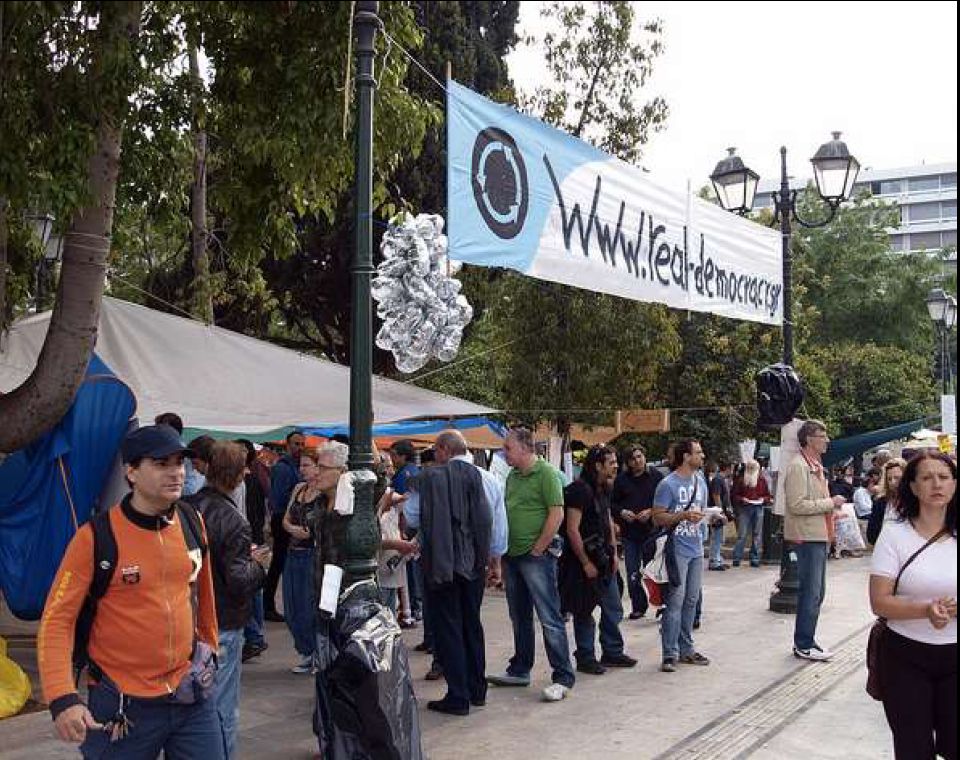 Capitalism has shown that it cannot meet people’s needs properly, not even in the developed countries of the West, let alone in the rest of the world. In a world capable of providing enough for all, austerity is being tightened on people everywhere. Political democracy, despite its advantages, has become an empty shell, with popular participation limited to giving the thumbs up or the thumbs down every few years to rival bands of professional politicians and with fewer and fewer people bothering to do even this. Social disintegration is gradually spreading, with increasing mental ill-health, drug addiction, crime and anti-social behaviour.

Most people are aware of this, but don’t think they can do anything about it. They don’t like it, but accept it as something they have to put up with as they try to make the best of their life and that of their family. This has been called apathy, but it’s really more resignation or fatalism.

Socialists find this frustrating as we know that, if people chose to, they could get rid of capitalism and establish a different world in which not only could people’s material needs be met as a matter of course but where a genuine community would exist. This is why we can only welcome any sign of people beginning to realise that present-day society has nothing to offer them and to think about doing something about it. The latest example of this is the Real Democracy Now! movement that started in Spain in May with the slogan ‘We are not commodities in the hands of politicians and bankers’ and who call themselves the ‘Indignados’ (the outraged). See their manifesto opposite. A similar movement has arisen in Greece.

Regular readers of this journal will be able to see the manifesto’s limitations, but what is significant is that here are some people who are beginning to see through capitalism, even if they haven’t worked out what going beyond it has to involve. A welcome feature of the movement has been the democratic, non-violent nature of the public meetings, indoor and outdoor, that they have organised, at which all points of view, including the socialist, can be expressed.

The manifesto is intended to be an appeal to ‘ordinary people’ by other ‘ordinary people’ who consider themselves (and in fact are) the victims of the present system without a say in how things are decided. Some of its points are clearly true:

‘The will and purpose of the current system is the accumulation of money, not regarding efficiency and the welfare of society. Wasting resources, destroying the planet, creating unemployment and unhappy consumers.
Citizens are the gears of a machine designed to enrich a minority which does not regard our needs. We are anonymous, but without us none of this would exist, because we move the world.’

In view of our tradition, we prefer to talk of ‘workers’ rather than ‘citizens’ but we are not going to quibble over a word because it is true that, whether we are called or call ourselves citizens or workers, we run society from top to bottom but for the benefit of a privileged minority.

When it comes to describing the outlines of an alternative society, we wouldn’t employ the language of ‘rights’. We agree of course that everybody should be able to automatically satisfy their need for housing, education, health-care and culture (entertainment) and should also be able to have enjoyable work and a say in the way things are run.  But to describe these are ‘rights’ is to give credence to the illusion that there are ‘inalienable truths’.

In any event, there is no ‘inalienable’ right to ‘employment’ or ‘consumer protection’ as these would only be applicable in a capitalist society, where work takes the form of paid employment and where people have to buy what they need. But, given capitalist society, they are not achievable as both a reserve pool of labour and an underclass of unemployables are necessary, endemic features of capitalism. As long as there is buying and selling, some sellers will always try to swindle buyers, as the Romans understood when they coined the phrase ‘Buyer, beware’.

This brings us to our fundamental criticism of the proposed alternative. There the manifesto states ‘instead of placing money above human beings, we shall put it back to our service’. In other words, it proposes to retain money and all that implies, and to try to make the system serve human needs and interests. The full implications of this become clear when the practical proposals published elsewhere on their site (www.democraciarealya.es) are examined (our translation).

‘Reduction of working time and a better balance between work and family life, so as to eliminate structural unemployment (i.e. until unemployment falls below 5 percent).’
‘Retirement at 65 and no further increase in the retirement age, so as to eliminate youth unemployment.’
‘Security of employment: prohibition of collective redundancies for large corporations that are making profits.’
‘Banks in difficulty must be allowed to fail or be nationalised to create a public bank under social control.’
‘Increase in the rate of tax on wealth and the banks.’

This is very disappointing as it is the sort of thing that reformist politicians have long promised. They have never delivered. Why? The suggestion of the Indignatos seems to be that it’s because these politicians seek to enrich themselves as they are not subject to democratic pressure from below. The evidence, however, points to another reason – because they could not deliver even if they were sincere or subject to outside democratic pressure as capitalism is inherently incapable of being made to serve the interests of all the people.

Capitalism is a class-based society which can only operate for the benefit of the minority who own and control productive resources, as rich individuals or through private corporations or the state. This is the reason for the failure of all reformists politicians and governments in all countries. In Spain it is the reason for the failure of the PSOE (literally the Spanish Socialist Workers Party) which started out with a much more radical programme than above.

Things would not be any different if members of parliament were elected by and were responsible to democratic assemblies, as Real Democracy Now! wants. Capitalism just cannot be reformed to work in the interests of workers and their families (or ‘citizens’ if you prefer). If Real Democracy Now! goes down this road they are doomed to failure and disillusionment. A genuine, participatory democracy is part of the solution but is not the solution on its own.

As they state in their manifesto, ‘the will and purpose of the current system is the accumulation of money, not regarding efficiency or the welfare of society.’ Precisely. Capitalism is a system of capital accumulation out of monetary profits extracted from the labour of those who ‘move the world’. This gives rise to economic laws which impose that priority be given to profits and profit-making rather than to satisfying people’s needs. No government, no pressure from the street, no riots, can change this. Any government, however democratically elected and accountable, that takes on responsibility for governing within the framework of capitalism is obliged to respect these economic laws or make things worse by provoking an economic crisis.

What is required is a revolution but not an ‘ethical revolution’. It is a revolution in the basis of society, to be carried out, yes, by democratic means and more or less peacefully, that will make productive resources the common heritage of all under democratic control. Within this framework alone can production be re-oriented towards satisfying people’s needs while at the same time respecting their welfare at work and the welfare of the rest of nature. This involves the end not just of the accumulation of money by a minority, but the disappearance of money altogether.
ADAM BUICK

Democracia real YA! Manifesto
We are ordinary people. We are like you: people, who get up every morning to study, work or find a job, people who have family and friends. People, who work hard every day to provide a better future for those around us.

Some of us consider ourselves progressive, others conservative. Some of us are believers, some not.

Some of us have clearly defined ideologies, others are apolitical, but we are all concerned and angry about the political, economic, and social outlook which we see around us: corruption among politicians, businessmen, bankers, leaving us helpless, without a voice.

This situation has become normal, a daily suffering, without hope. But if we join forces, we can change it. It’s time to change things, time to build a better society together. Therefore, we strongly argue that:

The priorities of any advanced society must be equality, progress, solidarity, freedom of culture, sustainability and development, welfare and people’s happiness.

These are inalienable truths that we should abide by in our society: the right to housing, employment, culture, health, education, political participation, free personal development, and consumer rights for a healthy and happy life.

The current status of our government and economic system does not take care of these rights, and in many ways is an obstacle to human progress.

Democracy belongs to the people (demos = people, krátos = government) which means that government is made of every one of us. However, in Spain most of the political class does not even listen to us. Politicians should be bringing our voice to the institutions, facilitating the political participation of citizens through direct channels that provide the greatest benefit to the wider society, not to get rich and prosper at our expense, attending only to the dictatorship of major economic powers and holding them in power through a bipartidism headed by the immovable acronym PP & PSOE.

Lust for power and its accumulation in only a few; create inequality, tension and injustice, which leads to violence, which we reject. The obsolete and unnatural economic model fuels the social machinery in a growing spiral that consumes itself by enriching a few and sends into poverty the rest. Until the collapse.

The will and purpose of the current system is the accumulation of money, not regarding efficiency and the welfare of society. Wasting resources, destroying the planet, creating unemployment and unhappy consumers.

Citizens are the gears of a machine designed to enrich a minority which does not regard our needs. We are anonymous, but without us none of this would exist, because we move the world.

If as a society we learn to not trust our future to an abstract economy, which never returns benefits for the most, we can eliminate the abuse that we are all suffering.

We need an ethical revolution. Instead of placing money above human beings, we shall put it back to our service. We are people, not products. I am not a product of what I buy, why I buy and who I buy from.