Pathfinders: Plastic Waste – Is There a Solution? 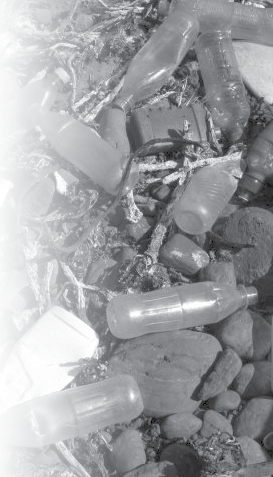 ‘Protecting the environment is in our hands’ –  a bold statement printed on a large supermarket chain’s plastic bags. The implication is that these bags are special, better than before or better than other ones. But are they really? The implication is also that it is consumers who are responsible for the state of the environment depending on the choices they make. Much money is spent on advertising and public relations to convince us of that responsibility; buy our product and know you’re supporting a worthwhile cause; use this product and do less damage to wildlife; for every one of these you consume 10p is donated to protecting dolphins/saving coral reefs/planting trees/rescuing donkeys etc, etc, ad infinitum. The poorly informed consumer, kept in the dark and fed mostly green bullshit is neatly handed the responsibility for consequences of decision making processes in which they played no part.
Plastics are polymers which do not, cannot, biodegrade. They cannot be decomposed by bacteria or other living organisms. What they do do is photodegrade, break down in light to smaller and smaller pieces, eventually becoming minute particles of polymer dust which stay around forever. Some of the latest technology claims that plastics with certain additives will degrade safely and more quickly given the correct conditions, i.e. carefully controlled landfills or industrial composters. The biggest challenge for composters is that they can only deal with discrete types of plastic and must not be contaminated with mixed lots – and they are few and far between because of the monetary cost.
Landfill conditions vary widely and are recognised by environmentalists as being far from the ideal method of dealing with plastics. Current estimates for worldwide recycling of plastics is in the region of less than 5 percent, one reason being that there are so many different kinds of plastic. Recycling codes on packaging and containers trick consumers into believing such waste will be recycled after collection but there are at least seven different codes, all requiring different, separate methods of treatment, the outcome being that most of it is just dumped.
As to how much is dumped it is probably impossible to say, however one recent estimate gives a figure of 65lbs of plastic waste per capita per annum in the USA. If we were to take a per capita figure for the whole of worldwide population of just 1lb per annum, 95 percent of which would be dumped, it works out at somewhere around 2.5 million tons. (At 10lbs 25 million tons, at 65lbs 160+million tons) – just plastic.
For many decades a number of countries around the world had a policy of dumping household and industrial waste directly into the seas and although this policy has changed in certain areas the accumulated waste of plastic and its toxic chemical components are still there and are being added to daily. One estimate is that currently 80 percent of ocean rubbish is from the land and 20 percent from shipping. A single 3,000 passenger cruise ship accumulates about eight tons of waste weekly.
It was first predicted in 1988 that rubbish would be accumulating in the North Pacific gyre, a whirlpool created and moved around by the currents. Its existence was discovered to be true in 1997 when it was happened upon by Charles Moore returning from an ocean race when he sailed through a vast expanse of floating rubbish. The extent of the rubbish is difficult to measure as the particles are mostly broken down into tiny fragments and cannot be seen from the air, but they extend both outwards and downwards over an area variously claimed to be between the size of twice that of Texas to the overall size of the USA.
Subsequent ongoing research has determined that the plastic concentration in this gyre is 6-7 times that of zooplankton, the basic foodstuff of oceans, and is continuously ingested by wildlife along with the absorbed organic pollutants which it attracts. Decomposition leaches toxic chemicals such as bisphenol A, PCBs etc., causing hormonal disruption right through the food chain from the tiniest organisms to birds, fish, reptiles and mammals, including humans. Moore’s team’s research recently estimated this particular ocean gyre to contain in the region of 100 million tons of rubbish. In the past decade it has been confirmed that this huge ocean rubbish tip in the North Pacific is not alone; there are now known to be another four – one each in the South Pacific, North Atlantic, South Atlantic and Indian Oceans. An informative website including a ten minute video can be accessed at www.algalita.org.
A trawl of the internet shows that there is little interest from big business in using less oil-based resources in general manufacturing and packaging; that landfill sites are full to overflowing with no solution in sight and scant reference from governments; that profit-based schemes win out over environmentally sound ones; that there are limited moves towards more recycling in only a minority of countries. China now both exports plastic goods and imports waste plastics for recycling and remanufacturing in order to export more plastic goods – at what cost to the environment? And the rest of the world is complicit because it’s cheaper that way.
As consumers we can separate and recycle our rubbish diligently and have a (baseless) expectation that ‘the authorities’ will take care of the next stage but protecting the environment will only really be in our hands when the system is in our hands.
JANET SURMAN