‘A spectre is haunting Europe – the spectre of Communism.’

This is the famous opening sentence of The Manifesto of the Communist Party by Karl Marx and Frederick Engels. The original Manifesto of 1848 listed some progressive reforms, but ceased advocating them by 1872. The measures – ranging from nationalisation to a heavy progressive or graduated income tax – may have had merit in 1848 but not today. Indeed, Marx and Engels in their joint preface to the 1872 edition stated: ‘No special stress is laid on the revolutionary measures proposed at the end of Section II. That passage would, in many respects, be differently worded today.’ Yet this does not stop our opponents, particularly on the Right, from resurrecting ideas, long dead and buried, to besmirch socialism/communism. The Mises Institute, for example, has used them to suggest that socialism is to blame for the suffering of our class in state capitalist Venezuela. More recently, in an article titled ‘How the Presidential candidates rehash failed communist ideas’ (thedailybell.com, 15 October), Joe Jarvis writes ‘Marx would fit right in running for President amongst the current crowded field of “democratic socialists” clamoring to one-up each other with the most communist platform. For instance, Bernie Sanders’ platform includes a top estate tax–aka inheritance or death tax–of 77%.’ Later, for good measure, he adds the failings of Bolsheviks and state capitalist China to the mix. Pure nonsense of course because, as Rosa Luxemburg said succinctly, ‘without the conscious will and action of the majority of the proletariat, there can be no Socialism.’ 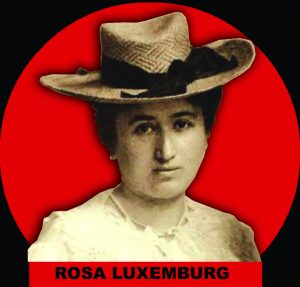 ‘Social democracy is nothing but a stinking corpse’

This is Rosa Luxemburg again, in a speech to the founding conference of the KPD (German Communist Party). This, like Marx and Engel’s spectre, was rather premature. Even Jarvis in his article notes: ‘This list included things like free public education, a progressive income tax, and a state-owned central banking monopoly. That’s all been accomplished of course.’ Socialists acknowledge that certain reforms won by our class have helped to improve general living and working conditions. Examples are to be found in fields such as education, housing, child employment, work conditions and social security. However, such ‘successes’ have in reality done little more than keep workers and their families functioning as the fundamental relationship between worker and capitalist remains unchanged. ‘Capital is dead labour, that, vampire-like, only lives by sucking living labour, and lives the more, the more labour it sucks. The time during which the labourer works, is the time during which the capitalist consumes the labour-power he has purchased of him’ (Karl Marx, Capital, Chapter 10, The Working Day). The reforms which today’s Social Democrats and others pursue will not end war (‘Americans want an end to forever wars. But that’s not what Trump offers’ (theguardian.com, 18 October) and poverty (‘Essex lorry deaths: All 39 migrants found dead were Vietnamese nationals, police say’, mirror.co.uk, 1 November).

The Communist Manifesto: ‘What the bourgeoisie, therefore, produces, above all, is its own gravediggers. Its fall and the victory of the proletariat are equally inevitable.’ Don’t despair! One Dr. Rogers, researching into early societies, was once quoted in the Guardian (17 December, 1980) as saying: ‘I do not think aggression is innate. I think aggression is something that man learns. Aggression comes as soon as you get possessions’. More recently (29 October, 2017) in the same paper there is a fascinating report on the Ju/’hoansi people of the Kalahari. ‘They have always been fiercely egalitarian. They hate inequality or showing off, and shun formal leadership institutions. It’s what made them part of the most successful, sustainable civilisation in human history.‘ ‘The internet was brought about by widespread voluntary cooperation, open standards and freely-produced software. Capitalism only made it unbearable and unusable with pop-up ads, overlay ads, full-page ads, prevideo ads, autoplay videos, firewalls, data regulations and malware’ (@OfficialSPGB, 31 October). We also agree with author Arundhati Roy that ‘Flags are bits of colored cloth that governments use first to shrink-wrap people’s minds and then as ceremonial shrouds to bury the dead’ (socialist-courier.blogsot.com, 2 November).

Learning from the dead

Socialism, as originally expressed by the followers of Robert Owen, appeared for the first time in their Co-operative Magazine of November 1827 and meant common ownership (not nationalisation or state capitalism). Later, in 1875, at the first meeting of the German Social Democratic Party, Eduard Bernstein and others claimed that capitalism could be reformed to meet working class interests. By championing gradual, ethically-inspired reforms they rejected socialism’s revolutionary and materialist foundations and paved the way for the likes of the UK Labour Party.