So said a bloke in a flat cap when asked by a 1980s film crew about what preparations could and should be made for nuclear war. It’s hard now to empathise with the grim expectation that the bomb would drop which coloured life through the Cold War; even current worries about climate change don’t carry the same dread, somehow. The mood of the time was conveyed well in BBC4’s recent Arena documentary A British Guide To The End Of The World, which also brought home how those with their finger on the button felt about the rest of us.

The programme covers two aspects of the possibility of nuclear war: the provisions for ‘civil defence’ in Britain from the 1950s onwards, bookended by footage of soldiers who took part in nuclear bomb tests. The documentary is made from archive film and narration from the soldiers and civil defence staff, including excerpts from earlier programmes, such as a 1980 edition of Panorama called If The Bomb Drops.

In 1957, groups of British soldiers went on a four-week cruise across the Pacific Ocean to the tropical paradise of Christmas Island. The soldiers made the most of free time spent swimming among the fish around the beautiful reefs, while above them soared flocks of guillemots and gannets. ‘It was everything you could have dreamed of, but nobody knew anything at all about why we were there’. Between exploring the island and partying, the soldiers worked on building a runway and hangars. When they learned they were there to test nuclear weapons, they were told they weren’t in any danger, even though the scientists and senior staff had been issued protective clothing and the indigenous people had been shipped out. The soldiers sat on the ground and waited, while loudspeakers played upbeat music. The bombs, a thousand times stronger than those used on Japan, were dropped from planes and exploded as few as 23 miles away from the camp. ‘The flash seems to come through the back of your head. You could see the bones in your fingers through your closed eyes, bearing in mind the light was not in front of you, it was behind you’. They were then ordered to watch the explosion, ‘like the creation of another sun’, an ‘angry, evil-looking thing’. The loudspeaker voice ordered them to find cover for when the ‘pressure wave’ blasted across the island. The bomb had sucked the sea up into the sky, which then fell down as blackened rain. Flocks of birds were also caught in the blast, and hundreds of burning guillemots and gannets landed around the island. Later, the soldiers were sent to collect the bodies, which had formed a ‘floating crust’ washed up on the beach. The soldiers didn’t talk about what they had experienced: ‘it happened, and that was that’. The film ends by detailing the longer-term effects on the soldiers, such as cancer and infertility. One man thinks that not being able to have children might be for the best, as other veterans’ sons and daughters had health problems linked to radiation poisoning. Unearthed documents show that the soldiers, and their children, were being used as part of an experiment to see what effects the bomb would have on people.

So it was with this information that governments through the Cold War years made preparations for how Britain would cope with a nuclear attack, although ‘preparations’ is probably an overstatement. At the time, it was widely accepted that the recommendations of how we could ‘protect and survive’ would be woefully inadequate. 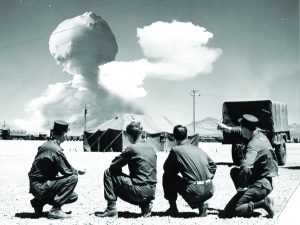 Any advance notice of nuclear war would have come through hundreds of smallish boxes distributed to community hubs around the country. These early warning systems would make constant bleeping noises, which would stop when the bombs were on their way. The one in the pub in Monyash, Derbyshire, was often switched off as the bleeps soon became annoying. And as the village didn’t have a siren, the pub’s landlord would instead give the four-minute warning by cycling through the village shouting ‘the Russians are coming’. A man in a parka was designated to be responsible for law and order in a post-apocalyptic Monyash, meaning that he would get a few lads together to see off any radioactive refugees from elsewhere. How to deal with people ‘wandering around’ was also tackled by the civil servants shown acting out attack scenarios. ‘They’re going to die anyway, so what’s the point of bringing them under cover?’ says one of them, nonchalantly. These practice scenarios were played out in secret underground local government shelters, which in a war would co-ordinate reports from other monitoring stations. These bunkers were luxurious compared with the shelters recommended for the rest of us: under a table or a lean-to made from doors, shielded by bags of clothes and boxes of books, or in a shored-up trench in the garden. Anyone with several thousand pounds to spare could splash out on a swankier underground shelter, complete with hand-cranked air filter, although if the bomb dropped, would this just be a more upmarket coffin?

As the documentary shows, any provisions which might have looked good on paper would likely have had ridiculously little practical worth in a nuclear holocaust. One of the civil servants featured says that the plans were largely just to persuade people that what they were doing was a worthwhile exercise. The risks and dire consequences of nuclear weapons were downplayed by the authorities, both to the soldiers on Christmas Island and the people who would have to rely on makeshift shelters and local militias. The civil defence plans and the soldiers’ stories have in common a contempt for those lower down the social ladder from the government and senior military. Behind the threat of nuclear war, the class war was the real conflict taking place.