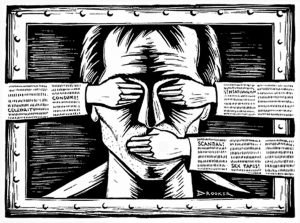 Here’s an easy question – what’s your view of censorship? If you’re a socialist and a democrat, you’re probably against it. After all, you argue, the only really effective way to combat bad ideas is to bring them out in the open and put them up against good ideas, and you can’t do that if the bad ideas aren’t allowed to circulate in the first place.The battle of ideas must be fought in public or it becomes totalitarianism.

So how fares this public battle today? Not well, actually. Everyone knows that society has changed rapidly in the last two decades. The mass-market passive consumerism of the twentieth century has given way to the individualistic, two-way street of the internet. But instead of this opening up debate it seems to have done the opposite. Very few people would include a public political meeting as part of their normal week’s activity. Street-corner debates are a distant memory for the oldest among us. Now ideas don’t normally challenge each other in large open auditoriums. Instead they exist in largely separate and closed worlds where each person sees what they want to see.

This is not to say that the concern over social media echo chambers should be overstated. Social media groups tend to reflect the organic composition of friendship networks, which don’t typically consist of one exclusive type of belief or idea. Sure, you may not be besties with a Tory, but you probably know one or two, and you may have friends or relatives who think differently from you on a lot of issues. Social networks are like Venn diagrams, overlapping each other in a multi-dimensional nest. Comfort zones they may be, but most people don’t want or expect them to be hermetically sealed.

At least, not reasonable people.

But in the pressured depths of the web where reasonable people don’t go there are unmoderated groups where something quite different is going on. Here the most one-dimensional views are expressed, and there are no dissenting voices to challenge them. Here is where a macabre game of Dare is played out. Far-right bedroom trolls take over a forum and use it as a playground to make violent death threats against black people, Hispanics, Moslems, Jews, gays or some other minority. It’s just talk at first, but the feedback loop ramps it up as each participant tries to outdo the last. Finally someone ups the ante to the limit, thereby winning the kudos and respect of all participants. What is this limit? Carrying out the death threat in reality.

This is what is thought to have happened on the 8chan discussion forum prior to the shootings in El Paso in August, when 22 people were killed and 24 injured, and the next day in Dayton, Ohio, where nine people were shot dead and 27 injured. 8chan was also used by the shooter in April’s Poway synagogue shooting in California, and in the mosque massacres of Christchurch, New Zealand, in March, where 51 were killed and 49 injured, and where the shooter live-streamed the massacres on Facebook.

Let’s take a moment to revisit that ethical question on your view of censorship. Given the track record of 8chan, if it was in your power to close it down by pressing a big Kill button, would you do it? Or would you defend 8chan in the name of free speech, saying as some US Republicans did at the time, that’s the price you pay for liberty?

Of course there was no shortage of hackers keen to take 8chan down. One easy way to do that would have been to launch a Distributed Denial of Service (DDoS) attack on it by bombarding it with traffic until its servers ground to a halt. But this wasn’t possible because the site was protected by online security firm Cloudflare. After the Dayton shootings however, the owner of Cloudflare finally pulled the plug, saying: ‘8chan has repeatedly proven itself to be a cesspool of hate. They have proven themselves to be lawless and that lawlessness has caused multiple tragic deaths’ (BBC News, 5 August – bbc.in/2lX1r6T).

8chan duly went offline almost immediately, however its users will certainly migrate to a different forum and continue as before. Even if you agree that ‘free speech’ has limits and such sites need to be stopped, the question is how. The internet is just too big.

Artificial Intelligence is held up as the great unbiased censor, the thing that might save society from its own worst nightmares, however the hype around AI is a good deal more advanced than the technology itself. AI is good in situations with finite options and clear rules, which is why it can beat the world’s top game-players. But ask it to make a value judgment or an ethical call, and it won’t have a clue.

Εven so, it’s good enough to ‘benevolently’ censor you. AI manages what you see on the GAFA big four (Google, Apple, Facebook and Amazon), sifting your data to serve up what it thinks you will like and hiding what you won’t. That’s why two people doing the same Google search will get different results. Meanwhile YouTube’s algorithms attempt to keep users on-site by serving up material on a ‘same-but-even-more-so’ basis. With an estimated 500 hours of material loaded every minute, YouTube can’t possibly keep track of its content. Thus, right-wing extremists end up being offered ever more extreme right-wing material, so that the site may be upping the ante in the same way as 8chan. Some people are demanding that it changes its algorithms in favour of more balance, while others are calling for it to be shut down altogether (New Scientist, 24 August).

There is, though, another reason to be highly resistant to any kind of censorship. What if they turn it on us? In China open dissent is impossible. People have to use secretive Virtual Private Networks to hide their identity when accessing forbidden western resources like Wikipedia. No wonder Hong Kongers are fearful. Who’s to say other states wouldn’t adopt Chinese tactics if it saved them money and created more docile populations?

What’s worrying about certain one-dimensional internet trends and also calls for more censorship is their general intention to disable the human critical faculty. They’re not interested in debate, they are engaged in whiter-than-white brainwashing, and never mind the victims or the collateral damage. In a way that’s the holy grail of capitalism too. It aims to create the perfect customer, even at the cost of the perfect storm.