In the September issue (‘Mental Health: In a Mad, Mad World’) you seem to give some credence to the theory that mental illness arises from a chemical imbalance in the brain and that antidepressant drugs work by restoring the balance. In your version of the theory the balance that needs to be maintained is that between serotonin, dopamine and oxytocin. The first two of these are neurotransmitters, the third a hormone; they perform quite different functions.

There are other versions of the theory. Often the theory is presented without specifying the substances that have to be ‘in balance’. The ratios that constitute ‘balance’ or ‘imbalance’ are never indicated. Nor is it ever explained why it is essential to maintain such ratios. Even if it were established that certain ratios among specified substances have to be maintained, no instruments exist to measure such ratios in a patient’s brain. There is no way for a physician to determine what quantities of which substances need to be added to achieve balance or check whether a drug has restored balance or just created a new imbalance.

Strictly speaking, this is not a theory at all but a poorly formulated hypothesis that is never proven but is endlessly repeated in order to convey the false impression that the biochemistry of mental illness is understood and sell the drugs that allegedly correct the imbalance.

The drugs prescribed for mental illness mess around with the brain in various complex and poorly understood ways. They may relieve distress by dulling all feelings, good as well as bad, but at the cost of serious ‘side effects’ and harm to the brain. Some drugs entail heightened risk of aggression or suicide.

We agree with much of what you say, and of course you’re correct to distinguish between a hormone and a neurotransmitter. But we’re not sure we’d want to throw all psychiatry – the treatment of mental health conditions with drugs – out of the window, given that many conditions, for example schizophrenia, are known to occur across family generations and therefore seem to have some genetic component. The article rightly argues that environment and biology are both factors. 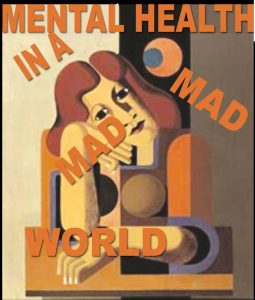 of chemicals in the brain. You seem to reject this theory because nobody knows what that balance is, or even how to measure it, yet it seems to us that an optimal evolutionary balance must logically exist. We can’t see what you’re objecting to here. If there are stressful environmental factors at play, these will trigger ‘fight or flight’ hormones like cortisol and adrenaline which will in turn alter the brain chemistry. Conversely, if someone pops an ecstasy pill at a festival they’ll be flooded with dopamine and oxytocin hormones, and that will change their behaviour towards others. So environment changes chemistry and chemistry changes environment.

Of course it’s true that the chemistry of the brain is poorly understood, and that advances are achieved more by trial and error than by sound theory, but the same could be said of most branches of medicine, and even most branches of science. Some drugs have caused unexpected and disastrous side effects but that’s why the testing procedures are so long and complex, and we certainly wouldn’t want to reduce those in socialism.

The article’s larger point, with which you surely won’t disagree, is that a huge proportion of the world’s mental health problems, including epidemic rates of suicide, are caused directly or indirectly by the capitalist system itself, and that no amount of drugs is going to make that particular problem go away. – Editors.