Extinction Rebellion: what do they stand for?

As its name suggests, Extinction Rebellion (XR) holds the view that continuing to emit greenhouse gases is leading to a change in the Earth’s climate that would be so drastic as to threaten the ‘extinction’ of the human and other animal species, and that this justifies a ‘rebellion’ in the form of civil disobedience and getting arrested for blocking roads, bridges, and government and fossil fuel company buildings.

The political philosophy behind their ‘Declaration of Rebellion’ of 31 October 2018 is strangely old-fashioned. It is based on the idea that there is an implicit social contract between a state and its citizens, under which the state agrees to protect its citizens and guarantee them human rights and democracy while in return the citizens agree to pay taxes and obey the law. According to the declaration, by not doing enough to deal with global warming, the state has broken its contract, so:

‘We hereby declare the bonds of the social contract to be null and void; the government has rendered them invalid by its continuing failure to act appropriately’ (https://rebellion.earth/declaration).

Or, more prosaically, as Sutton Local XR put it in a leaflet, ‘the Government has failed to protect us’.

Nevertheless, XR’s demands are directed at the government. They demand that it adopt the aim of achieving net zero carbon emissions, i.e., that no more is released into the atmosphere than is extracted from it, by 2025. Again more simply, as one of those blocking the A38 in Birmingham at the beginning of August put it, ‘what we are here to do is force the government to pay attention to the issue of climate change and take urgent and decisive action’ (www.bbc.co.uk/news/uk-england-birmingham-49263916).

At this level, this is pure reformism, calling on a capitalist government to implement some desirable measure within capitalism. This is probably all that most of those taking part in XR activities want or expect.

However, their leaders are more ambitious. They envisage overthrowing any government that refuses to accede to XR’s demands. As described by one of their prime movers, Roger Hallam, this begins with only a few thousand practising civil disobedience but eventually: 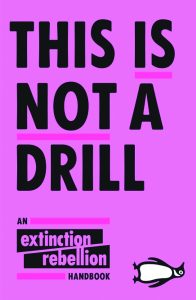 ‘The arrogance of the authorities leads them to overreact, and the people – approximately 1-3 per cent of the population is ideal – will rise up and bring down the regime. It’s very quick: around one or two weeks on average. Bang: suddenly it’s over’ (XR handbook This Is Not A Drill, p. 104).

XR’s Media and Messaging Coordinator, Ronan McNern, explains how this figure was arrived at:

‘Our media messaging is based on research by Erica Chenoweth and Maria J. Stephan, which demonstrates that to achieve social change the active and sustained participation of just 3.5 per cent of the population is needed. It’s that 3.5 per cent that we want to engage’ (p. 126).

There is some ambiguity here. Hallam writes of bringing down the regime while McNern writes of achieving social change. Nor is it clear what McNern means by ‘social change’: is it a change of society (a social revolution) or a change within existing society (social reform). A statement on XR’s website seems to settle this in favour of the former, saying that one of its aims is ‘mobilising 3.5% to achieve system change’ (https://rebellion.earth/the-truth/about-us).

Hallam might be right about bringing down a regime (the state-capitalist regimes in Eastern Europe did collapse in that sort of way) and McNern about achieving some overdue political measure that is no threat to the system (as the Civil Rights movement in the Southern states of the USA), but 3.5 percent cannot bring about ‘system change.’

XR are rather ambiguous about what they mean by ‘system change’, but they do identify capitalism and its drive to perpetual economic growth as the problem and they do emphasise that any post-capitalist society should involve a participatory democracy for decision-making, with citizens assemblies and the like. So the question arises: how could a minority of 3.5 percent bring about a participatory democracy (let alone the common ownership of the Earth’s resources that socialists want in addition)?

A participatory democracy has to be based on voluntary participation and voluntary cooperation. It is not something that can be imposed on people; they must want it and understand its implications. At the moment this is far from being the case. Even if Hallam’s 1-3 percent minority did succeed in bringing down a government that refused XR’s demands, this would still be the case. In the absence of a majority wanting system change, the system would remain the same, i.e. capitalism, and the emergence of an understanding and participating majority would still be needed.

Unfortunately, that’s going to take time, more time in fact that XR ideologists, and Hallam in particular, think is needed to avoid climate catastrophe. Interviewed on BBC News Hardtalk on 16 August by Stephen Sackur (https://youtube/9HyaxctatdA), Hallam claimed that, if things continued as now, in ten years’ time there would be ‘social collapse’, the beginning of a period in which only one billion of the world’s current population of 7 billion would survive:

‘The capitalist system, the global system that we are in, is in the process of destroying itself and it will destroy itself in the next ten years. The reason for that is because it’s destroying the climate’.

The message is hopeless in both senses of the word: since, given that most people don’t want to replace it with common ownership and democratic control of the Earth’s resources (socialism, properly understood), capitalism is not likely to be abolished within the next ten years, humanity and the planet are doomed; six out of every seven of us are going to perish in the Armageddon that will begin in ten years’ time, i.e in 2029.

But are the prospects really that bad? 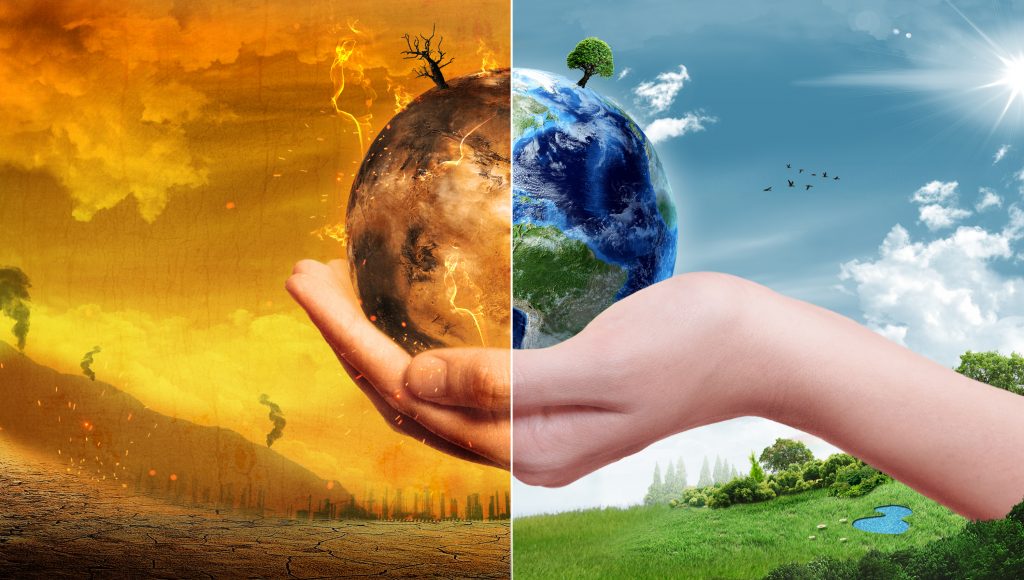 Is the End Nigh?

Is the threat as serious as XR’s ideologists maintain, i.e. that the human species is threatened with ‘extinction’, beginning in ten years’ time?

At the moment average global temperature is about 1 degree above pre-industrial levels and the UN’s ‘worst case scenario’ assumes an increase to 4.5 degrees (that’s if nothing at all is done to decrease emissions) by the end of the century. Such an increase would certainly cause problems, especially under capitalism, with the flooding of low-lying land, mass population movements, and more extreme weather. But it would not mean that six out of every seven humans will perish.

It is possible that XR’s leaders know this and are painting a doomsday scenario to jolt people into taking action. (It is also possible that they have deluded themselves into believing it; Hallam certainly comes across like this). If so, this approach is debateable and is in fact being debated amongst those concerned about climate change, where the point is being made that such alarmist scenarios risk encouraging inaction and an attitude that the situation is so unavoidable that it is not worth trying to do anything about it or, if it does jolt people into action, it might not be what XR wants; it might be support for some eco–fascist dictatorship.

Whatever they might believe is likely to happen, XR’s leaders obviously feel that they should offer some hope. Hence their reformist demand that the government adopt the aim of achieving net zero carbon emissions by 2025 instead of the announced 2050. Although this does seem to offer hope amongst their doom and gloom, it doesn’t really as it’s not realisable (not even if socialism were to be established tomorrow). In his interview with Hallam, Sackur made the following (valid) point that ‘it’s not possible within the framework of our capitalist economy without causing unimaginable damage to people’s lives.’ To which Hallam replied:

‘Well, the damage is imaginable and it’s proportionate and it’s necessary because the alternative is social collapse’.

So, even if the government did adopt XR’s policy, there would still be ‘necessary’ damage to people’s lives. Whatever we do, we are doomed to suffer one way or the other.

There is a way out

Climate change, as a result of global warming caused by human activity over the past two hundred years and still continuing, is a problem and something needs to be done to deal with it, but XR’s strategy for doing so is seriously flawed. Capitalism, with its built-in economic imperatives to endless growth (capital accumulation) and to produce as cheaply as possible (to remain competitive in the race for profits) is indeed both the cause of the problem and an obstacle to its solution and needs to go. But what to put in its place?

Socialists contend that the only framework within which the problem of global warming can be tackled is the common ownership (no ownership) and democratic control of the Earth’s natural and industrial resources as this will put humans in control of what is produced, how, and for what purpose and stop the operation of the coercive economic laws of capitalism. However, this can only be established by the consciously socialist action of a majority of the world’s population, which must include those in the developed capitalist parts of the world even if those from the rest of the world take the lead. It is not something that can be provoked by any minority, let alone a small minority of 3.5 percent.