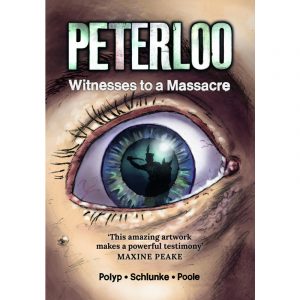 On 16 August 1819, around 60,000 workers gathered in St Peter’s Fields in Manchester to demand an extension of the franchise. They came, men, women and children, from all over Manchester and surrounding areas. Many joined up in contingents of local people who then marched together several miles to the centre of the city. Part of a much wider reform movement, they had come to hear ‘Orator’ Henry Hunt give a speech, but primarily to support a wider franchise and to have an enjoyable day out with their friends and neighbours.

The ruling class, who resisted any reforms, had of course made preparations for the meeting. The local yeomanry, a private militia of the wealthy, were there, also the 15th Hussars. Under instructions from the magistrates, the police attempted to arrest Hunt, but when they were unsuccessful, the mounted yeomanry were sent to help. Not properly trained, in many cases drunk, and with freshly-sharpened sabres, they rode into the crowd, attacking people at will. The Hussars then arrived, in some cases restraining the yeomanry but in others adding to the confusion and crushing. At least fifteen people were killed, perhaps eighteen, and over seven hundred injured. The authorities arrested many of the organisers, including Hunt, who was sentenced to sixteen months in prison.

This book, with illustrations by Polyp, was edited by Schlunke on the basis of evidence and information assembled by Poole. There are some narrative captions by the authors, but the majority of the text is taken verbatim from reports by direct witnesses, whether reformers, journalists or establishment figures. This lends the story a vividness that is added to by the graphics; not everyone likes graphic novels or histories, but here the format does provide an impression of a continuing series of events that brings home to the reader the violence and desperation of the day. A major of the Hussars is quoted as saying, ‘I was very much amused to see the way in which the volunteer cavalry knocked the people about’, while a reporter stated, ‘There were individuals in the yeomanry whose political rancour approached absolute insanity.’ Shortly before he died as a result of being beaten, one ex-soldier said, ‘At Waterloo there was man to man, but at Manchester it was downright murder.’

The authorities reacted not just by prison sentences but also by terming the events a ‘riot’ and blaming the crowd for what happened, as they had supposedly attacked the yeomanry. Yet journalists such as John Tyas of The Times, who was no supporter of reform, agreed that no stones or whatever were thrown at the yeomanry, so there was no justification or provocation for their violence. The Six Acts passed later in 1819 were intended to clamp down on further mass protest. The propaganda war continues today, such as in arguments that not enough people were killed for it to really constitute a massacre. An appalling article by Dominic Sandbrook (Mail Online 24 August 2018) played down Peterloo’s significance and claimed that, compared to the violence of the French Revolution, it ‘was not even a sideshow’. Moreover, it was ‘almost certainly an accident’. But, while it is arguable to what extent there was an advance government plan to attack the demonstrators, the events of 16 August have to be seen in the context of both previous and subsequent state repression aimed at keeping workers in their place.

The bicentenary of Peterloo is being marked by a number of events and exhibitions in Manchester (see peterloo1819.co.uk). This book provides an excellent account of what happened and why it remains important. 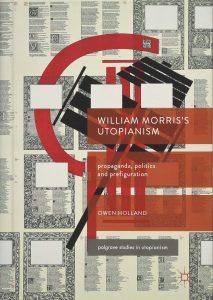 to set up small-scale intentional communities run on cooperative or communistic lines. This is what Marx and Engels had called in 1848 in the Communist Manifesto ‘duodecimo editions of the New Jerusalem’, as advocated – and to a certain extent practised – by Charles Fourier, Etienne Cabet, Robert Owen and their followers. Morris was a utopian only in the sense of being the author of a utopian novel about a future communist (or socialist, the same thing) society and how it came about. Even in News from Nowhere, there is a criticism of ‘utopian socialism’ as when Old Hammond says of Fourier’s ‘phalansteries’ that they were a ‘refuge from destitution and little more.’

In his purely political writings Morris was even more critical, accusing those who set them up of opting out of the struggle to establish socialism on a society-wide basis. Holland quotes from a book review Morris wrote in Justice (10 July 1886), the journal of the Social Democratic Federation, that ‘although these communities were experiments in association, from one point of view they were anti-Socialistic, as they withdrew themselves from general society—from political society—and let it take care of itself.’ Holland goes to quote from a lecture Morris gave in 1894 entitled Why I am a Communist in which he said that ‘such experiments are of their nature non-progressive; at their best they are but another form of the Mediæval monastery, withdrawals from the Society of the day, really implying hopelessness of a general change.’

What Morris favoured was socialists staying in capitalist society and propagating the need for revolutionary action to change the basis of society to the common ownership and democratic control of the means of life, the same criticism that Marx and Engels had made of those they encountered in the 1840s who argued for setting up intentional communistic communities.

In the book as a whole, Holland places Morris’s ideas in the context of late Victorian society, as in his examination of Morris’s views on the ‘women’s rights’ movement of the time and the peoples of the ‘backward countries.’

As a socialist Morris was of course opposed to all oppression of women, but he seems to have thought that women were better, if not naturally, suited to doing certain kinds of work (such as serving food, as in News from Nowhere) and unsuited for others (such as working down coal mines or at night). Not that the feminists of the time (now known as First Wave Feminism) campaigned for the ‘right’ of women to work at night or down the mines. They were more concerned about their property not passing to their husband if they got married. Many, Holland notes, saw the way forward for women in terms of individual personal development rather than a change in the basis of society.

Alright up to a point 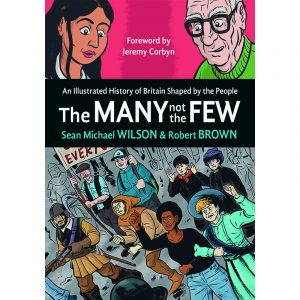 The Many Not the Few. An Illustrated History of Britain Shaped by the People. By Sean Michael Wilson and Robert Brown. Workable Books. 2019. £9.99.

This is a primer, in the cartoon form of conversations between a retired trade unionist and his granddaughter, of working class, or rather lower class (since it starts with the Peasants’ Revolt), history, aimed at those new to trade unionism and ‘labour’ politics. Wat Tyler, the Levellers, the Diggers, Peterloo, the Chartists, the match girls’ strike, they are all there. When, however, it comes to the twentieth century and the formation of the Labour Party it becomes tendentious; which no doubt explains why it comes with a preface and recommendation from Jeremy Corbyn.

However, Corbyn might be embarrassed (or maybe not) by the anti-EU and pro-Brexit stance taken at the end. This, no doubt, is due to the ‘history adviser’ being Doug Nicholls, a frequent contributor to the Morning Star and first chair of Trade Unionists Against the European Union. There is a mysterious reference to a ‘Worker’s Liberty’ website on page 109, odd because if that’s to the trotskyoid AWL they are anti-Brexit. In any event, dragging in Brexit will date the book and, besides, has nothing to do with working class history.