50 Years Ago: The Moon and Progress

The Moon and Progress

Perhaps it would be better if, after all, we left the moon alone. It is lovely to look at and does nobody any harm, and in any case there are plenty of problems to be tackled here on earth, before we start spreading out into space. Yet even the most fervent Luddite, the most obstinate flat-earther, must feel a chill of excitement at the thought of men out in black space, circling the moon, observing it, stepping out onto its surface.

There is near-unanimity of opinion that space flights, moon landings, and the rest are a ‘good thing’ and anyone who has doubts on the matter is immediately classified as a neurotic, reactionary crank. It is true that space vehicles can make a valuable contribution to weather forecasting, communications, and geology, if only because of their unique position for observation. Another result of that unique position is, of course, that space vehicles have distinct, and frightening, military uses — for both observation and combat. It is no coincidence that the world’s two space powers are also the world’s two greatest nuclear powers and that the other positions in the league table of space achievements roughly correspond to the positions in the nuclear power league table. 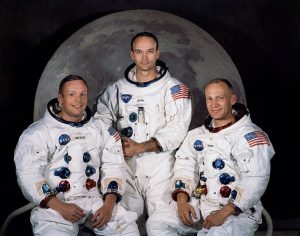 It might seem churlish to point this out, in face of the glamour of the moon shots. But is it so bad, to try to keep calm amid the hysteria and to wonder whether all technological advance is useful, why some of it happens, whether society has its priorities in order, and whether we should all fall flat on our faces in worship of the great god Progress which is supposed to feed and succour us, which we are supposed to rely on and to be unable to deny?