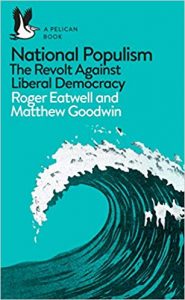 ‘National populism,’ the authors tell us, ‘is an ideology which prioritizes the culture and interests of the nation, and which promises to give voice to a people who feel that they have been neglected, even held in contempt, by distant and often corrupt elites.’ The word ‘national’ is added to distinguish it from left-wing populism, as seen in Podemos in Spain and Bernie Sanders in the US. (For a socialist take on populism, see the March 2018 Socialist Standard.)

The book is, however, not mainly concerned with the views of populist politicians, and certainly not with how they fare when in government. Rather, it emphasises the characteristics and opinions of those who support them. The authors have little difficulty in showing that national populism is not backed solely by the poor and the unemployed, or by angry old white men. Many people under forty support populists, but one significant point is that people without university degrees are more likely to vote for populist candidates (Trump, for instance).

The reasons why increasing numbers side with national populist candidates are said to include distrust of politicians and other elites (who are rich and had expensive educations) and the weakening of links to mainstream parties, which also lies behind the growth of the Greens and parties like the SNP. The increase in inequality over recent decades is also seen as a major factor, with a feeling of relative deprivation giving rise to political action.

But what marks national populism out from the less successful left-wing populism is its attitude to immigration and what Eatwell and Goodwin call ‘hyper ethnic change’. This is where national populists really tap into many people’s concerns that their way of life is undermined by large-scale immigration, especially of Muslims. And here the book becomes rather unpleasant: racism is defined in narrow terms (so discrimination is not in itself racist), and is contrasted with xenophobia, ‘a distrust and rejection of that which is perceived to be foreign and threatening’. Blatant racism is said to be less successful than appeals to culture and values, yet national populists accept ‘the critical importance of ethnic ancestry’ and want to ‘stem the dwindling size of their group [and] advance its interests’. This is just a euphemism for white people wanting to discriminate against non-whites, or general discrimination against those from abroad.

The authors accept that national populism has a dark side, on which they say very little, but also maintain that it raises ‘uncomfortable but legitimate issues’. However, they do not clarify who counts as a national populist, and, for instance, say little about Latin American populists. Many writers would regard Recep Erdoğan in Turkey as a populist politician, but here he is seen as part of a Muslim plot, arguing that Turkish families in Europe should have lots of children. His repressive rule can therefore be overlooked, as is that of the uncontroversially populist Viktor Orbán in Hungary, where a law was recently passed increasing the amount of overtime that employers can demand from workers.

Above all the book provides no evidence whatever that populist leaders can in any way deliver on their promises. They have allegedly ‘set out an alternative to the status quo’, by which is meant higher pay and more infrastructure projects. This is no alternative at all, for populism, national or otherwise, accepts the existence of capitalism and its elite – the capitalist class – and combines this with intolerant and authoritarian policies.