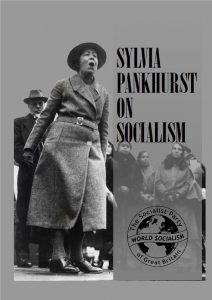 ‘Full and complete Socialism entails the total abolition of money, buying and selling, and the wages system.’ So wrote Sylvia Pankhurst in a 1923 article ‘The Future Society’ reproduced in this pamphlet, an article which makes it clear that she viewed socialism in essentially the same way that the Socialist Party does.

Socialism and communism are the same, she says, and involve common ownership of the means of production, with production for use. Capitalism, in contrast, involves many people engaging in unproductive work such as banking. It also entails such institutions as pensions and the Poor Law, and the wages system makes the worker’s life precarious and leads to unemployment. She in effect opposed reforming capitalism, though she discussed this in a rather confusing way as setting up a half-way house to socialism.

In ‘Socialism’, another article from the same year, also reproduced here, Pankhurst emphasised the idea of abundance, and stated that the aim was not to put new rulers in place of the present ones. Capitalism limits production: for instance, agricultural land is turned into deer forests or private parks, and much land is left vacant. Production is further limited because only a certain amount can be sold at a profit. Workers who could be productive are unemployed, and factories are idle. In socialism, in contrast, the land and other means of production will belong to all the people. Production will be for use, and every effort will be put to supply essentials such as food, clothing and housing. What is produced will be freely available, with no money or exchange.

The pamphlet also contains a review, reprinted from the Socialist Standard (November 1999), of Mary Davis’s book Sylvia Pankhurst: A Life in Radical Politics. The review contrasts Sylvia’s position with that of the ‘official’ suffragettes led by her mother Emmeline (wrongly referred to as ‘Emily’), who advocated votes only for wealthy women. Sylvia supported universal suffrage and then, unlike her mother, opposed the First World War and was for a short while a member of the ‘Communist’ Party. She later abandoned radical causes and supported Ethiopia against fascist Italy.

The pamphlet’s introductory essay traces her political trajectory in a little more detail, including her work in the East End of London, her publication of the Workers’ Dreadnought and the various organisations she belonged to. The Bolshevik revolution in Russia led her to support soviets rather than the use of parliament and to oppose the CPGB affiliating to the Labour Party. For this she was fiercely criticised by Lenin, and she was expelled from the CP in 1921. She then went on to view Russia as capitalist rather than socialist, and in 1924 described Russian workers as wage slaves.

Sylvia Pankhurst ought to be recalled, not as someone who played a subsidiary but significant role in the suffrage movement or was an object of Lenin’s criticism, but as someone who saw through the propaganda of capitalist politicians and the Bolsheviks, and – for a few years at least – stood for the abolition of the wages system. This pamphlet should help to ensure that this aspect of her politics is not forgotten.