Reviews: ‘Big Capital – Who Is London For?’ & ‘Why Socialists Oppose Zionism and Anti-Semitism’ 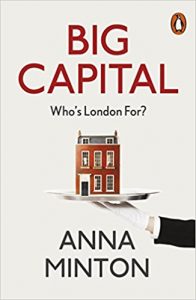 Though written before Grenfell, this is a devastating analysis of the housing situation in London, with implications for other places too. Housing, Minton says, is a safety deposit box and a cash cow, with the rate of return on land and property far exceeding economic growth, let alone rises in wages.

At one end of the market are the super-luxury flats owned by Russian billionaires and Chinese investors, the transnational elites who are described as Ultra High Net Worth Individuals. At the other end are the ‘beds in sheds’, unauthorised dwellings in back gardens, and rented bed spaces, where someone may sleep in a bunk, with four people sharing the front room of a terraced house. There are also the ‘hidden homeless’, some of whom actually sleep on buses.

Most people, of course, are in between these extremes, either renting or owning and often suffering from the inflated cost of housing. One example given is of a woman who earns nearly £40,000 a year; her partner also works full-time and they have two children, a boy and a girl, but live in a two-bedroom flat. It is better than their previous place because the heating works. She describes her life as ‘middle class poverty’. Many people could afford a mortgage but, because of the high level of rents, cannot save enough for a deposit to buy their own place.

The pressure on housing in London means that many homeless families are rehoused outside the capital. One recent report (Observer 2 September) noted that people who buy houses in Bath to avoid the costs of London are pushing up rents and house prices for locals. Thus developments in London have impacts on other towns and cities too. Forcing those on lower wages into the outer areas of London may give rise to something along the lines of the banlieues in Paris.

Minton traces various reasons behind this appalling situation. The virtual abandonment of new-build council or social housing means a drastic reduction in the availability of lower-priced homes, while the ‘affordable housing’ required in new developments is in reality affordable for very few. Thatcher’s ‘Right to Buy’ policy increased the number of homeowners, but in fact they were leaseholders rather than freeholders and so vulnerable to compulsory purchase schemes. People bought out in this way are rarely given the real market value of their home and so have to move further out, away from friends and family.

There are many other factors involved, including the system of housing benefit, but the basic cause is that under capitalism housing is part of the market system and exists to provide profits for the few rather than decent homes for the many. What may help to bring the whole edifice to an end is the fact that companies are becoming increasingly worried that most of their workers will simply not be able to afford to live in London, and the Fifty Thousand Homes campaign is designed to address this. When business groups state that ‘The pricing out of young talent and the London workers who keep our city moving hurts all levels of society, and threatens London’s status as a beacon for creativity and enterprise’ (londonfirst.co.uk), it is clear that the housing problem affects capitalists as well as workers, though in different ways. 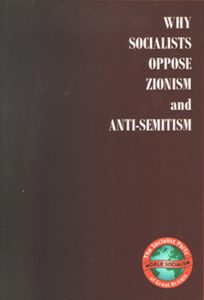 It is common for people and organisations on the left of capitalist politics to express opposition to Jewish nationalism (i.e. Zionism) and support for Arab nationalism (i.e. Palestinian ‘self-determination’). The justification given for this is that the Zionists stole the Palestinians’ homeland, called it Israel and now oppress and intimidate them in their efforts to return to it or to achieve some kind of political status in the region. Others, conversely, support Zionism and the Jewish state and oppose the aspirations of the Palestinians on the grounds that Israel is a bulwark against forces that are opposed to Western values.

The position taken by the Socialist Party in its new pamphlet, ‘Why Socialists Oppose Zionism and Anti-Semitism’, is different from both of these. It is a position of opposition to all nationalism, whatever form it takes, which is summed up clearly in the pamphlet’s introduction:

‘Nations are not natural divisions of humanity: they are political constructs, “imagined nations” …..The notion that there are collectivities called nations with rights is a product of the capitalist era of human history. States – coercive institutions ruling over a given territory – existed before capitalism, but, once control over them had passed to the capitalist class and its representatives, the new rulers sought to legitimise their rule as that of representatives of “the nation”. Nearly everywhere those who ruled were not homogeneous in terms of languages or religion. They had to be moulded into a “nation” by having it drummed into them that they had a common history, interest and identity. As most states are of relatively recent origin, such “nation-building” is still going on today in many parts of the world.’

But even those sympathetic to this position may think that it applies less readily to Israel given the ‘extra’ ingredient in the mix – that of the centuries-long persecutions of Jews by those professing other religions, most notably Christianity, and hence the need for Jewish people to have a home of their own, a place to live in peace and without fear of anti-semitic persecution. This pamphlet chronicles the history, recent and otherwise, of this aspiration for a Jewish ‘homeland’ by reproducing a series of articles published on the subject in the Socialist Standard over the last hundred years. In recent times it is a history of the large capitalist powers pursuing their economic and strategic interests in the region and jumping from the Jewish to the Arab side and back again according to prevailing circumstances. The so-called Balfour Declaration of 1917 by the British government guaranteed the Jews a national home in Palestine but, when, after World War 2, this turned into the demand for an independent state, the British, initially at least, resisted this with force. But partition of Palestinian territory was finally accepted by the Western capitalist powers (and initially by Russia too), resulting in an ongoing conflict between Arabs and Jews that has lasted to this day. The words of the 1937 article reprinted in this pamphlet (‘Divide and Rule in Palestine’) have proved prescient: ‘This will give Arab and Jew (like the North and South of Ireland) something to quarrel over for years to come, to the hindrance of propaganda for working-class solidarity against the international capitalist class.’

As for a new era for Jews where they could live in peace and free from anti-semitism, this has clearly not happened as witnessed by the various wars which have taken place between Israel and neighbouring Arab states since the Jewish state was created and the perpetual tension caused by attacks on its territory and also by Israel becoming an object of hatred in the Arab world. Many Jews fled from anti-semitism in Europe but in so doing only succeeded in generating another anti-semitism in the Middle East.

The setting up of the new Jewish state in Palestine commanded a great deal of misplaced devotion, especially among the world’s Jewish population, with opposition to Israel or support for the displaced Arabs being seen as a form of anti-semitism itself. However the principled and consistent opposition of the Socialist Party to the nationalism inherent in the setting up and running of any new capitalist state, whether Jewish or otherwise, marks us off from everyone else on the political spectrum and makes it clear that our opposition to Zionism has absolutely nothing to do with anti-semitism. Evidence that we are entirely ‘even-handed’ in judging both Israeli nationalism (Zionism) and Arab nationalism is provided by the October 1993 article reproduced in this pamphlet (‘Peace in Palestine’):

‘Our opposition to Zionism does not mean that we support the Palestinian Liberation Organisation. Unlike some, we don’t single out Jewish nationalism for special condemnation. We condemn all nationalisms equally. The “Palestinian nation” is just as much a myth as the “Jewish nation”, or any other nation. Nationalism is the ideology which seeks to justify the capitalist division of the world into separate “nation-states”, each competing to gain a place in the sun for its ruling class and each with killing machines at its disposal. We utterly reject this view of the way humanity should organise itself.’

Since nationalist movements the world over always turn out to be movements in favour of local capitalists wanting their own state in order to be able to pursue and defend their economic interests, it follows that any talk of ‘self-determination’ for a group of people inevitably results not in some kind of ‘liberation’ but in a change of masters. Given this context can it truly be said that Jewish wage and salary workers in Israel are in a fundamentally different position from Jewish wage and salary workers in other countries? The closing words of the introduction to the pamphlet make the socialist position absolutely clear: ‘Socialist opposition to Zionism is not anti-semitic; it is opposition not just to Zionism but is based on opposition to all nationalism and all nationalist movements.’ It flows from this that we resolutely oppose the conventional left-right politics of capitalism in which people support and encourage others to support one form of nationalism against another form of nationalism.