When people ask questions that begin ‘What would socialism do about…?’ we have to be careful how to answer because a) it would be presumptuous of us to make tomorrow’s decisions today on behalf of everyone, b) prevailing circumstances and technology may change unpredictably and c), as a Party wag once put it, socialists don’t have crystal balls.

But you don’t need technical knowledge, or crystal balls, to realise what socialism would most likely do in many cases. Sometimes common sense is enough. But capitalism is far too perverse to be so amenable, as two recent news items illustrate.

The first item is the story that Japan is trying to get its supporters on the International Whaling Commission (mostly small countries with juicy Japanese aid programmes) to vote to lift the long-standing global embargo (‘Japan says it’s time to allow sustainable whaling’, BBC Online, 7 September). The whaling question is bizarre from almost every angle. Japan argues that now that the minke whale population has returned to sustainable levels, the embargo makes no sense. But Japan has famously been hunting minke whales in defiance of the embargo ever since it was established in 1986, with the risible pretence of ‘scientific research’. This oddity seems to be what has drawn so much media attention onto Japan, while to virtual media indifference and without any such ‘scientific’ pretence, Norway and Iceland together hunt even more whales per year than Japan, including the endangered fin whale. Their reason? The IWC embargo was only ever voluntary and so they have both opted to ignore it. One wonders why the Japanese don’t simply do the same.

After all, they would have a point. The IWC was deliberately crowded out by non-whaling countries (over 70) to permanently out-vote the whalers, so the debate was harpooned from the start. The Japanese are also surely correct in pointing out that most opposing countries support large-scale meat farming, often in cramped and inhumane conditions, and are thus being completely hypocritical. Certainly whales are intelligent animals, but then so are pigs. Moreover it’s a strange kind of moral argument to say that we shouldn’t kill things because they are intelligent, when capitalism regularly kills intelligent humans by the tens of millions, by neglect if not active warfare.

But what’s really odd about the whaling industry is that it doesn’t even make money. Whaling in all three countries is heavily subsidised by their governments. Though populations have been gulled into supporting whaling as a mark of nationalist pride, hardly any of them eat whale meat. In Iceland, whale watching is a far more lucrative industry and almost the only people who eat the meat are tourists who think of it as a cultural box to tick (‘Icelanders Don’t Like Whale Meat—So Why the Hunts?’news.nationalgeographic.com, 27 January 2016).

In Norway fewer than 5 percent eat whale steak (Wikipedia). The rest is sold for dog food or shipped to Japan. Even in Japan there is hardly any taste for it, and the market is on the point of collapse. The reason in all cases is the same: whale meat just doesn’t taste very good. Despite its claims to centuries of tradition, Japan only started large-scale whaling after World War 2 when it was unable to afford lamb and beef imports.

Norway’s only remaining whaling company actively propagandises the industry by visiting schools and sponsoring apprenticeship schemes. Iceland echoes a Life of Brian parody by demanding the right to eat whale as a symbol of national independence even though none of them do, while Japanese ‘scientific’ whale meat usually ends up in restaurants served to tourists. 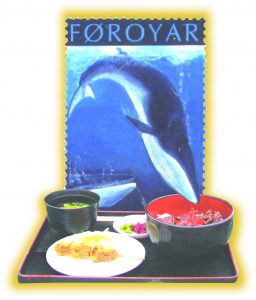 Meanwhile government subsidies keep the leaky ship afloat. The more you look at the industry, the madder it gets, and it serves as an example to anyone tempted to argue that capitalism’s market system is always supremely logical and economically rational. It sometimes isn’t, even in its own terms.

To answer the question ‘Would there be whaling in socialism?’ you only have to ask yourself if you would be prepared to go out on a factory ship and kill whales with grenade harpoons for the sake of something that nobody wants to eat in the first place.

The Green And Pleasant Sahara

The other story is more encouraging, with the suggestion by researchers that planting up to 9m square kilometres of solar panels and wind turbines across the Sahara desert would have the effect of greening it (‘Large-scale wind and solar power ‘could green the Sahara’’, BBC Online, 7 September). It turns out that both solar and wind collection systems have the by-product of increasing local precipitation, quite apart from the energy they produce. The effect on local people could hardly be more positive, in turning arid desert into a Garden of Eden, so unless further climate modelling produces the unhappy report that more rain on terrain A means less rain on terrain B and that such a project would wreck the global climate even more than it’s currently being wrecked, there appears to be no down side. It’s estimated that such a project could generate up to four times the entire world’s annual energy consumption. In a socialist society looking for safe and sustainable ways to produce abundant energy, this could well be the decisive factor in proceeding with such a scheme in all haste.

But in capitalism there is the unpredictable market to take into account. What rich country or corporation is going to front up the money for this, and toward what perceived profit? Local people in the Sahara may well benefit but as they are among the poorest people on Earth they don’t count, economically speaking. What does count is the sale of the energy to other countries, but energy prices can be severely affected by many factors, especially oversupply. Investors are not likely to invest in any system that supplies energy over and above projected demand, because this will lead to lower prices and a loss of profit. So, good as the idea looks, if the numbers don’t add up capitalism won’t build it.

Or maybe they will, if they apply the farcical logic of the whaling industry. No wonder socialists think capitalism is bonkers.