Dialectic of Power: Leaders and the Led 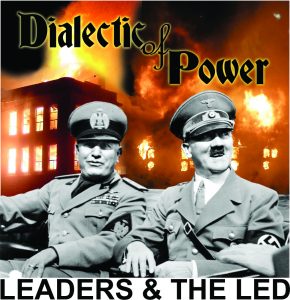 We have seen it all before but once again heads of state have been indulging in verbal international belligerence. Whether it is a matter of trade, borders or resources such leaders feel it is both their role and duty to be seen to protect the ‘national interest’.

Most commentators for the media and their readers take it for granted that this represents, to various degrees, the exercise of the leader’s power. But can a single individual possess political power and if they can what is its nature and origin?

The myth of the ‘strong man’ and the invincible leader is an essential component of bourgeois ideology since any authoritarian system must have a summit to its pyramid of power. But like every other component of reactionary political theory this too might turn out to be just another myth. Could it be that this illusion of power is testament to the power of illusion?

Political power itself is no illusion. The state is the incarnation of social power and exists in part to restrict access to the fruits of production by the producers (the working class of wage and salary earners). The tiny parasitical minority knows that it is only through violence and the threat of violence that they can maintain ownership of the means of production.

And here we have the origin of all social power: the relationship of an individual and his class to the production of the means of life. No individual or group can force anyone to do anything without the threat of the removal of access to the means of living (sometimes absolute or, more often, various degrees of imposed poverty). Authority is given to those who have undertaken to protect the wealth and power of the minority ruling class. Those who are seen to be successful in doing this acquire access to a higher rank which can potentially lead to the ‘presidency’ itself.

Of course those with ‘connections’have a head start on all of the others but even these privileged individuals will get nowhere if they are not seen to do their job with the ruthlessness, duplicity and immorality needed to justify oppression, exploitation and greed. Given the nature of such success and the character and skill set it requires it is not surprising that it is the insecure, sociopathic and narcissistic who are most likely to succeed. Paradoxically it is quite possible, within this cultural context, for the weakest (in terms of moral integrity and intellectual insight) to access the highest office. The weak are attracted to power and power seeks out the weak. Given this perspective can we say that those thought of as having the most power are, in fact, among the weakest within the community?

Not so great men

Biographers spend their time seeking out the ‘essence’of a personality –what is it that sets the famous (or infamous) apart from the rest of us? Biographies of leaders focus on this element within the subject’s character and come up with titles like: The Dark Charisma of Adolf Hitler or God’s Englishman (Oliver Cromwell) etc.

Many of these individuals are driven personalities who seem to be desperate to prove something about themselves to others. Ironically one definition of strength is the relative absence of this egotistical obsession. But before we get too taken up with the popular hobby of pseudo-psychology what is usually overlooked in such biographies is that when a society believes in the myth of leadership it creates leaders.

It is the office and not the individual (who emerges, invariably, as a great disappointment in terms of character analysis) that needs to be analysed if we seek the origin of perceived power.

The myth of a dominion that flows downwards from some ultimate authority is still very prevalent. In fact it is quite the opposite: ruling classes rule through the illusion of individual leadership which is ultimately dependent on the political manipulation of the masses. This is made possible by the stability, or otherwise, of political institutions.

When such historical stability is absent a ruling class may lose control of the individuals it has promoted to look after its interests. Such an occasion was the weakness of the Weimar Republic in Germany in the 1930s that allowed the rise of the Nazis and Hitler.

Capitalism’s failures had led to the political disillusion of millions at that time in Europe and many supported leaders who made promises to radically change things; and the true litmus of any attribution of power is this ability to bring about change. With the whole power of the state concentrated in his hands did Hitler bring about any profound and lasting change?

For those who lived and died through the Second World War Hitler’s decisions obviously had a great impact but the ‘Thousand Year Reich’was quickly seen as the delusionary mirage of a madman. Fascism is the most unstable form of government and depends on continued military success. Hitler’s power was dependent on the maintenance of an illusion and illusions cannot survive the realities of the momentum of history.

Millions believed in him but he was still just a troubled insecure little man who understood nothing of historical reality and believed in the myths of racism and German legend. Change happens as a result of a confluence of elements: development of productive technology, failure of old relations of production and the subsequent ideological doubt and theoretical innovation.

Cromwell, Napoleon, Lenin and Hitler rode on the coat-tails of change and were not instigators of it. Without the ability to instigate change individual power is seen for what it really is –merely a licence to bully; and that is always an indicator of weakness and never of strength.

If we turn to the reasons why the majority still believe in this myth of individual political power we, as ever, have to look deeply into our own motivations, needs and paradigms. Quite often when discussing socialism someone will accept our case but will then confidently declare that most everyone else would not have the intelligence or education to believe in it.

This ‘projection’ onto others of political ignorance is usually an indication of the intellectual insecurity of the speaker. We live in a world of ‘specialisms’ where the division of intellectual labour is exclusive and rarely inclusive.

As children we turned to our parents to explain the world and in later life we turn to our doctor, accountant, priest, therapist, lawyer, mechanic or IT expert. The different talents of individuals and our social interdependence make this a rational procedure but, in the end, it is you who have to make the decisions and in the full knowledge that experts can be, and often are, mistaken.

The great problem with representative (bourgeois) democracy is that your right to make decisions concerning your life is given to another for five years and, as we’ve seen, those decisions are made not in your interest but in the interest of the ruling class. We are told that somehow these representatives are more knowledgeable or somehow more talented at knowing what’s good for you than you are. In effect they are claiming to be your parents and in this way the system infantilises the electorate. Another myth lurks here: that of ‘privileged’information.

Many believe that once the ‘corridors of power’have been accessed then, depending on the individual’s level of security, the secrets exposed provide a privileged insight into ‘what’s really happening in the world’. This is at the heart of the reason for the proliferation of conspiracy theories.

It is somehow more comforting to believe that a Machiavellian conspiracy is responsible for the anarchy, suffering and immorality of capitalism rather than the impersonal and innate amoral character of the system itself. Although the secrecy of any political establishment has something to do with disguising corruption and lies it has everything to do with preserving the myth of political competence.

The reality of stupidity and ignorance would immediately reveal the almost complete absence of the ability to change or direct capitalism in any major respect; the ‘corridors of power’ would be seen as all ‘smoke and mirrors’. Parliaments the world over are merely the façades of the illusion of control; they provide a political diversion masquerading as democratic power while the ruling class and their functionaries get on with their real business of exploiting everyone and everything for profit.