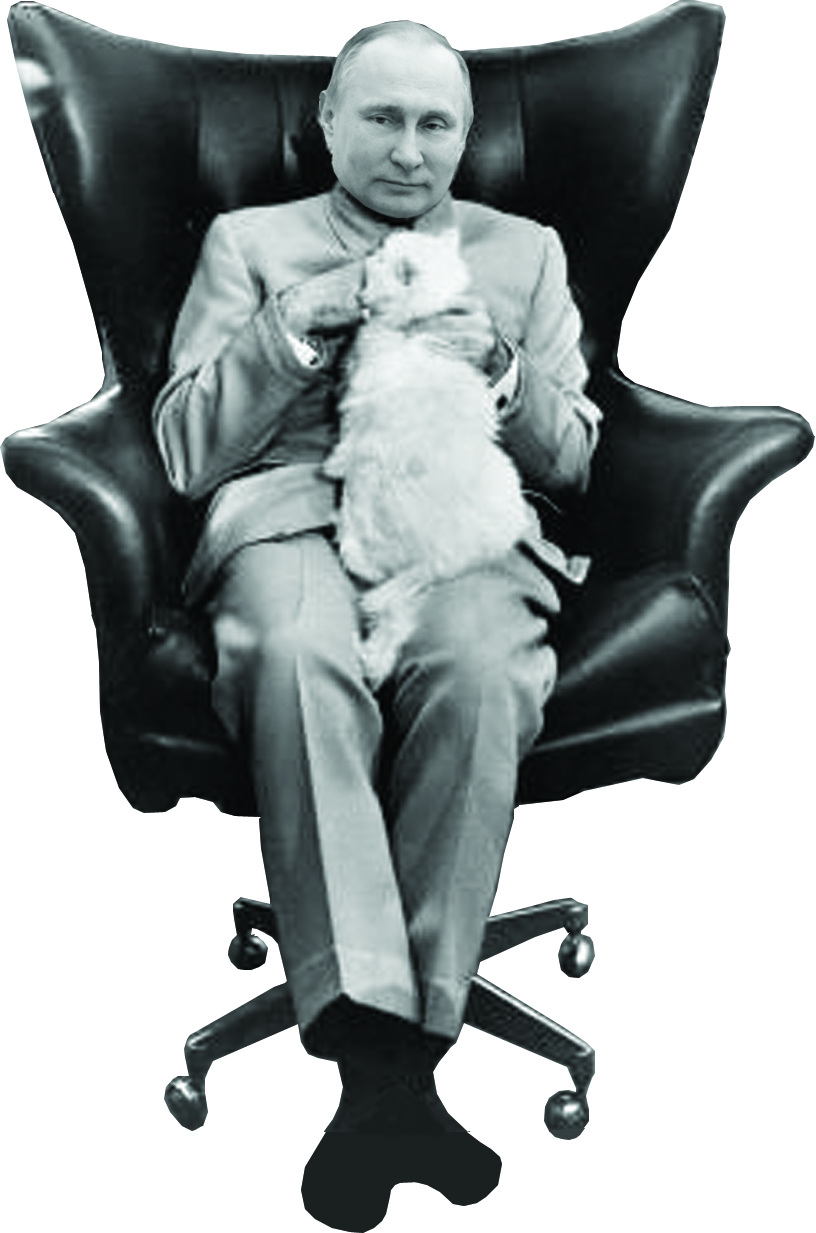 Political theatre turned to Hollywood farce last month as PM Theresa “Mousey” May squared off against Vlad ‘The Impaler’ Putin over the Novichok poisonings in Salisbury. Called upon by the media to flex her non-existent muscles over Russia’s blatant attempts to murder one of the entries on its oversees shit-list, she immediately pressed the Maximum Response button by expelling a few token diplomats. Putin predictably expelled the same number of Brit Dips in retaliation, leaving the two leaders looking like kindergarten kids having a spat. Such was the damage to the Russian pin-up’s political reputation that he went straight on to win a fourth term as president by a landslide, helped no doubt by the fact that he’d banned his chief rival from contesting. May’s international standing didn’t suffer either, as it was already non-existent.

Russia’s overseas assassination programme has used increasingly baroque methods to supposedly hide its state involvement over the years, in marked contrast to its prosaic internal policy of shooting regime critics in the head in lifts (Anna Politkovskaya, 2006) or in drive-bys (former deputy prime minister Nemtsov, 2015). From ricin in the 1978 Markov hit they progressed to sarin for the 2002 take-down of Chechen leader Khattab, then a failed 2004 dioxin attack on pro-western Ukrainian lead Yushchenko, to polonium in the 2006 Litvinenko murder. Mercury was implicated in an attack on human rights lawyer Karinna Moskalenko in 2008, while in 2012 exiled Russian businessman and police informant Alexander Perepilichny dropped dead in London with a dose of the rare toxic flower gelsemium.2013 must have been an off-year, as Putin-critic Boris Berezovsky was found merely hanged in Berkshire.

So no big surprise that they’re at it again, but using a nerve agent invented and produced only in Russia seems like a downright giveaway, notwithstanding the Russian ambassador’s chutzpah in accusing the UK of trying to bump off its own spy by pointing out that ‘Porton Down is only 8 miles down the road’ from the crime scene. For once Boris ‘Ballsack’ Johnson seemed to have the measure of the situation: ‘The obvious Russian-ness of the weapon was designed to send a signal to anyone pondering dissent amid the intensifying repression of Mr Putin’s Russia. The message is clear: we will hunt you down, we will find you and we will kill you – and though we will scornfully deny our guilt, the world will know that Russia did it.’

The world seems increasingly controlled by cartoon Bond villains, as witness the toxic poisoning of already-unhealthy democratic systems by the manipulation and exploitation of big data to influence and perhaps swing popular votes. In the frame lately has been the British firm Cambridge Analytica, implicated in the shock Trump and Brexit votes. Perhaps more credence has been put on behind-the-scenes skulduggery because both these votes returned shock and unexpected results, but even so there’s little doubt that skulduggery is at work, and not just by Cambridge Analytica. Unless you live completely off-grid with no computer, phone or any other digital device, deal only in cash and wear a facemask when you go out, the capitalist data machine is constantly hoovering up information about you which private firms can then use to target you with profiled advertising or political messaging. Such brainwashing, as it’s also known, is likely most effective with right-wing voters and others whose brains probably don’t require that much detergent, however it’s an alarming sign for state regimes when the power of manipulation they used to call their own can now be hired out to the highest bidder. In an astounding display of vapid bravado the UK Information Commissioner Elizabeth Denham demonstrated her complete failure to ‘get it’ by announcing to Channel 4 News she intended to seek a warrant to access Cambridge Analytica’s data files, a statement which has no doubt alerted the company to the need to delete anything incriminating. Or maybe it was a deliberate move to give them the heads-up today, prior to employing them tomorrow for the hapless May’s next desperate electoral attempt to stay in power.

Mysteriously absent from most media reports about the surprise talks mooted between North Korea and the USA is the proposed Sakhalin gas pipeline running from Russia’s gas fields to South Korea and Japan via… North Korea. The pipeline has been on the drawing board for years, but the changing Asian energy market, with coal and nuclear out and gas in, has given the project a new lease of life. Russia is also keen to use South Korea’s shipbuilding capabilities to create a huge commercial fleet that can ship liquefied natural gas (LNG) and exploit the opening Arctic sea lanes. Russia has lately sweetened the deal by cancelling 90 percent of North Korea’s huge Cold War debts. But what’s in all this for Trump? Maybe nothing but face-saving. The US failed despite sanctions to stop Europe from buying Russian gas, so it has little chance of stopping a deal involving Russia, China, Japan and the two Koreas. No daylight between South Korea and the US? Think again!

Thinking Outside the Boss

Prominently displayed on the Letters page of New Scientist recently (3 March) was an epistle, the authorship of which may be divined by regular readers of this column, which challenged the magazine to ask the following question: ‘has the capitalist system finally passed its sell-by date?’ This was in response to the magazine’s somewhat self-righteous justification of its own frequent forays into the world of political commentary, on the grounds that science doesn’t live in a political vacuum. Quite so, the letter pointed out, and politics doesn’t live in a science vacuum either, therefore since the evidence of capitalism’s many iniquities is overwhelming, shouldn’t the search for an evidence-based alternative social model be a legitimate line of scientific enquiry?

Not a bad question, you may agree, but questions of methodology aside, the likely answer running through the minds of any scientist or journalist reading the question will be: ‘Yes, but my boss won’t let me.’ This probably explains the loud silence that has ensued since the letter was published.