For Whom the Carillion Tolls 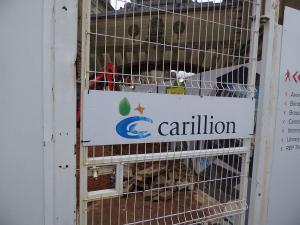 The collapse of Carillion has brought the Private Finance Initiative (PFI) into the headlines once more, much to the delight of the Corbynite crowd in the Labour Party.  PFI was, essentially, outsourcing state facilities and services to the private sector, delivering the same outcomes for the public but under private for-profit management.

For politicians there were advantages: at certain times, under accounting rules, PFI arrangements would not add to state debt, since the private firms would have to borrow to finance the project (build the prison, school, hospital, etc.).  Further, the ongoing liabilities for maintaining the building would fall on the private company, and not add to the government estate.  The wider benefit would be that it would also keep the headcount of state employees down, and create a downward pressure on wages as workers would be divided between firms.

From an ideological point of view, it was about asserting that private sector management techniques are more efficient and capable of delivering services than the public sector, where employers are subject to political pressure as well as market pressure.  Further, from a capitalist point of view, the state is inherently unproductive, even where it provides useful services.  From this perspective, all expenditure by the state is a barrier to the accumulation of capital and the growth of the capitalist economy.

PFI raised the option of making profits out of these services, and adding to the gross profits of the economy.  For New Labour politicians, this raised the fantasy of ending the antagonism between state and private sector, making serving public needs profitable.  That it expanded the options for the soft corruption of what Private Eye calls the ‘Westminster revolving door’ would have helped.

Giving ex-politicians seats on the boards of firms has long been a way of ensuring compliance from MPs and Ministers: it doesn’t need to be a direct quid-pro-quo of corruption proper, but a generalised reward for services to being pro-business.  With outside firms bidding for state contracts, the possibility arose for ex-Ministers to become ‘advisors’ to the firms that had serviced their departments, added to the feather nest.

There have been obvious problems with PFI: unlike directly employed staff, corporate entities work strictly to contract, and there have been a rash of instances where the precise terms of the contract turn out to be poorly drafted, and the firm has refused to take on work or costs that would normally reasonably be associated with the service they are providing.  Schools in Edinburgh basically fell down, as the builders had cut corners in order to boost their profit margins.  PFIs have turned out to be more expensive in many instances than if the government had borrowed the money directly.

The fantasy of reconciliation has hit the rocks in Carillion: not because the firm was incompetent or specifically venal, but, rather, because of the crisis-prone nature of capitalist markets themselves.  Carillion is a construction company that has specialised in winning Government contracts, or buying up firms with Government contracts.

As Jonathon Ford wrote for the Financial Times:

‘Carillion’s balance sheet shows the extent of its dependence on these ethereal assets. At the end of 2016, things that could be sold in a crisis (ie fixed assets and stocks) accounted for just 5 per cent of the total. Its solvency thus depended on the valuation of intangibles accounting for nearly 40 per cent of the balance sheet. Almost all of those were goodwill — acquired with the many companies Carillion acquired over the 18 years of its existence.’

The company existed as something of a phantom based on the income derived from government projects, sub-contracting the actual work of owning machinery and tools to smaller firms.  This was fine, so long as the contracts kept rolling in.  Carillion will have been one of the big losers from the Tory governments’ long-term austerity drive, such as when they cancelled the schools building programme.  As the blogger Michael Roberts notes:

‘it seems that it had taken on too many projects from the UK public sector at prices that delivered very narrow margins.  So, as debt issuance rose and profitability disappeared, cash began to haemorrhage.  Carillion ran up a huge debt pile of £900m.  But this did not stop the Carillion board lying about their financial state, continuing to pay themselves large salaries and bonuses and fat dividends to their shareholders.  In contrast, the company did little to reduce a mounting deficit on the pensions fund of their 40,000 global staff, putting their pensions in jeopardy. Indeed, Carillion raised its dividends every year for 16 years while running up a pensions deficit of £587m.  It paid out nearly £200m in dividends in the last two years alone.  The recently sacked CEO took home £660,000 a year plus bonuses.’

In other words, a classic case of a capitalist firm expanding as fast as it could, irrespective of the eventual constraints on the size of the market.  That the board kept paying out dividends (huge firms, like Apple, occasionally choose not to pay dividends, in order to help develop asset growth), suggests that the firm had become very much a money-go-round, sucking in investment to win more contracts to pay dividends to suck in investment and contracts.  This could have gone on, had the economy generally, and the government spending, kept on expanding.

‘revenues were barely changed between 2010 and 2016 at just over £5 billion and net assets actually shrank, even before the latest collapse to zero…The model came crashing down because of austerity. The main reason revenues are flat between 2010 and 2016 is that the Tories (and the Coalition before them) slashed public sector investment in roads, rail, ports and housing, and took an axe to real current spending, in areas such as education services, the NHS, the justice system, and so on. The pace of new privatisations and PFI since 2010 was not enough to top up the bucket with a big hole marked austerity.’

We have pointed out in these pages before that the only way in which PFI can be made profitable is often by ‘sweating’ the workforce, and driving down wages: the structural inability to be able to do this (due to legal and trade union constraints) means that the profit margins for these sort of deals are tight; and many firms end up handing the contract back (or selling it on to another firm).

Labour will make hay over the questions of how the government could keep awarding contracts (and, indeed, anyone who has ever been anywhere near public sector procurement could tell you that checks and guarantees of financial health are an essential part of the process).  But, venality, political expediency and outright corruption have always gone hand in hand with the market system.  This is especially so, as PFI-style deals are subject to commercial confidentiality (and the firms running the contracts are themselves exempt from freedom of information laws).

The National Audit office has produced a report on PFI deals, which points out:

‘There are currently over 700 operational PFI and PF2 deals, with a capital value of around £60 billion. Annual charges for these deals amounted to £10.3 billion in 2016-17. Even if no new deals are entered into, future charges which continue until the 2040s amount to £199 billion.

Further, there remain accounting and structural reasons, other than value for money, which may drive public bodies into considering PFI deals, even if Corbyn and McDonnell manage to clamp down on the practice (should they ever form a government).

The debates around PFI, though, are essentially about differing methods of borrowing money: McDonnell has committed himself to a version of Brown’s rules about only borrowing to invest in capital structures not current spending, and the last Labour manifesto promised to expand certain benefits and spending areas.  So they will have to borrow, which means giving interest payments to the same capitalist robbers who invest in Carillion.  In either case, the need to go and ask the owners of wealth for funds on their terms is a way of disciplining the state: its only other option is to tax directly to fund all its activity, but that would inevitably cut into profits and the accumulation of capital: with the most likely response being a capital strike as fund holders refuse to invest and try and hold their assets where the tax man cannot find them.

The real debate is not about the actual contractual structures by which the government persuades the owners of the world to let them fund services, but about us being able to directly control our own efforts and labour to attend to our own needs.  Any notion that ending PFI is a strike against capitalist fat cats is illusory.