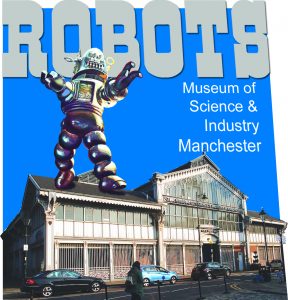 Some of the earliest objects that could be considered as robots were constructed by the catholic church from around 1500. They were clockwork machines that, for instance, showed Jesus on the cross shedding drops of wooden blood. Most people had no idea how they worked and regarded them as being based on magic. Thus the machines demonstrated the power and authority of the church.

So begins an exhibition at the Museum of Science and Industry in Manchester, on until the middle of April, which covers robots from the early days to the present and even the future. In medieval times anatomists described the human body as a complex machine, while clockwork models were used to show the movements of heavenly bodies. Later, automatons were built that performed actions such as dancing, and these enjoyed a golden age in the eighteenth century.

But it was in the last century that robots began to come into their own, with electric batteries used rather than clockwork. There is a section on cinematic representation of robots, including a replica of Maria from Fritz Lang’s 1927 film Metropolis, which is described as ‘the first blockbuster robot’. Industrial robots began to be used in factories from the 1960s, to carry out specific repetitive tasks, and for safety reasons they could not work with people.

There has been much technical progress in recent years, some of it exemplified in the displays. For instance, one company makes 3D-printed bionic hands that can be used not just by robots but also by people with amputations. Kaspar (developed at the University of Hertfordshire) can help children on the autism spectrum, for instance to read facial expressions and to feel less intimidated. Other examples included in the display are Baxter and YuMi, both of which can work alongside people. All this raises the problem of robots displacing human workers: a recent report (Guardian, 29 January) argues that up to a quarter of jobs in the northern UK could be replaced by robots by 2030, with Mansfield being the worst hit.

A question posed at the end of the exhibition we can lead to the reader to ponder: should robots be gender-neutral?