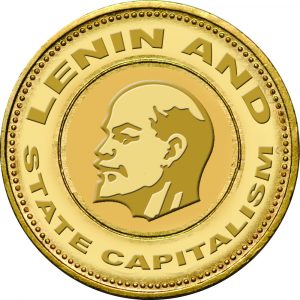 On several occasions Lenin wrote or spoke about a phenomenon that he called ‘state capitalism’. He took a favourable view of this phenomenon, regarding it as progressive. State capitalism, he argued, was not socialism but it was (or would be) a step forward toward socialism, especially for backward Russia.

Lenin first expressed this view in September 1917, the month before the Bolsheviks seized power, in a pamphlet entitled The Impending Catastrophe and How to Combat It. He reiterated it in March 1918 in an article on the ‘Brest Peace’ with Germany. He asserted the same view repeatedly during the last three years of his life (1921–24) –for example, in January 1923 in an article for a Russian émigrénewspaper (‘To the Russian Colony in North America’).

But what did Lenin mean by ‘state capitalism’? To answer this question we must study his statements carefully and place them in their contemporary context, as Lenin’s theorising was always a response to an immediate situation.

We must also bear in mind that between the revolution of October 1917 and Lenin’s death in January 1924 the Russian economy passed through three distinct phases:

From October 1917 to the middle of 1918 the situation was very complicated. In March 1918 Lenin speaks of an ‘intermingling’ of five elements: natural economy (households producing for their own consumption), petty commodity production, private capitalism, state capitalism, socialism).

From the middle of 1918 to early 1921 (the period of the Civil War) the Supreme Council of National Economy attempted to administer industry directly –that is, without using money where deemed possible. This system was later dubbed ‘war communism’.

In March 1921 the regime introduced the New Economic Policy (NEP), under which formal market relations were restored and industry was run by private enterprises and state trusts.

Lenin’s statements about state capitalism all appear in the first and third of these phases. He does not discuss the subject during the period of ‘war communism’.

The earliest works in which Lenin discusses ‘state capitalism’ appeared when World War One was still raging in Europe. Here he declares that ‘the most concrete example of state capitalism is in Germany’. In order to ensure the reliable functioning of the war machine, the German government had imposed strict controls over industry. The state not only regulated prices and subsidised the building of new factories but also reshaped the corporate structure and coordinated the allocation of materials. For instance, the Raw Materials Section of the War Ministry set up ‘war corporations’ –eventually about 200 of them –that though privately owned operated under state supervision. Neither private ownership nor production for profit was abolished, but the state directly involved itself in running the economy to an unprecedented degree.

Lenin acknowledged that the German state and its war economy remained subordinate to the German capitalist class and ultimately served its interests. Similar collaboration between private capitalists and the state could play a much more progressive role in Russia because there state power belonged to ‘the working class’. State capitalism in Soviet Russia was ‘a form of capitalism deliberately permitted and restricted by the working class’. For Lenin this made it not merely a form of capitalism but also a transitional form between capitalism and socialism (we leave the reader to ponder the logic or illogic of this position).

Here, of course, Lenin mystically equates ‘the working class’ with his own party. The real working class soon lost any identification it had initially felt with the Bolshevik regime.

State capitalism under the NEP took various forms. One major form was long-term leasing of productive assets to domestic or foreign capitalists under specific conditions. Lenin attached special importance to the leasing of assets –so-called ‘concessions’ –to foreign capitalists (concessionaires), for ‘without foreign capital to help develop our economy its rapid rehabilitation is inconceivable’. Assets offered on this basis included the oilfields at Baku and Grozny in the Caucasus (although local ‘communists’ evidently did not like the idea).

Lenin was disappointed that so few takers could be found. One early concessionaire was a young American doctor named Armand Hammer, whom Lenin persuaded to take an asbestos concession in the Urals. Later in his life, as chairman of the Occidental Petroleum Corporation, Hammer was to forge new commercial links between the United States and the Soviet Union.

The NEP also led to the creation of trusts that brought together groups of similar enterprises located in the same region. These trusts were wholly state-owned but were run as autonomous profit-making units selling their output on the market. The system of state trusts was at that time considered a form of ‘state capitalism’. (In 1968 a similar system was established in Hungary under the name of the New Economic Mechanism and labelled as ‘market socialism’, but Lenin still assumed that the market and socialism were incompatible.)

Debate on ‘the nature of the Soviet system’

The Marxist debate on ‘the nature of the Soviet system’ has focused almost exclusively on the system of the so-called ‘planned economy’ that was created under Stalin at the end of the 1920sand which lasted about sixty years, finally collapsing as a result of Gorbachev’s reforms. Lenin never said anything specifically about this system –for the simple reason that it did not arise until four or five years after his death. No one knows what he would have thought of it. Although it too is a form of state capitalism, it can be argued that it differed in certain key ways from the phenomena that Lenin had in mind when he wrote about ‘state capitalism’ at an earlier stage of the development of capitalism in Russia.