Brexit and the Border

The Irish Border question has reared its ugly head again.

The Border’s roots go back to a split in the 19th and early 20th century between two sections of the capitalist class in Ireland. In the South were fledgling capitalists who wanted protective tariffs behind which to develop. In the North were the industrial capitalists – the Titanic was built in Belfast – who didn’t want to be cut off behind tariff walls from free access to markets in the rest of Britain and its Empire.

At the founding convention of Sinn Fein in 1905 its leader, Arthur Griffith, put the case for the petty capitalists in the South:

‘If an Irish manufacturer cannot produce an article as cheaply as an English or other foreigner, only because his foreign competitor has larger resources at his disposal, then it is the first duty of the Irish nation to accord protection to that Irish manufacturer … Under the Sinn Fein policy … no possibility would be left … for a syndicate of unscrupulous English capitalists to crush out the home manufacturer and the home trader’ (Sinn Fein Policy, 1907 edition, p. 15 and p. 23).

The President of the Belfast Chamber of Commerce, J. Milner Balfour, put the point of view of the Northern capitalists in his evidence in July 1911 to the Committee on Irish Finance:

‘I think that any attempt to set up an independent Customs in such a way as to enable the Irish Parliament to create a Tariff between Ireland and the United Kingdom would be a very dangerous thing’(Minutes of Evidence, Committee on Irish Finance, cmnd 6799).

Dragging the workers into it

Both sides involved the working class in their dispute. The Irish Nationalists and Home Rulers, representing the petty capitalists of the South, relied on the Catholic majority on the island of Ireland. When Home Rule became an issue in the 1880s the Unionists, representing the big capitalists of the North, decided to play the ‘Orange card’, appealing to the Protestant majority in the North East, beating the Lambeg drum and declaring that ‘Home Rule is Rome Rule’. As a result the working class came to be divided on religious sectarian lines.

In the end the matter was settled by force of arms, in the Anglo-Irish war of 1919-21. The Treaty that ended this war set up an ‘Irish Free State’ in 26 of the 32 counties of Ireland, with the remaining six in the North East staying in the UK, but with their own parliament. Politically, the fears of both sides came about. ‘Home Rule’ did indeed turn out to be ‘Rome Rule’ while Northern Ireland became a Protestant statelet where the Catholic minority were victims of systematic discrimination.

At the beginning the Border did not have much economic significance despite its immense political significance as it had never been accepted by a section of the Nationalists and was vehemently insisted on by the Unionists. It assumed economic significance after 1932 when the anti-Treaty wing of the Nationalists under De Valera came to power and began to pursue the original Sinn Fein policy of economic nationalism. The result was a tariff war between the Twenty-Six Counties and the UK which went on until 1938 and which involved the erection of a ‘hard border’ with customs posts between the South and the North East of Ireland.

Successive Irish governments continued with the old Nationalist agenda of encouraging the development of Irish infant industries behind tariff walls. By the 1960s, however, both Ireland and Britain were keen to join what has now become the EU, but De Gaulle kept vetoing this. Instead, in 1965, Britain and Ireland signed an Anglo-Irish Free Trade Agreement which provided for Britain to abolish from 1 January 1966 all tariffs on Irish imports while Ireland would gradually reduce and eventually abolish tariffs on imports from the UK. From that point on, the economic significance of the border was considerably reduced. Even more so after Britain and Ireland both joined the EU in 1973 and its customs union (erecting a common external tariffs on imports from outside the EU). The border still existed but, following the 1998 Good Friday agreement had become less politically contentious.

It has become a bone of contention again because of Brexit or, rather, because of the British government’s political decision to interpret Brexit to mean withdrawing not just from the EU’s political institutions but also from the customs union and single market and its common standards.

Ghosts from the past

In contrast to a hundred years ago, neither the capitalists of the North nor those of the South of Ireland want an economic border on the island of Ireland. Both parts of the island are now more or less the same economically. Both are eager to attract overseas investment. In this respect there is still a difference – the rate at which profits are taxed in the two parts of Ireland. In the South the rate is much lower.

The DUP have been campaigning for Northern Ireland to have the power to align corporation tax with that in the South rather than being tied to that in the rest of the UK. This shows that their public humiliation of Theresa May when she was first in Brussels at the beginning of December to sign a deal on the matter was politically motivated, a reflection of the sectarian backwoodsmen and women that they are. They no longer represent the interest of capitalists in Northern Ireland. On this issue they don’t even represent the views of those who voted in the referendum as a majority in Northern Ireland voted Remain, i.e., to keep the status quo with no change to the border. 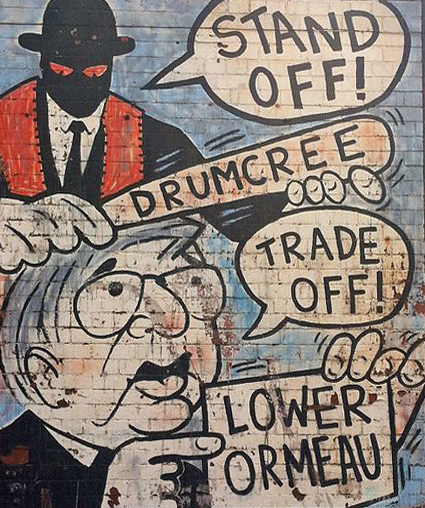 the past cannot be turned off just like that. They have a tendency to continue beyond their usefulness to those sections and come to haunt their successors, causing political problems. In the case of Ireland the Theresa May government has found this out the hard way, especially as they chose to do a deal with the DUP to get a parliamentary majority. Sinn Fein, too, is a prisoner of dogmas inherited from the intra-capitalist disputes of yesteryear – if their 7 Westminster MPs took their seats they could counter the 10 DUP MPs, but they refuse to do so as they are not prepared to go through the empty formality of swearing allegiance to ‘the Crown’.

Trade and tariffs are not really an issue for the majority class of wage and salary workers. These – and the politics associated with them – are capitalist issues of concern only to the capitalist class which that class can be left to settle itself. The trouble is that, in such intra-capitalist disputes, the working class suffer collateral damage in the sense of being stirred up against each other. In Northern Ireland this impeded the development even of ordinary, reformist Labourite, let alone revolutionary socialist, politics. For years there was only one issue in every election, towards which parties had to situate themselves – the Border. It really would be a tragedy if the sectarian conflicts of the past were to be re-ignited by short-sighted political decisions, as happened in the 1960s.

Borders are borders separating one capitalist state from another and have always been a nuisance for workers, impeding their free movement. Creating new borders, or reviving old ones, only makes things worse. And, besides, is a step away from the socialist aim of a world without frontiers.