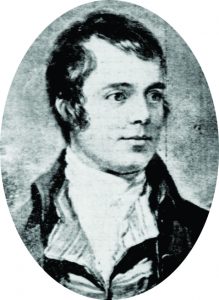 On 25 January Scots people round the world celebrate Burns night, piping in the haggis along with the neeps and tatties (turnips and potatoes), and all the rest of it, to celebrate Burns’ birthday. What do socialists think of Burns? Is it possible that Burns could be called a socialist?

The answer must be ‘No’. In the eighteenth century the co-operative, friendly, work-together society that socialists strive for had not yet been crystallised into a political programme; the aggressive, snarling, stab-in-the-back society that capitalism tries to impose on us all was triumphant, or about-to-be-triumphant, everywhere in the world. And Burns was a Scots nationalist (‘Scots whahaewi’ Wallace bled . . .).

Yet there are many facets of Burns’ poetry, and of Burns’ philosophy, that must strike a chord with all socialists  (and it is well worth making the effort, though sometimes it’s not easy, to understand Burns’ Ayrshire dialect of our common language.) For example, Burns was always (just like socialists) able to see the larger significance of what appeared to be small, unimportant events – to see the greater meaning lying behind something apparently trivial. There are two well-known examples.

In church one day Burns sat near a well-to-do lady, dressed in her Sunday finery, seemingly pleased with her smart appearance. But then Burns saw a louse, openly crawling up her fashionable bonnet. Burns enjoys the joke, pretending to tell the louse to clear out, and get its dinner off some ragged beggar instead; but then the contrast between the lady in her posh clothes, and the “winks and finger-ends” which showed that other people had seen the louse, leads to a thought of deeper moment:

‘Oh wad some Power the giftie gie us,

To see oursels as ithers see us, It wad frae mony a blunder free us, An’ foolish notion;

What airs in dress and gait wad lea’e us,

Then there was the time when Burns was out ploughing one December – he had a small farm – and suddenly realised that he had destroyed a mouse’s hide-out, which it had constructed with much labour to shelter itself from the winter weather (“ That wee bit heap o’ leaves an’ stibble, Has cost thee mony a weary nibble”). The poet apologises for breaking ‘Nature’s social union’, and goes on:

‘But Mousie, thou are no thy lane, [you aren’t alone]

In proving foresight may be vain

An’lea’e us nought but grief and pain,

Then Burns added an extra verse. In some ways, he thought, it could be said the mouse was better off, being only concerned with the present; while the poet could see nothing to please him in either the past or the future. ‘But Och! I backward cast my e’e, On prospects drear! An’ forward, tho I canna see, I guess and fear!’

Burns had little time for the social set-up of his day. In The Twa Dogs, Burns describes a landlord:

‘Our laird gets in his racked rents,

His coals, his kane, and all his stents, [kane – fowls paid as rent, stents – dues]

He rises when he likes himsel’,

His flunkies answer at his bell;’

He travels in a horse-drawn coach, and his silk purse is full of gold pieces. As for the landlord’s factor or land-agent, when the rent is due he tyrannises over the impecunious small tenants:

How they maun thole a factor’s snash: [must endure his abuse]

Then in The Cotter’s Saturday Night Burns praises ‘an honest man’, while dismissing his supposed social superiors – ‘Princes and lords are but the breath of kings’:

‘What is a lordling’s pomp! A cumbrous load,

Studied in arts of hell, in wickedness refin’d!’

Perhaps Burns’ philosophy is most clearly expressed in A man’s a man for a’ that.

‘The rank is but the guinea’s stamp,

As for the upper class:

Wha struts, and stares, and a’ that;

Tho’ hundreds worship at his word,

His ribband, star [decorations], and a’ that,

The man of independent mind,

He looks and laughs at a’ that’.

Then Burns sums it up:

‘Then let us pray [earnestly desire] that come it may,

That Sense and Worth, o’er all the earth,

Shall bear the gree, [be victorious], an’ a’ that.

It’s coming yet for a’ that,

That Man to Man, the world o’er,

Shall brothers be for a’ that. ‘

If you take ‘Man’ to be all humans, or if you add ‘Woman to Woman shall sisters be’, it’s a sentiment that socialists share.