Free Money for All 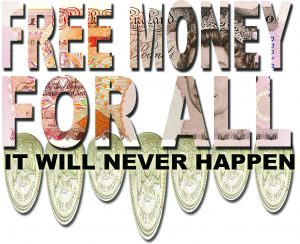 It will never happen

“Free Money for All” was the headline of a review in the Evening Standard (9 March) of a book advocating a universal, unconditional basic income (UBI) paid by the state to every citizen as a matter of right. The writer’s not the only one of course. There’s an international organisation advocating it, the Basic Income Earth Network or BIEN (basicincome.org).

It’s also the official policy of the Green Party. Richard Branson is the latest billionaire to lend his support to the proposal (virgin.com/richard-branson/experimenting-universalbasic-income). However, the scheme is impracticable under capitalism and would be unnecessary – in fact, meaningless – in a socialist society.

It is not the state handing out ‘free money’ that is impracticable but handing it out to everyone unconditionally. The state has long given ‘free money’ to the ‘poor’ but this has not been unconditional – you have to be poor to get it and have to prove that you are poor. In Britain up to 1948 this was paid out locally and administered by Poor Law Guardians. In 1948 these payments were nationalised and called ‘National Assistance’, later ‘Social Security’, and now ‘Income Support’. It’s still basically the Poor Law, though, with the government as the stingy Poor Law Guardians.

What the state is doing is making up the income of the poor to a set minimum – the poverty line – by giving them ‘free money’. It’s a very basic Basic Income.

It is conceivable that this could be made conditional only on proving that you are poor, as is the case now for old age pensioners. So if you are of working age there would be no need for you to prove that you are un it for work or have been actively seeking employment. As long as you were poor, you would get ‘income support’ unconditionally. Some UBI proponents argue that this might even be cheaper as it would remove the need for so much form- filling, checking and snooping. That’s a language governments understand and pilot schemes are already underway in Finland, Canada and the Netherlands to see if this is true. In the general election the Green Party promised one in Britain. It’s what Richard Branson wants too. Although this would be unconditional (apart of course from having to be poor in the sense of having an income, if any, below a given level), it is not universal. It might even be introduced but it would merely be a cost-saving reform of the so-called Welfare State. So, yes, such a ‘partial basic income’ is something possible under capitalism.

What BIEN, the Green Party and others want is universal ‘free money’, a payment by the state to everyone as a step towards a different kind of society or at least a different kind of capitalism. The big difference is that the ‘free money’ would be paid, not just to the poor, but to every wage and salary worker too, in fact to everyone, even capitalists (‘Green Party unveils manifesto plans to . . . give cash handouts to millionaires by introducing a universal basic income, as the Daily Mail (24 May) put it, typically). One major objection to this can be summed up in a single word –  Speenhamland.

In 1795 the magistrates in this Berkshire village decided to pay some ‘free money’ out of the Poor Law rate to poor but working farm labourers so as to bring their income up to a subsistence level. This amounted to a subsidy to their employers who were thereby able to continue to pay below subsistence, i.e. starvation wages. The practice later spread to other counties in the South of England. Marx mentions this in passing in Volume I of Capital:

‘At the end of the eighteenth century and during the first decade of the nineteenth, the English farmers and landlords enforced the absolute minimum of wages by paying the agricultural workers less than the minimum as actual wages and making up the balance in the form of parish relief.’

In fact, all state payments to workers are a wage subsidy to employers. The tax credits that Gordon Brown introduced are widely recognised as being this, but so are family allowances (which have relieved employers of the need to include an element or so much an element for maintaining a family in the wages they pay).

When in June last year there was a referendum in Switzerland on the principle of introducing UBI its advocates didn’t disguise the fact that its introduction would reduce wages. In fact they openly admitted, even proposed it:

‘Wages are going to adapt themselves to become a complement to Basic Income. For example with an Unconditional Basic Income of 2,500 Swiss Francs, someone who at present gets 8000 Swiss francs from their employer will not get more than about 5,500 or so wages which will come to be added to their Basic Income’ (rbi-oui.ch/laboratoire-sur-le- inancement-du-revenu-de-baseinconditionnel).

Beyond the wages system?

So, everybody would be given ‘free money’ by the state up to the poverty line and this would be topped up by wages paid by their employer. Some, such as the advocates of ‘Fully Automated Luxury Communism’, see this as a  first step towards breaking the link between work and consumption. They envisage the part coming from the state in people’s income gradually increasing until this is where their most of their income comes from – a gradual dying out of the wages system.

That’s not going to happen. If the wages system is going to be abolished (as it should be) it won’t and can’t be done gradually, but what about the state paying everyone a povertyline basic income? Could this happen? Capitalism is based on the wages system, on most people being forced by economic necessity to work for an employer to get money to buy the things that they need. A universal basic income paid to everyone would undermine this. While it would not remove the pressure to work for an employer it would put workers in a better bargaining position with their employers over wages. This wouldn’t be a bad thing of course, but it would have economic consequences. The higher wages would be at the expense of profits, but profits are what make the capitalist economy go round.

But more, where is the money to come from? Since the state produces nothing it would have to come from taxation but in the end taxation falls on profits (taxes on wages, as both Adam Smith and David Ricardo recognised, are passed on to employers). So, unless wages fall as the Swiss basic-incomers advocate, UBI would represent a massive redistribution of income from profits, the source of investment, to popular consumption. This would severely disrupt the capitalist economic system which is driven by investment for profit.

If, on the other hand, wages did fall, it would represent a redistribution of income within the capitalist class from those employing fewer workers to those employing many; which would cause other problems and disputes. So, as far as capitalism is concerned, it does not make sense and wouldn’t work. It’s just not going to happen. Even so, there is quite a bit of common ground in the arguments advanced in favour of UBI and those in favour of socialism. Both start from the same realisation that we are living in an age of potential abundance but that this abundance is not realised as resources are wasted in mere wealth-shifting activities such as investment banking, advertising, and legal services (our list is longer since socialism would render money and the whole financial system redundant). If these, and other forms of waste, were eliminated then society could produce enough to eliminate poverty, improve education and health care, and provide everybody with a comfortable   retirement. This is undoubtedly true. This redirecting of resources currently wasted, together with the removal of the profit barrier, would mean that more useful goods and services could be provided and an abundance – a sustainable abundance – achieved.

Socialism would also decouple consumption from work. In other words, what you consumed would no longer be tied to how much you obtained from the sale of your working skills or even to how much work you did (or were deemed to have done). After all, this is precisely what the slogan “from each according to their ability, to each according to their needs” means. But this of course is not going to be possible under capitalism.

So, to sum up: while an unconditional income for the poor is possible under capitalism as a reform of the welfare state, a universal unconditional basic income for everyone is not. The objectives which those who favour it want – a sustainable abundance and breaking the link between consumption and work – can only be achieved on the basis of the common ownership and democratic control of the means of production.