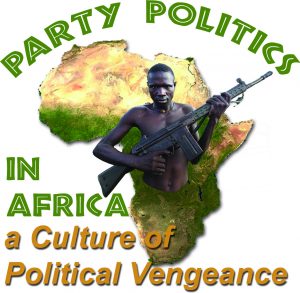 a culture of political vengeance

It is nowadays believed that political opposition parties in most African countries are indispensable to the parliamentary system of democracy in the sense that opposition parties help to promote checks and balances in the way society is governed.

After attaining their political independence some African countries adopted a one-party system of government on the premise that only the doctrine of ‘Marxism-Leninism’ could succeed in welding the diverse ethnic groups together.

After the end of the Second World War, and the division of the world into West and East, most African nationalist leaders looked to the Soviet Union, China and Cuba for political and logistical assistance in their political struggle against European colonialism. The military and economic development programmes achieved in Russia and China were a political marvel to African nationalists. Modibo Keïta in Mali was one of the first African political statesmen to adopt ‘Marxism-Leninism’ after achieving political independence. Then, in countries such as Angola, Mozambique, Zimbabwe and Namibia movements fighting for political independence turned into guerrilla movements given the hostile political conditions existing at that time. FRELIMO, SWAPO, ZANU-PF and MPLA received military assistance and training from China and the Soviet Union. In Ethiopia and Somalia, Mengistu Haile Mariam and Siad Barre set up single party political dictatorships that attempted to apply a so-called ‘socialist’ doctrine that  was in most cases resisted by those ethnic clans who practised Islamic religion and cultural traditions instead.

Meanwhile, one-party rule was imposed in Zambia and Tanzania, even though neither country suffered from ethnic tensions.

The Marxist conception of the economic conditions giving rise to social classes was seemingly alien to African historic sociological perceptions in the sense that the entrenched dualistic pattern of urban and rural communities to be found existing in every African country posed a challenge to the otherwise authoritarian political programmes implemented by the one-party state.

The one-party state properly defined was the antithesis of parliamentary democracy given that political freedom of any kind was banned. The one-party state was effectively a police state. The rapid growth achieved under one-party political regimes in terms of economic and peasant empowerment remain largely unrepresented and it is fair to point out that creation of co-operatives both in Zambia and Tanzania (Ujaama) did happen to raise agricultural production (peasant farmers) in the respective countries. But because state capitalism – let alone socialism – cannot succeed for long in a single country, unforeseen and unanticipated political and economic misfortunes that began in the Soviet Union led to the vast political changes that contributed to the collapse of one-party states in Africa and beyond. In particular, the wind of change that swept across Eastern Europe and Africa originated from political and economic developments taking place within the Soviet Union after President Gorbachev came to power in 1985, when the old state capitalist regime there began to crumble under its own economic inefficiency.

Without any kind of ideological, military and economic support from the Soviet Union one-party political regimes could not withstand the ever increasing demands for political patriotism by the masses.

In Zambia Dr Kaunda had survived two military coups in 1979 and 1987, while the command economy set up in 1972 was visibly crumbling, characterized by food shortages and rampant smuggling of mealie meal, sugar, cooking oil and kerosene to the nearby Congo (Zaire). In 1985 President Nyerere of Tanzania resigned as head of state and was succeeded by Ali Hassan Mwinyi. Then in 1986 the whole Copperbelt erupted into simultaneous uprising against the UNIP government due to persistent mealie meal shortages and Dr Kaunda reacted swiftly by confiscating privately owned milling companies. Many prominent politicians and Zambia Congress of Trade Union leaders were arrested and detained. In South Africa President de Klerk released Nelson Mandela from 27 years’ imprisonment and it was now clear that the political values that Dr Kaunda  had strongly held and supported had come to an end. In 1991 the first ever multi-party elections were held and Dr Kaunda and his party UNIP were defeated by the MMD under President Chiluba.

From 1990 until today political patriotism in Africa has given rise to endless civil wars and ethnic crises that were largely absent under one-party political regimes. Political pluralism, defined as periodic change of government through parliamentary elections, has proved to be a delicate political experiment in Africa since African political statesmen have shown a reluctance to surrender political power through the medium of the ballot box. Fraudulent elections have been employed and many attempts made to apply corrupt methods by those in power.

Corruption and outright police intimidation sponsored by the ruling parties have seen the suppression of the press and political demonstrations in many African countries. Parliamentary democracy has stalled into a political conflict between the ruling parties and the political opposition.

Why has there been so much violence during and after elections in Africa?

Political elites in African countries show no restraint in manipulating the masses through feeding them lies in order to win their political support during elections. In certain cases the personal ambition of elites are showcased in ethnic animosities that tend to end in violence and even genocide.

African countries face economic crises that are in many cases a consequence of political instability. Civil wars arise from lack of democracy or a complete disregard of the political freedom of the masses. In a divided and conflict ridden country, conventional notions of justice – which encompasses political equity and fair play – are conspicuous by their absence.

Woe to the vanquished

Although the international community continues to praise Zambia as a living example of political democracy and peaceful political transitions, the realities on the ground prove otherwise. In l994 the second President, Frederick Chiluba, amended the Zambian constitution to disqualify the former president Dr Kenneth Kaunda from standing as UNIP presidential candidate.

In 1996 Dr Kaunda was subjected to severe molestation and had also escaped a police-inspired assassination attempt during a political rally in Kabwe in 1994. Dr Kaunda was declared an immigrant and was immediately arrested and put in prison.

The culture of political vengeance is what defines African plural politics as those who are defeated during the election are treated as enemies of the political parties in power.

After winning the presidential elections in 2001 by defeating UPND leader Anderson Mazoka, President Mwanawasa slapped a corruption allegation on Frederick Chiluba in the name of stamping out corruption from the MMD.  Chiluba and his co-accused were only declared innocent by President Rupiah Banda in 2010 (after Mwanawasa had died). When President Sata defeated MMD President Rupiah Banda in 2011 he instructed the public prosecutor to withdraw Rupiah Banda’s presidential immunity in order to face corruption charges concerning the importation of oil from Nigeria in 2009. Rupiah Banda and his son Andrew were only declared free and innocent when President Lungu became president after the death of Sata in 2014.  The foregoing shows that previous leaders have been subjected to political vengeance by those who come to power.

The political longevity of the ZANU-PF under President Robert Mugabe in Zimbabwe was partly due to the charismatic status of Mugabe both within the African Union and Zimbabwe. The lack of a vibrant political opposition within Zimbabwe was betrayed by parochial ethnic and tribal allegiances to the ZANU-PF. Indeed both dictators Mobutu Sese Seko and Idi Amin were ousted from power through outside pressure (Rwanda and Tanzania). Political stability, defined as a cordial political relation between major political players in a given country, remain strained because opposition parties in Africa tend to dispute the results of presidential elections, notwithstanding any endorsement by overseas election monitors.

No way out under capitalism

The common perceptions held by eminent African politicians and intellectuals is the belief that Africa’s economic underdevelopment and political instability stems from the biased economic and political relations between Africa and European developed nations (neo-colonialism). Various reports published by the UN special agencies, the World Bank, the IMF and the Economic Commission of Africa reveal that parts of Africa often have the highest growth rates (and birth rates) while the rate of Africa’s social poverty remains higher than the rate of population growth. The continent is drought prone. Demography, drought and desertification are a triple threat to Africans’ continued existence and a triple source of political conflicts. The situation is exacerbated by a huge foreign debt, the depletion of natural resources, uneven regional economic development, and lack of physical capital as well as institutional decay.