Pamphlet Review: ‘The State and the Socialist Revolution’ 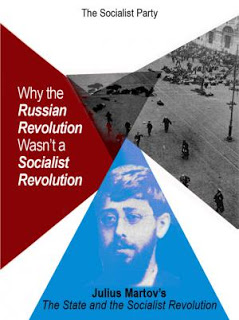 The Socialist Party has reprinted this classic Marxist refutation of Lenin’s distortions of Marx’s views on the state.

Lenin, who considered himself a Marxist and did in fact know his Marx, was concerned to justify in Marxist terms the Bolshevik coup and subsequent dictatorial rule in Russia. He claimed that Marx had advocated that the state should be ‘smashed’ in an armed uprising, that ‘dictatorship of the proletariat’ meant the dictatorship of a vanguard party acting on behalf of the proletariat, and he justified the dissolution of the Constituent Assembly on the grounds that the soviets were a higher form of democracy.

Julius Martov (1873-1923) was a long-standing member of the Russian Social Democratic Labour Party and had been a member of the editorial board of its publication Iskra alongside Lenin, Plekhanov and others. However, he and Lenin fell out over the issue of how Russian Social Democrats should organise themselves that was debated at their congress in 1903. Lenin had proposed that the party be organised as a disciplined, top-down body of professional revolutionaries. Martov was among those who favoured a more open party along the lines of other European Social Democratic parties. Lenin’s view won the vote and the party split into ‘Bolsheviks’ (the majority) and the ‘Mensheviks’ (the minority). Martov was, then, a ‘Menshevik’ though this was not how he described himself as ‘Menshevik’ was a Bolshevik term of abuse. Basically, he was an orthodox Social Democrat.

This pamphlet is a collection of articles Martov wrote in 1919 and 1921 and was originally published in Germany in 1923 under the title World Bolshevism. Most of it was translated into English and published as a pamphlet in 1939 as The State and the Socialist Revolution.

Martov denied that Marx had argued for the violent smashing of the state, but rather for its take-over, peaceably if possible; what was to be ‘smashed’ was not the whole state but only its ‘bureaucratic-military’ aspects which were to be ‘lopped off’ after its capture, leaving a democratised state as the instrument to use to dispossess the capitalist class and usher in socialism.

On the ‘dictatorship of the proletariat’, Martov pointed out that ‘dictatorship’ meant the exercise of full powers and that ‘of the proletariat’ meant that these powers were to be exercised, necessarily democratically, by the whole proletariat, not merely by a minority of them. In short, the term meant the rule of the working class, using the democratised state to effect the socialist revolution from capitalism to socialism. His article is a clear explanation of what Marx meant, even if the term itself is unfortunate as in some respects as inviting misinterpretation, an aspect Lenin exploited to the full.

The whole Russian revolutionary tradition had called for Tsarism to be replaced in the first instance by an elected Constituent Assembly which would decide Russia’s future constitution. An election to one did take place in November 1917, after the Bolshevik seizure of power, but  as the Bolsheviks failed to win a majority of seats they dissolved it. Martov, without denying that the soviets were makeshift democratic bodies, dismissed Lenin’s claim that they were more democratic than a central assembly directly elected by direct, secret and universal ballot; they were not elected by secret ballot and the only direct vote its members had was at local level, the higher levels being indirectly elected. In practice, it was even less democratic as they were manipulated by the Bolshevik party.

This edition has a new introduction and contains, as an appendix, the first printed translation of the opening chapter of World Bolshevism  in which Martov sets out to explain the attraction of Bolshevism amongst some sections of the working class in Europe. Also included are two reprints from the Socialist Standard: the review of the original pamphlet in 1940 and a review of Israel Getzler’s biography of Martov.