Greece: the Road to Bailoutistan 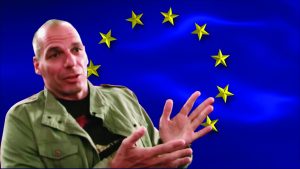 In his new book, Adults in the Room: My Battle with Europe’s Deep Establishment, Yanis Varoufakis sets out to portray himself as the political outsider who more than spoke truth to power: he stood up to power, and earned its scorn. He details his period as the Greek Minister of Finance as he tried to negotiate a write-down on Greece’s unsustainable debt, and an end to the practice of extend and pretend: his characterisation of the previous two bailouts from the European Central Bank, European Commission and the International Monetary Fund (known collectively as the Troika) which gave Greece more debt, turned it into a debtor colony (he names it Bailoutistan), and pretended that it could ever hope to pay the debt back.

Throughout, though, he reveals himself as a form of insider, a member of the international financial and academic set, with ‘good friends’ in major institutions throughout the world, including Lord Norman Lamont. He even had prior for working as an advisor for PASOK, the leftist Greek party that held political hegemony there for so long. He was, however, not a member of Syriza, and not part of the Eurogroup club of time-served politicians.

Like most politicians’ memoirs, though, he does go out of his way on point-scoring and dredging up old wounds. He claims Alexis Tsipras went and learnt to speak English on his advice; he recounts the reason why he turned up on British news in a tight couture shirt (he was travelling at short notice, and an aide was sent to buy him a shirt as he had no luggage); a vital document was not sent to the Eurogroup in time to be considered, and apparently this was deliberate political sabotage by a rival he claims was in hock to the Greek oligarchs.

The biggest betrayal was he says was that of Tsipras: they had an express agreement, Varoufakis claims, that they would stay the course. He gives us the game theory behind his strategy with the Troika: Varoufakis wanted a write-down on the value of the Greek debt, and a smaller required budget surplus to service, to allow some room for Greece to start growing again. He theorised that only a credible threat to default on some Eurogroup bonds, and thus destabilise the currency, would lead to that agreement. By his account, the refusal to sign up to a third bailout depended on being willing to issue the threat. In the end, Tsipras refused to issue the threat (in his review of this book, journalist Paul Mason suggests Tsipras backed down rather than risk civil war).

Varoufakis hung on to his post, trying to carry through some of his other reforms to tax collection and public spending. Tsipras launched the famous Greek referendum, to which the people replied “Oxi!” to a third bailout. Varoufakis reveals that Syriza players were secretly hoping for a yes vote, enabling them to back down and accept the bailout. At that point, Varoufakis resigned.

The book is useful on revealing the state of international institutions and Greek banks. Here’s how Varoufakis describes the deep corruption in Greek finance (worth quoting at length):

‘Here’s how our two bankers – let’s call them Aris and Zorba – did it.

Aris’ family founded offshore companies, to which Zorba agreed secretly to lend without guarantees the millions that Aris’ bank needed. Why such generosity towards a competitor? Because Aris and Zorba were sitting under the same proverbial oak. Desperate to raise money for his own bank, Zorba agreed the loan on condition that Aris’ bank lent a similar amount to Zorba’s family’s offshore outfits. Aris’ and Zorba’s families then used money from their offshore accounts to buy new shares in their own banks, thus fulfilling the regulator’s requirements that new capital be raised and thereby qualifying for the real money that the poor taxpayer was borrowing from the troika.

…they ended up owing nothing to anyone. Both sets of loans … were written off soon after being granted and transferred to the banks’ long list of non-performing loans….

…An even more outrageous trick was employed: in addition to millions from Zorba’s bank, the Aris family’s offshore companies also borrowed millions from Aris’ own bank. These loans were also written off as unserviceable or non-performing, or were used to buy office space that was resold to other parties only to be leased back by the bank or sold to it at inflated prices. The newly conjured up funds, or ‘profits’ would be used to buy new shares in the bank, keeping up the pretence that investors were injecting private capital into them.’

This is nothing less than institutional corruption and financial fraud. This, seemingly, didn’t just apply to Greece, as executives at Barclays have recently been accused of a similar money-go-round with their bailout loan from Qatar.

Something similar happened with what the European Central Bank concocted to enable Greece to make a €3.5 billion repayment. It was literally a case of a central bank creating money, but money for the sake of money, nothing useful is bought with all this effort, except to the political right to keep Greece subservient to its creditors (of course, as is made clear above, this pretend money creation is only possible with the political connivance of the state’s central bank which is the only type of bank that really can just issue as much money as it wants).

That is the central lesson of this book: Varoufakis’ position would have been sensible in any business, but this wasn’t business. It was politics. He recounts talking to Wolfgang Schäuble, the German Finance Minister and apparent Eminence grise of the Eurogroup, who seemed to believe that there was no alternative to but to continue what he was doing, and impose extreme austerity on Greece. Varoufakis tells of how many people, individually, expressed sympathy, but in practice, stuck to the organisation line in any committee or in public. Interestingly, the only person to come out with praise was Emanuel Macron, then working in the French finance ministry. He apparently backed Varoufakis’ ideas, which may be significant for the coming years.

The need for the Eurogroup to have credibility internationally, to maintain the line that debts cannot be written down or off, that economic union, ultimately means political union to avoid such destabilisation, meant it had to pursue the only policy it had. In the end Syriza complied, after Greece was subject to a medieval siege that saw essential drug supplies cut off (including insulin and thyroxin) and a humanitarian crisis ensued.

Varoufakis describes how the institutions gave him the run-around: not letting him know who or where the decision-makers were; treating any speech by him as if they were listening to ‘the Swedish National Anthem’; and releasing misleading briefings to the press about events at meetings (there were no proper minutes, but Varoufakis recorded them secretly). The EU, he says, is likely to give Britain the same treatment during the Brexit talks.

His book is a warm and witty account of a period of significant turbulence in a country of 10 million, with a government prepared to try and stand up to the financial power structures of the world. It is also a story of their failure to achieve even limited reform and compassion for the people of Greece. What they were asking for hardly amounted to revolution, but was an attempt to shore up capitalism. Sometimes, the system just works against itself.