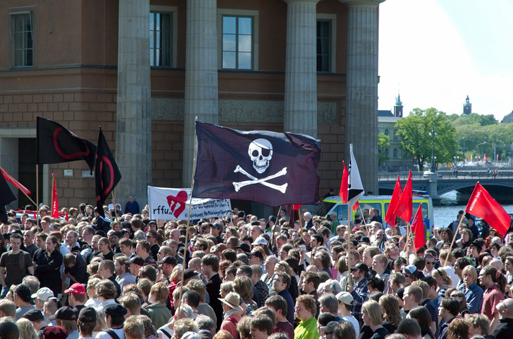 ‘We’ve had enough!’ The Pirate Party have captured the imagination of many in Iceland, especially the young. Iceland’s political landscape has been transformed by its general election result and the success of the Pirate Party which won 10 seats in the 63-seat parliament – up from the three it won in the 2013 general election, in a voter turn-out of 79.2 percent.  For the Icelandic establishment, they may still retain control of the helm but their ship of state is beginning to flounder.

The Pirate Party does not have a leader, although former Wikileaks activist and founding MP Birgitta Jonsdóttir tends to speak for it in public (perhaps, as a poet, she has a better way with words). She said her party subscribes to its agenda of ‘fundamental system change’.

They are challenging the assumption that political leaders are necessary and politics could not operate without them.

Ásta Guthrún Helgadóttir, another of their parliamentary members explained, ‘We are not here to gain power. We are here to distribute power.’

The Pirates’ core issues appeal to the popular sentiment in Iceland; direct democracy; freedom of expression; civil rights; and government transparency as set out in a crowd-sourced constitution which creates new rules for civic governance.

Political parties under the Pirate flag are now active in many countries. But we should remember that their libertarian attitudes were based on the history of real and sometimes not so real pirate ‘nations’. In the modern era, we have had Somalia which was notorious for its piracy, while one of the earliest foreign interventions of the newly-independent United States was the suppression of the Barbary pirates operating from North Africa. Our conception of piracy stems from the adventurers of those state-sponsored buccaneers and privateers from the time of Raleigh and Drake when the Caribbean was a melting pot of poor immigrants, political exiles and escaped plantation slaves.

Christopher Hill in Radical Pirates? described life at sea as based upon mutual aid, a much necessary survival tactic in which piracy was no exception in fostering a natural solidarity. Many pirates had crewed on merchant ships and grown to dislike the hierarchal authoritarianism.

Booty was divided up by a fairly egalitarian share system and those maimed received extra compensation. The Dutch Governor of Mauritius met a pirate crew and commented: ‘Every man had as much say as the captain’. The captain enjoyed no special privileges. Pirate captains were elected and could be deposed at any time for abuse of their authority; for cowardice or cruelty towards the crew and revealingly, for refusing ‘to take and plunder English Vessels’ for the pirates had turned their backs on the state and its laws and no lingering feelings of patriotism were to be allowed. The captain only had right of command in battle, otherwise, all decisions were made by the whole ship’s company.

Libertalia (or Libertatia) was a more-than-likely fictionalised colony founded in the late 17th century in Madagascar by pirates. Marcus Rediker, in Villains of All Nations, writes of Libertalia, ‘ [The] pirates were anti-capitalist, opposed to the dispossession that necessarily accompanied the historic ascent of wage labor and capitalism. They insisted that ‘every Man was born free, and had as much Right to what would support him, as to the Air he respired.’ They resented the ‘encroachments’ by which ‘Villains’ and ‘unmerciful Creditors’ grew ‘immensely rich’ as others became ‘wretchedly miserable.” They spoke of the ‘Natural right’ to ‘a Share of the Earth as is necessary for our Support.’ They saw piracy as a war of self-preservation. [They redefined the] fundamental relations of property and power. They had no need for money ‘where every Thing was in common, and no Hedge bounded any particular Man’s Property,’ and they decreed that ‘the Treasure and Cattle they were Masters of should be equally divided.’

Of course, the Pirate Party of Iceland will be unable to manage things much better than the conventional parties since it is capitalism, not the politicians, which runs its government and which is to blame for all our problems. They will have the doomed future of the original anarchistic pirates they wish to emulate, which they will soon discover if they ever do form a government.