Terrorism and War: Is There Any Difference? 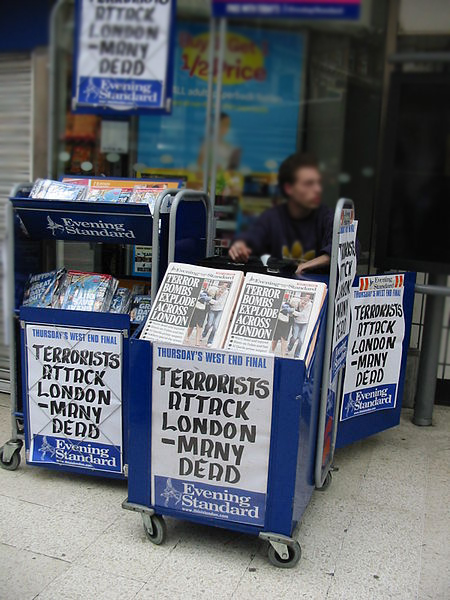 We say terror is terror whether unofficial and illegal terrorism or legalised state-sponsored terrorism through conventional warfare.

Since the turn of the century, rarely has a day gone by where there are no terror related stories in the news. Whether it is the Taliban, Al-Qaida or Islamic State, the perceived threat of terrorism against the United Kingdom has always appeared to be a real and ongoing danger to our lives. Whilst such media stories use the term ‘terrorism’ rather freely, they do so with no clear definition of what terrorism actually is. Such is the perception, exacerbated by tabloid news outlets, many individuals could be forgiven for believing that the majority of terrorist acts are committed by those of a radical Islamist background. However, the reality lies deeper than just Islamic State.

Trying to find a definition for terrorism is not easy, as there are a number of differing perspectives of what terrorism truly is. The official government definition in the United Kingdom can be found in the Terrorism Act of 2000, a summary of which is given as;

This definition can certainly be linked to Islamist terrorist acts such as 9/11, 7/7, and the recent surge of attacks in Paris, but the general interpretation of this definition fails to acknowledge such acts committed by a state. Violent government responses to the threat of terrorism have been commonplace throughout history, with the wars in Iraq and airstrikes in Syria being recent examples. These have been framed as ‘counter-insurgency’ operations as part of the ‘war on terror’, despite involving acts identical in nature to those committed by radical Islamist terrorists.

The only significant difference between the acts of ‘terrorism’ and ‘counter-insurgency’ is their purpose. Whilst groups such as Islamic State are pushing the ideals of radical Islam, capitalist governments from states such as Britain and the United States strive to achieve a change of government in countries which stand in the way of them pursuing their interests. To disguise the real aim, the American military is said to have been forced to rename their operations in Iraq from ‘Operation Iraqi Liberation’ to ‘Operation Iraqi Freedom’, due to fears of suspicious glances towards the acronym OIL.

It is also an expression of the globalisation mentioned by Marx and Engels in the Communist Manifesto, the constant requirement for accumulation of capital resulting in the need for capitalism to spread everywhere: ‘The need of a constantly expanding market for its products chases the bourgeoisie over the whole surface of the globe. It must nestle everywhere, settle everywhere, establish connections everywhere.’

Whilst the threat of terrorism often haunts a conflicted society like capitalism, the heightened media coverage inflates the issue. This fear-mongering allows the state a justification for military action. For the media, any politically or religiously influenced violent act perpetrated by opponents of a capitalist state is defined as terrorism, while the violent acts committed by capitalist states are praised as ‘fighting terror’. This confirms the view of the early 20th century Dutch criminologist Willem Bonger, that acts are only defined as criminal when the resulting damage is to capitalist interests. Violent and destructive state intervention is not regarded as criminal as it is aimed at defending the interests of the ruling class and capitalism as a whole.

Bonger’s theory was also confirmed by the Chilcot report released earlier this year. Despite the decision of Tony Blair to go to a war with Iraq being illegal under international law, no criminal charges have been bought, in spite of the 500,000 civilian lives that were lost as a result of this action. All that the report finds on this is that ‘the UK chose to join the invasion of Iraq before the peaceful options for disarmament had been exhausted’.

Clearly there are double standards applied when it comes to defining what a terrorist is, with the media choosing to marginalise a single group of people and to turn a blind eye to what the political elite in charge of the state does. However, it is not the current definition itself of terrorism that is problematic, but the interpretation of it by an international media platform owned by rich capitalists expressing the viewpoint of the rest of the ruling class.