Brexit, the Nation-state and the Workers 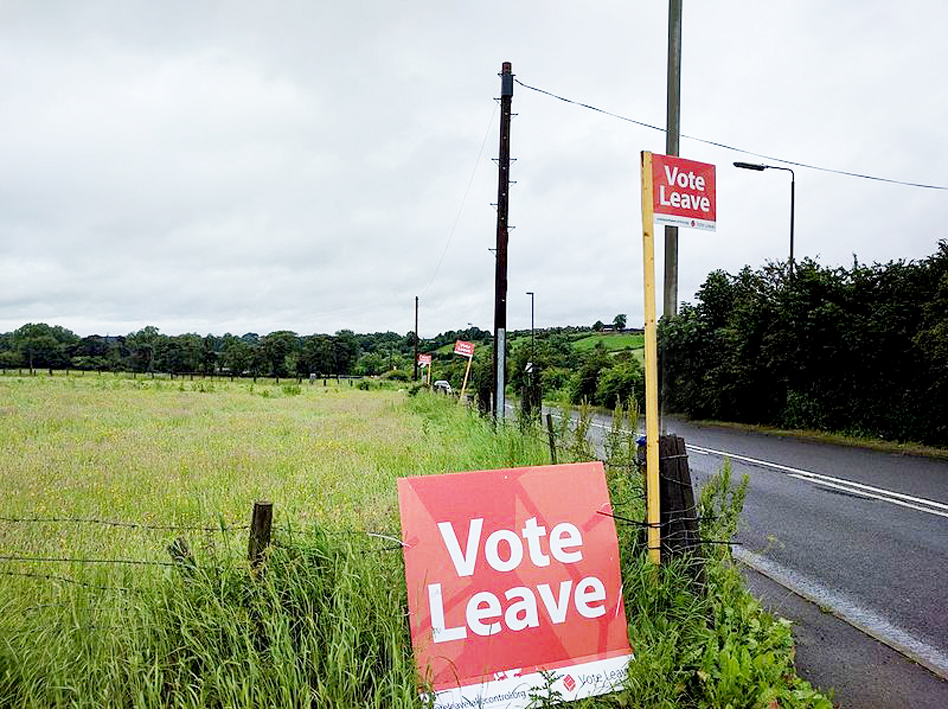 Over two months has now passed since the British people cast their vote on the UK’s  membership of the European Union. While the mass-participatory process of the referendum and aspects of the arguments used by either side were of some interest to socialists (rising above the norm of what now passes for politics), in the main the whole affair and its outcome were disappointing for us.

A question that was framed as having supreme importance (‘a once in a generation chance to set the future course of the country’) was yet again a debate about which particular version or configuration of capitalism should be selected. In this case, the specific question of whether a trans-national system of capitalism or a more traditional national organisation of capitalism, should be chosen.

Given that the vast majority of the electorate are members of the working class, that the turnout was relatively high and the vote was close to 50/50, it broadly means just under half the workers of Britain wanted to retain the current system while the other part wanted to return to the society that they either remembered or imagined existed before 1973. Socialists have no fundamental interest on adjudicating on this question. Nonetheless, Brexit will undoubtedly remain the dominant issue of British politics for years to come and it does shed some light on the current nature of the interaction between the state, the workers and the capitalists.

Split in the capitalist class

Although the referendum itself and the debate in the run-up to it were undoubtedly exercises in popular democracy, it wasn’t the authentic democracy that we espouse. The real struggle and motivation for the referendum was a conflict between two sections of the British capitalist class. It is true that many people attended public meetings, participated in radio phone-ins, went along to TV debates and engaged in on-line discussion forums. Most people genuinely believed in the views they shared with friends or colleagues.

However these ideas and arguments that they deployed were reflective of a wider climate that had been developing over the previous few decades. An underlying controversy has been growing in British capitalism at least since the late 1980s about the merits of Britain’s membership of the EU. Initially the manifestation of this was limited to the formation of small pressure groups associated with the Conservative Party and the occasional critical column in the right-wing press but Euro-scepticism soon spread into wider society. The very large capitalist companies have always supported the concept of the European Union. These multinationals can invest tens of billions of euros and accept regulations in return for a secure investment climate. They are not really concerned whether right-of-centre or left-of-centre governments are in power in any individual country across the many nations of Europe; all that counts is that there is a broadly similar, pro-business climate in these countries. The EU as the organisational framework in which this macro-policy is implemented is attractive to them.

However, some capitalists in Britain do not subscribe to this arrangement. These include small businesses mainly producing goods or supplying services for the local home market. They are concerned with day-to-day struggles to make and keep profits and for whom the regulations from Brussels are burdensome. Also there are large capitalist enterprises whose dominant trade in goods or services are to destinations outside the EU. It’s worth noting that the significant financial supporters of the Leave side came from these sectors of the economy (finance, retail, catering, publishing) where any benefits of EU membership are marginal.

Such a split in the capitalist class complicates the task of government. In most cases there is a consensual view amongst the capitalist class about the major economic questions of the day and the government (whatever its nominal persuasion) implements policies in line with this view with the justification to the public that it is necessary to promote and ensure prosperity. When a section of the capitalist class comes to a view that is divergent from more mainstream elements of the class (such as in this case the need to leave the EU) an alternative approach to directly liaising with government must be employed. Then enough voters (the vast majority being workers) must be encouraged to believe that the proposed policy needs to be implemented and they must be used to place pressure  on the government. In that sense the power that the universal franchise gives to workers is exploited. Given that the Leave side of capitalism were victorious, this leads to an analysis of the arguments that they deployed in the debate and why they ultimately proved successful.

First of all it has to be said that the Leave campaign told some whopping lies to get their vote out. The Remain side weren’t far behind in their overblown doom-laden predictions of economic catastrophe that would befall Britain after exit. Of course mendacity and exaggeration are part and parcel of political campaigns under capitalism and in fact one of the means by which workers are continually inveigled into supporting the continuation of the capitalist system election after election. The two main planks of the Leave campaign were the loss of democracy in being part of the EU and the inability to control levels of immigration from European countries into the UK (although the large EU membership fee was also a complaint). These two issues were summed up by their effective slogan of urging people to ‘take back control’.

The Leave side were appealing to two disparate target audiences with this message – firstly, patriotic and traditionalist people (more likely Tory voters) who never accepted the (slight) diminution of national sovereignty that was a requirement of EU membership. As socialists we say the argument about a lack of democracy is fallacious. Even in the context of political structures within capitalist states, the UK is one of the few democracies with both an unelected head of state and unelected second chamber. It has a vote counting system (first past the post) that typically creates huge discrepancies between votes received by any particular party and the number of MPs elected. In any case, real power within capitalism does not entirely lie with elected MPs. And of course the bureaucrats in Brussels, administering Euro-wide capitalism have no more or less a mandate than the bureaucrats in Whitehall handling exclusively British capitalism.

The second audience could be described as being more Labour-oriented in inclination. For example, the media reported disquiet in this constituency (‘working class communities’ as they were referred to) arising from globalisation and a feeling of being ‘left behind’. Capitalism has internationalised itself, which was always inevitable, but many workers are used to capitalism organised around the nation-state. Up to 2016, Britain may well have had the fastest growing economy in Europe, creating more jobs than the rest of EU but many of these came with low pay and zero hour contracts. One salient feature of this ‘new economy’ is that many workers (and not just those at the bottom of the income scale) have no prospect of being able to buy such a basic item of human need as a house. The Leave side cannily exploited this dissatisfaction by giving the impression that in the UK there were only a certain number of houses that could be built, a certain number of school places available, a certain number of appointments at GP surgeries and that every extra foreigner reduced the availability of these to the home citizen. The Leave campaign unscrupulously played on this sense of insecurity and anger to appeal to national instincts among workers. In that sense, many workers voted on national rather than class lines (as indeed they unfortunately do in most elections in most countries).

While many of the small left-wing groups encouraged a Leave vote (whereas socialists want an end to all versions of capitalism whether nationally based or globally organised), the main thrust of the Leave side had all the time-honoured hallmarks of right wing populism. This was most clearly manifested by the political party UKIP being the main grass-roots organisation of the Brexiteers, led by Nigel Farage. Farage is a former Tory and in his espousal of anti-immigrant solutions to the problems of modern society, especially during insecure times, has had many predecessors in European history. Currently Donald Trump is ploughing a similar furrow in the United States trying to exploit the disenchantment of a subset of American workers (white, blue collar) with the failures of capitalism to provide them with a decent life. In normal conditions, the Labour Party might have successfully countered the atavistic appeal of UKIP but one important side-effect of the campaign (that has become a front page story in its aftermath) concerns the travails of the Labour Party.

For a hundred years it has declared itself the voice of unionised workers and their families, initially seeking to transform the capitalist system, then settling for attempting to ameliorate the worst excesses of capitalism before finally under the Blair/Brown leadership being a straightforward manager of the system virtually indistinguishable from the rival Tory party. This complete capitulation to capitalism and abandonment of even the rhetoric of change has produced a wide swathe of disillusioned former Labour voters, many of whom were enticed into switching to UKIP. It is true that Jeremy Corbyn, as the current leader, has injected some excitement into progressive politics. However his election last year in some ways only emphasises the erratic and rudderless state of the Labour Party; going from Blair, arguably its most right-wing leader in history now to its most left-wing leader, and within a relatively short time frame.

Ultimately the outcome of the vote was surprising and generally unwanted by the leaders of global capitalism. Since the end of the Second World War, the trend has been towards a globalised organisation of capitalism driven by the major international companies (the top tier of capitalism). Of course as with all socio-economic patterns, this trend does not proceed smoothly but occurs in fits and starts though the underlying pattern is clearly evident.

Will Brexit be looked back on as a one-off oddity peculiar to Britain or as a harbinger of things to come, marking a departure from this particular trend of globalisation? In any case over the years, capitalism has proved itself an adaptable system and ultimately will have no serious problem accommodating Britain outside the EU.

It can be difficult to extract good news for socialists when commenting on the current affairs of capitalism. From a socialist perspective, we deplore the fact that the Leave campaign deliberately tapped into chauvinistic feelings in workers to obtain their desired outcome. Conversely what was encouraging was that many workers ignored the dire warnings of the usual paid lobbyists of capitalism (the Bank of England, the OECD, the CBI, etc.) in arriving at their decision. It shows that workers are not always the political sheep that some political strategists assume. Finally, though, it’s only when workers across the world discard all notions that countries and national identities are a central part of the political landscape that real changes can be made to all our lives.