Book Reviews: ‘War – What is It Good For?’, & ‘Burning Country – Syrians in Revolution and War’ 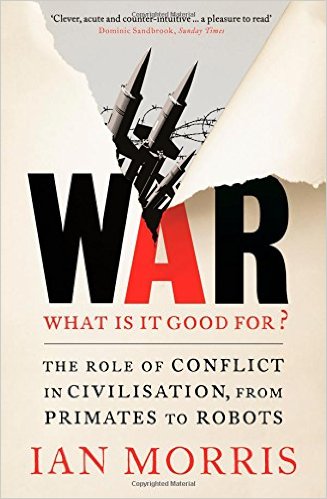 Absolutely nothing, according to the song, but Ian Morris claims here that war has had a much more useful role in human history. It has made people safer, healthier, longer-lived and richer, leading to a society with far less risk of violent death and an enormous expansion in what is produced. The basic argument is that war has resulted in stronger states and a consequent suppression of violence. Hence ‘[i]n 2010 the planet was more peaceful and prosperous than ever before.’

It is not suggested that all wars have been beneficial in this way, only what Morris calls productive wars, those that accelerated the growth of strong states (which he terms Leviathans after Thomas Hobbes). Many wars have been counter-productive, or at least unproductive, though in terms of those killed these have been far less lethal than the productive wars. Behind all this is the view that, left to themselves and without a big and powerful government to keep them in line, people will be constantly at each other’s throats, as supposedly in small-scale societies such as the Stone Age and modern hunter-gatherers. This remains a contentious issue and has been discussed in these pages before (August and September 2014).

On Morris’s account, the last five millennia BCE saw productive wars, with rates of violent death falling by up to three quarters as a result. But subsequently the horsemen of the Eurasian steppes prevented the imperial powers from providing proper security for their subjects, which led to the disruption of trade and to troops plundering peasants to make up for the shortfall in their pay from taxes. By the fourteenth century CE, much of Eurasia was under ‘feudal anarchy’ and casual violence.

Almost a millennium and a half of counter-productive war came to an end, which Morris dates specifically to 1415: not because this was the year of Agincourt but because it was when the Portuguese king started to expand his rule into Africa, thereby setting off productive intercontinental war. So began five hundred years of European war against the rest of the world, leading to vast colonial empires. It involved the suppression of local wars and banditry and eventually to safer and richer lives, so it was ‘the most productive war in history’.

The Second World War was also productive, as it led to the United States taking over as the globocop, a role that Britain was no longer capable of playing. The last chapter is a kind of paean to the military and economic power of the US, which can use overwhelming force to keep other countries in line. But it may only have a few decades left, since drones and robots will take over the fighting, and computerisation will make globocops unnecessary. Until then the world needs a US globocop, a credible Leviathan that will preserve the status quo, whereby people continue to become safer and more prosperous.

As can be seen, this line of argument relies on looking at things in the very long run, discounting all the killing and suffering that take place before the ‘benefits’ emerge. European colonial conquest involved genocide, slavery and massive exploitation, and it is a breathtaking understatement to comment that ‘the defeated fared less well than the victors’. There are no references to child labour, but no doubt that could also be categorised as productive, on the grounds that it contributed to the development of capitalism and the profits of the capitalist class.

Class society needs a strong central power to defend the interests of the ruling class and to suppress ‘unlicensed’ bandits such as the Mafia. There is technological progress due to war, but this is just because resources are directed at this end, not that war is needed for technological advances. War is incredibly wasteful in terms of lives and resources, which could be put instead to meeting human need. Any decline in violence is basically due to the cost and difficulty of resisting US global hegemony: ‘The essence of U.S. military predominance in the world is, ultimately, the fact that it can, at will, with only a few hours’ notice, drop bombs at absolutely any point on the surface of the planet’ (David Graeber: Debt).

Morris writes that ‘we cannot just decide to end war’. What we can do, though, is decide to establish a society in which war is inconceivable. Socialism has been possible for decades, and we do not need wars or globocops or drones to guarantee a society of true peace and well-being. 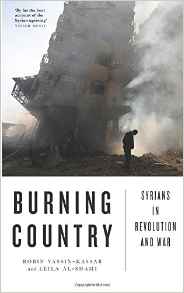 Of all the countries swept by the ‘Arab Spring’ of 2011, Syria has been the most unfortunate. The sole response of the Assad regime to peaceful popular protest was ruthless violent repression, eventually resulting in a devastating many-sided civil war, intervention by rival regional and world powers, and massive flows of refugees within the country and across its borders. The authors have drawn on a variety of sources, including interviews with direct participants in the events, to produce an illuminating and often harrowing account from an anti-authoritarian left-wing perspective.

The book begins with necessary historical background, focusing mainly on the various divisions within Syrian society and on the origin and evolution of the Ba’ath (Arab nationalist) regime under Hafez Assad and then his son Bashar. Chapters 3-4 portray the nonviolent phase of the ‘revolution from below’; Chapter 5 explains how resistance to the regime – inevitably under the circumstances – came to assume a primarily military form. Chapter 6 discusses the growth of the initially weak Islamist forces. Chapter 7 (‘Dispossession and Exile’) describes how millions of Syrians became refugees. Chapter 8 highlights the cultural renaissance that accompanied the uprising. Chapter 9 deals with the failure of old opponents of the Ba’ath regime inside and outside the country to play a significant role. The last chapter analyzes the attitudes of the international left toward events in Syria. An epilogue brings the story up to date as of October 2015.

Yassin-Kassab and Al-Shami give a preview of their analysis in the Preface. In the areas where the government machine broke down ordinary people began to run their own affairs: ‘For a few brief moments the people changed everything.’). But then

‘the counter-revolutions ground them down. The regime’s scorched earth strategy drove millions from the country; those who remained in the liberated zones were forced to focus on survival. Syria became the site of proxy wars, of Sunni-Shia rivalries, of foreign interventions. Iranian and transnational Shia forces backed the regime; foreign Sunni extremists flocked to join the Islamic State… Nobody supported the revolutionaries. ‘

Note that the authors perceive not one but two counter-revolutions – the one represented by the regime and its foreign backers (Iran and later Russia), the other by the Islamic State (IS) and its wealthy patrons in the Gulf States. They even find covert links between these two forces: Assad assisted the growth of Islamism by releasing many Islamist militants from prison. Islamist predominance in the anti-regime camp is very much to the advantage of Assad, enabling him to present himself to a confused world as ‘the lesser evil.’

There is evidently widespread bitterness among non-Islamist oppositionists that they have received so little material and moral support from the West and from the international left. It is true that the slogans of the uprising initially emphasized ‘Western ideals’ like ‘freedom’ and ‘democracy.’ Western politicians, however, are at best ambivalent about ideals; what they need is clients who can be trusted to serve the interests of the West and its regional allies. There is good reason to doubt the reliability in this capacity of Syrian ‘revolutionaries’ who, for instance, criticize Assad for insufficient militancy in the face of the Israeli enemy.

As for the international left, most of it – under the influence of its Bolshevik core – is inclined to support (‘critically’ or otherwise) the Assad regime. That is because ‘the enemy of my enemy is my friend’ – their ‘enemy’ being not the world capitalist system but merely ‘US imperialism’ and its Zionist ally. Such is the stance, for example, of the Stop the War Coalition. It is only in the circles of the anti-authoritarian left that Syrian democrats can hope to find sympathy.

Although clearly written and coherently organized, this is a demanding book to read for anyone not already familiar with the complexities of Syrian society and the many political trends and movements within it. But if you want to understand what has been happening in ‘the burning country’ it is well worth the effort.