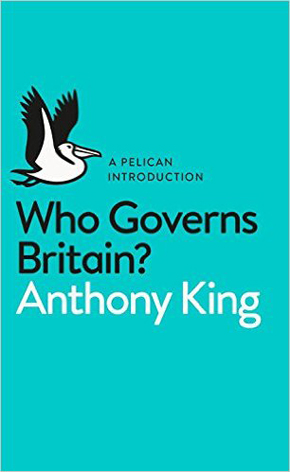 It’s a good question, and King surveys twelve possible answers, from voters and party members to MPs and the media. One theme of the book is that the ‘classic’ form of post-war government, which lasted till the 1970s, no longer holds. The political power of special advisers has increased; fewer politicians now have extensive experience of working outside politics; ministers are expected to be more pro-active, and civil servants no longer provide them with knowledgeable critiques of government policy; parliamentary select committees are more independent-minded than previously, and the judiciary plays a larger role than it used to. But one wonders what effect all this has on the majority of the population.

King makes the important point that the UK is not remotely a sovereign state, one possessing supreme power over its own affairs. It is subject to many international organisations, most obviously the EU, but also the UN, NATO, G7, IMF, World Health Organisation and so on. Multinational companies are extremely powerful too. More generally, the UK is affected by impersonal market forces (i.e. the ups and downs of world capitalism). Quite apart from the current recession, there was the massive loan from the IMF in 1976, forced on the government after foreign-exchange reserves drained away. Back in 1931, during the Great Depression, a ‘National’ government was formed after overseas investors lost confidence in the minority Labour government.

An interesting chapter deals with the media, who report on nearly everything except their own relations with ministers and party leaders. Radio and TV are legally required to be impartial (!), but no such restrictions apply to the press. Rupert Murdoch exercised enormous influence over Tony Blair, and was described as sometimes more powerful than the Prime Minister. Many politicians are cowed by fear of having the media ridicule them or delve into their private life.

One chapter covers ‘interests’, people or groups with some cause in common. Thatcher greatly disliked vested interests (well, some of them, anyway), and trade unions are no longer anywhere near as influential as they once were. Some interests are not officially organised as such, and there is a brief reference to ‘the well off’, described as ‘the dominant interest’, with no real competitors. But there is absolutely no recognition of the power of the one percent, and how government policies defend them. Murdoch’s influence on politicians derives from his media power, but his reason for exerting it the way he does is due to his position as a capitalist.

King’s final answer to his question is that ‘no one institution and certainly no one individual’ governs Britain. He sets out a rather feeble proposal for a ‘Nordic style’ system, where parties try to accommodate their disagreements. But this will make no substantial difference, for it is capitalism and the capitalist class that rule, something most academic observers of politics fail to spot. 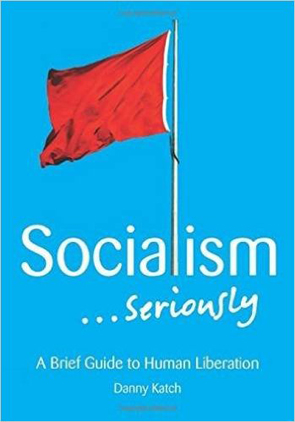 Katch has produced what is in many ways an engaging attempt to introduce socialist and anti-capitalist ideas to people who are curious or just vaguely interested. It is a humorous, well-written and produced pocket-sized book that may well serve at least part of its purpose. But there are some flaws – and big ones.

Katch is a member of the British SWP’s sister party in the US and the book is hampered by the type of ideological baggage implied by this. In particular, it fetishes the past from a Leninist point of view and romanticises ‘workers’ struggles’ in the way followers of Lenin and Trotsky are wont to do. This is the case with more recent rebellions like the ‘Arab Spring’ but is more seriously so with the Bolshevik Revolution in Russia in 1917 – an iconic event for the Trotskyist left which defines their very existence but which hobbles their ability to both engage with other workers and develop a revolutionary strategy which doesn’t appear archaic.

Katch does his best to attempt this, but fails miserably. He fetishises workers’ councils (soviets) as the ultimate form of democratic expression for the working class without ever explaining why these arose in Russia and other countries in the first place (backward political development and lack of maturity of bourgeois political democracy). He also – as is the case with most Trotskyists – conveniently forgets to mention that it was the Bolsheviks who smashed the workers’ councils in Russia when they were no longer convenient and did not submit to the iron will of Lenin and his followers. Furthermore, any idea that countries like the US or the UK will in the 21st century spontaneously create soviets as a means of bringing about a socialist revolution sounds fantastical and other-worldly, as indeed it is.

The conception advanced of what socialism is also tends to be confused. There is no clear and consistent sense that it involves the creation of relationships that have rendered the defining categories of capitalism obsolete – ie working for wages, the accumulation of capital out of profits, the production of goods for sale on a market and distribution of goods via prices and money. It usually sounds instead like some sort of hi-tech state-run capitalism planned and administered by workers’ councils and where racism, sexism, etc have disappeared. There is a chapter called ‘Imagine’ where Katch comes nearer to describing a socialist society than most Trotskyists do but he still hedges his bets here, no doubt lest he sound too ‘utopian’.

There is also a slightly odd chapter towards the end on religion where you get the distinct impression he wants to say what socialists think – that religion is a diversion from solving society’s problems and involves beliefs that are not tenable or capable of standing up to scientific enquiry. Yet he clearly doesn’t want to upset the followers of Islam the SWP have been trying to cosy up to for years (on the usual Trotskyist grounds that they think an enemy of an enemy must be a friend). So again he pulls his punches.

All in all, another missed opportunity from a Trotskyist writer probably capable of better.

No Room for Dissent 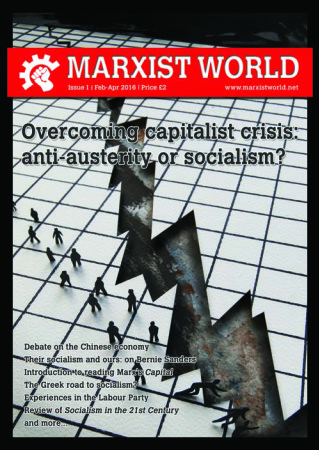 This is the first issue journal of the small split from the Trotskyist so-called ‘Socialist Party of England and Wales’ (known as SPEW and not part of the World Socialist Movement) ostensibly over the causes of economic crisis. The journal carries articles on the character of China’s economy, experiences in the Labour Party, Marx’s Capital, Bernie Sanders, a reprint of an article by Peter Taaffe, ‘The Greek Road to Socialism’, Electronic Voting in the Trade Unions and a book review.

Marxist World claims SPEW hold an underconsumptionist view of economic crisis; that there is not enough purchasing power to buy back commodities produced, whereas they claim the ‘tendency of the rate of profit to fall’ since the 1970s has caused the current economic crisis. This did not sit well with SPEW leader Peter Taaffe, and after some debate two critics were ‘indefinitely suspended’ and eleven ended up leaving.

The Labour Party account included here is one of left-wing Labour members’ disagreements with right-wing Labour members (business as usual in the Labour Party) and the left-wing author concludes by seeming happy to remain on this merry-go-round. The Peter Taaffe reprint argues the old Communist Party was reformist, Marxist World use this to argue SPEW are reformist. The Bernie Sanders article is a good exposé of Sanders, but boils down the problem to the wrong leader, never considering that leaders are unnecessary if not harmful.

Trotsky answered at a Bolshevik party congress in 1924 ‘Comrades, none of us wants to be or can be right against the party. In the last analysis, the party is always right, because the party is the sole historical instrument that the working class possesses for the solution of its fundamental tasks. I have already said that nothing would be simpler than to say before the party that all these criticisms, all these declarations, warnings, and protests – all were mistaken from beginning to end. I cannot say so, however, comrades, because I do not think it. I know that no one can be right against the party. It is only possible to be right with the party and through it since history has not created any other way to determine the correct position.’ And ‘We can only be right with and by the Party, for history has provided no other way of being in the right’.

The lesson here we should conclude is: don’t swap leaders, especially not living ones for dead ones.