Book Reviews: ‘Marxism in a Lost Century – A Biography of Paul Mattick’, & ‘Social Class in the 21st Century’

‘Marxism in a Lost Century: A Biography of Paul Mattick’, by Gary Roth. Chicago. Haymarket Books, 2015 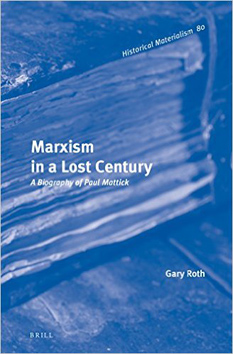 This biography will be of special interest to many readers of the Socialist Standard. While Paul Mattick (1904–1981) never joined the World Socialist Movement (WSM), his views were sufficiently close to ours for him to be a major contributor of articles and book reviews to the Western Socialist, journal of the World Socialist Party of the US, from the late 1940s to the late 1950s.

Mattick’s life spanned eras and continents. In his youth he participated in the grassroots upheavals in Germany that followed in the wake of World War One as an activist in the movement that came to be known as ‘council communism’ (Rätekommunismus). In 1926 he moved to the United States and settled in Chicago, where his main involvement was with the unemployed movement that developed in the early 1930s. He was a prolific writer in several genres – journalism, fiction, and travel writing as well as social criticism and political economy.

It is convenient to consider the book in three parts. Chapters 2–4 portray the life and activity of the young Mattick in Germany. Chapters 5–9 focus on his activism in the US in the late 1920s and the 1930s. The main theme of the remaining chapters is Mattick’s tireless efforts to develop and disseminate his ideas.

Paul Mattick grew up under harsh conditions in the poor family of an unskilled worker, first in rural East Prussia (now in Poland) and then in Berlin. He left school at the age of 14 to become an apprentice toolmaker in the Siemens concern. At about the same time he became politically active – first in the Free Socialist Youth, the youth group attached to the Social Democratic Party, and later in the Communist Workers’ Party of Germany (German abbreviation – KAPD), a ‘left communist’ breakaway from the Communist Party of Germany (KPD).

Chapters 3 and 4 provide a valuable account of the formation, evolution, and decline of the KAPD. The KAPD and like-minded council communist groups in other European countries opposed both the classical social-democratic model of the parliamentary party and the Leninist model of the vanguard party (‘the revolution is no party matter’). As their name indicates, they envisioned workers’ councils as the organisational vehicle of revolutionary action.

In contrast to the KPD, which quickly came to depend financially and politically on the Bolshevik regime, the KAPD maintained an independent outlook and developed an analysis of the new state-capitalist system emerging in Russia.

During the first few years after his emigration Mattick was preoccupied with the practical problems of adapting to life in a new country. He found a provisional political home in the syndicalist Industrial Workers of the World (IWW or ‘Wobblies’).

From 1932 onward Mattick played a prominent role in the effort to organise the unemployed in Chicago, who at the height of the Great Depression accounted for 40 percent of the city’s workforce. He worked through the Workers’ League, an unemployed affiliate of the Proletarian Party – a group that (like the WSPUS) had its origins in the Socialist Party of Michigan. Mattick and his colleagues – a word he preferred to ‘comrades’ – based their organising work in the network of abandoned storefronts that unemployed workers took over and used as local ‘relief stations’ (with kitchens and sleeping quarters), meeting places and print shops.

Mattick also succeeded in creating a fairly small but active group of council communists under the name of the United Workers’ Party, with a journal entitled International Council Correspondence.

The author devotes a great deal of space to the efforts made by Mattick over many years to interest left-wing editors and publishers in his writings. With few exceptions, such as the Western Socialist, the influence of Leninism within the left made these efforts fruitless until the New Left finally came to his rescue in the late 1960s. The West German student movement in particular began to show an interest in Mattick as a living link with the country’s ‘revolutionary’ past.

Mattick was in touch at various times with numerous left-wing scholars who he hoped would help him gain public recognition and get his work published. The author provides considerable detail about these interactions. However, it is disappointing that for some reason he ignores Mattick’s close relations with the WSPUS and its members during the period when he and his family were living in Boston.

There is also some scattered information about the content of Mattick’s writing – not as much as the reader might wish but as much as can reasonably be expected in a biography. Special attention is rightly paid to Mattick’s main contributions to Marxian political economy. Best known is his critique of Keynesian economics, which finally appeared in book form in 1969 under the title Marx and Keynes: The Limits of the Mixed Economy. Mattick showed that government intervention could modify the workings of capitalism only temporarily and within definite limits.

Mattick also had a persistent interest in the theory of the business cycle and capitalist crisis. Here he was greatly influenced by Henryk Grossman, whose work The Law of Accumulation and Breakdown of the Capitalist System happened to come out just before the stock market crash of 1929. Grossman’s analysis relied heavily on the schema at the end of the second volume of Marx’s Capital and the first section of the third volume, and stressed the crucial role played by the tendency of the rate of profit to fall, as well as constraints on an ever-rising mass of profit. Following Grossman, Mattick believed that capitalist crisis does not automatically lead to socialist revolution but does create an ‘objectively revolutionary situation.’ However, Grossman – a member of the Communist Party of Poland – had concepts of revolution and the post-revolutionary society very different from those of Mattick.

Besides its political and theoretical content, Roth’s biography of Mattick is of great human interest. It tells us a lot about what life was like at various times for working people in both Germany and the United States. The book is worth reading for that alone.

This book is based on the findings of the Great British Class Survey (see www.bbc.co.uk/news/magazine-22000973), previously discussed in the Socialist Standard in May 2013. This was launched on the BBC website in 2011, and the analysis here derives from an impressive first round of 161,000 responses, supplemented by further face-to-face interviews, as those who took part in the online survey were disproportionately higher up in the social scale and living in England.

The authors distinguish three kinds of capital (this term is not used in the Marxist sense of means of production used to employ wage labour for the sake of profit). Economic capital is a person’s income and wealth (savings and the value of their home). Cultural capital, a concept taken from the work of Pierre Bourdieu, is a matter of a person’s tastes and interests, and is divided into two kinds: highbrow (going to art galleries, eating in French restaurants, liking jazz, etc) or emerging (using the internet, going to the gym, spending time with friends and so on). Social capital relates to your social networks, the kinds of people you know and how well you know them (knowing ‘the right people’ may help you get a job with a law firm but won’t help with a job in IT).

Based on these criteria, no fewer than seven social classes are identified: elite, established middle class, technical middle class, new affluent workers, traditional working class, emerging service workers and precariat. A person’s place in this is determined by their income and savings, their ‘score’ for the range of people in different occupations they know (boosted by knowing those in higher status jobs), and their cultural capital. For instance, new affluent workers will have on average household income of £29,000 and little in savings (so ‘affluent’ is something of a misnomer), and be roughly in the middle in terms of the value of their house. But they score quite highly for their range of social contacts and they have rather more emerging than highbrow cultural capital. Though social class in the way used here is not directly linked to occupation, the authors have stated elsewhere that members of this class might well work as electricians, postal workers and catering assistants, among others.

The classes falling between the elite and the precariat do not form a simple hierarchy, but are clearly distinguished from those at the top and bottom. The precariat, forming about 15% of the population, have an average household income of just £8,000 and very little in savings, and get low scores for cultural and social capital. They are often stigmatised, and women in this class were well aware that they were at the bottom of the heap, while men were ‘more resistant’ to consideration of class.

In contrast, the elite had average household income of £89,000, with sizeable savings and valuable houses; they had extensive social contacts and scored particularly highly for highbrow cultural capital. They form about 6 percent of the population, so they are far more than just the top 1 percent (compare Thomas Piketty’s discussion of the ‘9 percent’, those in the top 10 percent but not in the top 1 percent, who they are clearly distinguished from). This income (which is for the household and so may include more than one wage) is well above the average but of course is very small when compared to the really top incomes, of millions a year, for those who may have billions in wealth and several large mansions. And assets accumulated from the past (whether savings or houses) are far more important than current income. There is relatively little mobility into this elite, and also little down from it. As the richest get even richer and pull away from the rest of the population, so those lower down have much farther to go to get to the top (a larger hill to climb, in the metaphor used here).

The volume contains a lot of other interesting points, some related to changes in society. Highbrow cultural capital is increasingly confined to an older age group, and there are links between class and age: new affluent workers and emerging service workers are much younger on average than those in the traditional working class. Attending a prestigious university such as Oxford, Cambridge or the LSE is still a real help in joining the elite and so amassing large savings. Most people have more wide-ranging social ties than fifty years ago. Less than a third of respondents thought of themselves as belonging to a social class, though when pressed 62 percent ‘gave themselves some kind of working class identity’.

But the classes identified here do not have shared interests as against the rest: nobody is ever going to say ‘New affluent workers of the world, unite!’, nor will they ever form a class for itself (Marx’s term for a class conscious of its status and interests, mentioned in the Introduction). And, when all is said and done, an approach which puts dentists in the elite alongside multi-millionaires is missing quite a lot.