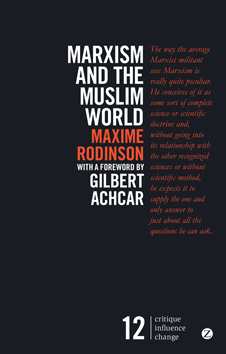 This book is a collection of essays by the French Marxist scholar of Islam and the Middle East, Maxim Rodinson. The essays originate from the 1950s, 60s and 70s, and so are showing their age, but have a certain value in demonstrating concerns and debates within the left at the time. They are also a demonstration of an independent Marxist thinker’s work who is worth reading, even to disagree with.

The central thrust of the essays is the course of de-colonisation in the Middle East from the 1940s onwards. One essay looks back at the twists and turns of the Communist Parties as they followed the instructions of Moscow in the 1930s, shifting and turning on their approach to nationalism and national independence in the Middle East – with an historically interesting note on how this lead to a generally anti-Israeli orientation that prevails among much of the left to this day.

As part of this, much of the work is about an analysis of ideology, which (refreshingly) Rodinson views in practical terms. Ideologies for him are about mobilising and motivating movements, and they include a mythological/utopian element as well as immediate programmatic implications. Significantly, he objects to the term ‘historical materialism’ seeing Marx and Engels’ works as, rather, a rejection of ‘historical idealism’, and this, perhaps, allows him to escape dogmatism and the schematism seen in the French academic Marxism of the period.

He sees in Marxism not so much an idea that will liberate humanity (indeed, he maintains that despite its ‘ideological’ proclamations, Marxist sociology shows us that there will never be a final liberation and a conflict-free harmonious society) but an opening to scientific sociology that will allow us to examine society and better weigh ideologies and their potential effects. ‘Every society and every group, every “class”, even any individual, needs to find an answer to the truly important questions: what is Man in the Universe?’ It is the series of chosen answers to that question and the range of choices it throws up that, for Rodinson, defines an ideology.

Chiefly, he sees nationalism as the chief organising feature of society during the period he was writing, although he notes the inherent dangers of limited nationalism in an interconnected world. When he comes to prescriptions, however, as a leftist, he does suggest that Marxism needs to appropriate the mobilising idea of nationalism and development in the de-colonising world.

In assessing the similarities between Marxism as a mobilising idea, and Islam, he sees them both as movements to realise their own image of a just society. His premise is that ‘we can move away from the idealist conception of religion as a set of ideas floating above earthly realities and constantly animating the spirit and actions of all its followers. We can assume, on the contrary, that all religious ideologies, like all ideologies, have a concrete and real basis in the constantly competing human groups who share out the planet between themselves or form the different strata of society.’ It would be a useful idea for many contemporary politicians to absorb, as they continue to talk about ‘poisonous ideologies’ and seem to suggest they just fall from the sky on susceptible heads.

He notes that there is no constant Islamic culture, and the character of the Middle Eastern region comes from the persistence of human civilisation there, rather than from any Islamic doctrine, indeed, noting that things such as face veils were an accommodation of Islam to existing practices. He notes, ‘there is no such thing as Homo Islamicus. The history of the Muslim world is specific, it has its own style and colour, it is an incomparable part of human diversity.’ He demonstrates how, for examples, Islamic states have permitted lending and borrowing at interest, with barely a murmur from their populations. Indeed, he writes:

‘Hostility towards much-hated innovators, especially foreign ones, often appear in the guise of religious misoneism. I remember a case of a Muslim cemetery in Beirut during the French Mandate; the Beirut Muslims invoked religion in their fierce opposition to and redevelopment of the land. Once independence was achieved, however, the cemetery was soon disposed of and the plot used to build a cinema or some such other building.’

He notes, that although there is a consistent core to Islam, it has changed and adapted throughout the ages, and there is no reason to suppose that it could not cope with the state ownership of the means of production he supported. This core of Islamic values, includes precepts over charitable giving and inheritance that suggests that ultimately, as an idea, Islam must support the idea of private property, and be opposed to socialism as we understand it; but then, the resilience of ideas suggests that it and other religions could, in the end, mutate to accommodate some version of themselves surviving in a world with a socialist majority. Rodinson takes this anti-idealist viewpoint to the extent that he states ‘I have often said that, under present circumstances, purely religious ideology cannot stand in as a mobilizatory ideology.’

Given the rise of the religious Islamic parties in the Middle East, the Muslim Brotherhood, Al-Qaeda and its offsprings, and of course, Islamic State, has his analysis been invalidated?

Of course, just as with the Muslim cemetery Rodinson described, these movements contain distinct elements of nationalism, and anti-colonialism. Al-Qaeda is directed against American hegemony, just as much as it is against the ruling elites of the region.

Rodinson has a refreshing approach to imperialism, rejecting any idea of it as an abstract self-motivating force, preferring to look instead to the direct interests and needs of states, classes and strata who benefit from military expansion, just as he rejects a similar role for any self-motivating abstract Islam. Behind all civilisations, ideologies and movements are people, living daily lives and creating their circumstances. The members of ISIS have brains that are practically identical to that of every other human being. It is their circumstances and the way their lives and minds are created and recreated that leads them to think that the expressed creed of ISIS and its brutality, torture, rape and atrocity is a good idea. Whilst, as Rodinson suggests, Islam (and religion) are not the purely mobilising factor in the Middle East, it’s clear that it has managed to take the role of being at the forefront of the nationalism that he envisaged some form of state capitalism taking.

The important thing that socialists can take from this book is that opening up movements and ideas to close analysis helps sweep away the distortions that led to both talk of ‘war of civilisations’ and its inverse of denying that ISIS have any connexion to a ‘true’ Islam. There is no ‘true’ Islam, there is just the endless variety of ways humans try to interpret their world in order to act in it.

The materialist understanding that changing the way we live will change the ideas is liberating, and it brings to the fore the very idea that the resolution to the conflicts of the Middle East lies in the humans behind the ideas finding a new way to live. Rodinson was incorrect to see some sort nationalism as the answer, instead we need to look to a genuine worldwide movement that offers the prospect of establishing a genuine global community through common ownership of the wealth of the world. He is right in that this will not end all disagreement and conflict. What it will do is enable us to turn any conflicts into democratic arguments among equals, instead of pawns in the service of the owners and shifters of mobile wealth.