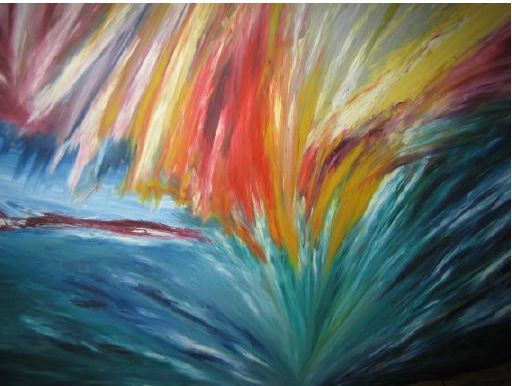 Earlier this year there was an exhibition of paintings by Mary Barnes (1923-2001) at the Nunnery Gallery, Bow in East London. The works came predominantly from the collection of psychiatrist Dr Joseph Berke, who is ‘Boo-Bah’, Mary’s therapist and friend. Mary was an Army Nurse in the Second World War, in 1949 she converted to Roman Catholicism which was a rebellious and unusual step, representing a break from staid and bourgeois Anglicanism. But when she was 29 she was diagnosed as schizophrenic. With her condition seriously deteriorating, in 1963 she read RD  (‘Ronnie’) Laing’s The Divided Self, and contacted and began regular therapy sessions with him.

Laing and fellow psychiatrist David Cooper were heavily influenced by Jean-Paul Sartre’s Marxist Existentialism which was expounded in Search for a Method (1957), and Critique of Dialectical Reason (1960). Sartre aimed for a synthesis of Marxism and Existentialism, seeing Marxism as the dominant philosophy and existentialism as a reinforcing ideology. Sartre proposed Existentialism and Marxism as a possible means of understanding humanity and the world as a totality. Laing and Cooper in their 1964 book Reason and Violence, a Sartrean synopsissaw a combination of a Hegelian-Marxist dialectic with an Existentialist psychoanalysis that incorporates individual responsibility into class relationships, thereby adding a properly Existentialist dimension of moral responsibility to a Marxist emphasis on collective and structural causality. For Laing and Cooper, mental illness was a normal, functioning element of the capitalist world we live in, and that it was in fact a perfectly rational response to an insane world and must therefore be treated as such.

In 1965 Laing, Cooper, and Berke set up the Philadelphia Association at Kingsley Hall in East London, a therapeutic community. One of the first members was Mary Barnes. Laing believed that a breakdown, if allowed to progress without medical intervention, could lead to a more stable state of mind. Thus Mary was encouraged to give in to, and regress to, a state of helpless infancy so that she could grow up again into sanity. She became the patient of ‘Boo-Bah’ Berke, regression therapy and a psycho-dynamic discourse ensued. Mary discovered her gift for painting, and her condition improved. Mary became a cause célèbre, featuring in a June 1968 Sunday Observer article How Mary Barnes grew up again at 42, and held her first solo exhibition in April 1969 at the Camden Arts Centre.

Mary’s canvases are full of vivid colour and often depict religious imagery. Trees shows afigure on a tree in a crucifixion pose while Crucifixion, with its ‘INRI’ is much more explicit. Mary wrote that ‘Ronnie especially liked The Vine, a crucifixion painting of Christ as the vine.’ (Mary Barnes: Two Accounts of a Journey Through Madness Mary Barnes and Joseph Berke 1971) William James in The Varieties of Religious Experience (1902) pointed out that religious emotions may be deranged but are crucial to human life, religious experiences can be irrational but nevertheless are largely positive as after a religious experience the ideas and insights usually remain and are often valued for the rest of the person’s life. Marx identified that ‘Religious suffering is, at one and the same time, the expression of real suffering and a protest against real suffering.’ (Introduction to A Contribution to the Critique of Hegel’s Philosophy of Right) In The Politics of Experience (1967), Laing wrote ‘we are born into a world where alienation awaits us. We are potentially human beings, but are in an alienated state, and this state is not a natural system’ which owed a huge debt to Marx’s writings on alienation in the Economic and Philosophical Manuscripts.

Mary’s Volcanic Eruption: Explosion of IT (1969) is the centrepiece of the exhibition, all primary red, green, yellow, orange, and black colours in seismic flourishes. Mary wrote ‘in December 1965 I had a dream that I think must have been about IT: walking along a road… I saw a man in a dark suit and beret. He reminded me they would soon be testing the bomb.’ The exhibition features her metal trunk with a handwritten note sellotaped to it ‘Mary Barnes Art Work, paintings etc. of mainly Kingsley Hall period 66-70.’ There are photographs of Boo-Bah and Mary at the publication of their book, Mary at a performance of David Edgar’s 1978 play Mary Barnes, and a photograph of Mary in 1990 visiting Sweden where she frequently gave talks to both psychiatrists and patients. This particular photograph shows Mary meeting a patient deemed too dangerous to meet face-to-face.

For the rest of her life Mary showed her work worldwide, usually accompanied by lectures on mental health issues, and the benefits of psychotherapy. According to Laing’s son, ‘Mary became a show-piece for Ronnie’s central theory of the potential healing function of extremely disturbed forms of behaviour.’ (RD Laing: A Biography Adrian Laing 1994) The exhibition epitaph is Mary’s hymn to Berke: ‘Boo-Bah, Ascension Day, Hip-pip Hooray! Joe, I love you with the burning heart of the Sun’ which is testament to the humanism of radical ‘anti-psychiatry’/Existential Marxist psychotherapy.