Book Reviews: ‘The Next Revolution’, ‘The Killing Fields of Inequality’, & ‘Humanity at the Crossroads – A Political and Humanist Dialogue’ 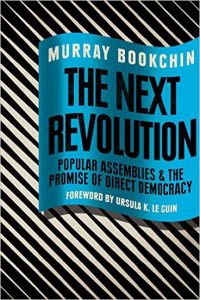 Murray Bookchin was among the strongest of figures to come out of twentieth century American radicalism. As well as being known for the establishment of ‘social ecology’ (a criticism of social problems coupled with ecological concerns) he also developed a political programme known as ‘libertarian municipalism’ which he saw as a method for getting from our present society of minority control and environmental destruction to a new rational and ecological society of mass democratic control.

The basic building block of libertarian municipalism is the community or neighbourhood assembly, face to face meetings where citizens meet to discuss and vote on the issues of the day. These assemblies elect mandated and recallable delegates who then link with other assemblies forming a confederated council, a ‘community of communities’. The difference between this form of delegate democracy and our current form of representative democracy is that in a representative democracy power is given wholesale to the representative who then is free to act on their own initiative; in a delegate democracy the initiative is set by the electing body and the delegate can be recalled at any time should the electing body feel that their mandate is not being met, thus power remains at the base.

Bookchin saw the setting up of such assemblies as a task that could be initiated now, even if the only functions they could have initially were moral ones. He also saw that, as a means for extending the democratic legitimacy and for the further confederalisation of these bodies, it would be necessary to elect town and city councillors sympathetic to the cause. This position eventually led to Bookchin making a break with his previously held anarchism. Bookchin criticised the anarchists for holding a false theory on the nature of power. Instead of seeking to abolish power, which Bookchin thought was impossible as it is always a feature of political and social life, the purpose of an emancipatory politics should be to ensure that power is in the hands of masses and is dispersed equally among them. Bookchin used the classic example of Barcelona in July 1936 to illustrate this point. The defeat of the military coup meant that the CNT (an anarcho-syndicalist union) and its armed militias were now the only real power in the city. Despite this, and because of their anarchist ideology, the CNT refused to enter the government and to exercise the political power that they already had, thus leaving the door open for the eventual Stalinist take over. By refusing to take power, Bookchin argues, the anarchists did not destroy power but merely transferred it into the hands of their enemies. While the CNT did hold power in the factories and workplaces a vast swathe of real governmental power, from the administration of military affairs and the overseeing of justice, was left in control of the liberals and Stalinists who would later use this power to reverse the gains of the July victory.

Through the gradual building up of the power and spread of assemblies Bookchin hoped that libertarian municipalism could lead to a situation of dual power where the authority of the assemblies would eventually challenge that of the state. This brings us to our criticisms. Bookchin held that there was a distinction between the statecraft of professional politicians as the administrators of the governmental machine and politics proper as practised by free citizens engaging in the direct democracy of their self-managed communities. Whilst this distinction may be fair to a certain extent the practical conclusions that Bookchin drew from this do not seem to be very cogent. Bookchin thought that, in order to avoid becoming agents of the state, councillors standing in favour of libertarian municipalism should only stand for posts in local elections. If the majority of the population were in favour of libertarian municipalism then they would be able to use their votes to elect delegates at all levels of the state and so realise their programme that way. Failure to exercise political power at all levels would have the result of handing power to their opponents. Despite his criticism Bookchin repeats the mistake of the Spanish anarchists.

Moreover, Bookchin thought that councillors favourable to libertarian municipalism should stand on a typical reformist programme with its ‘minimal’ and ‘maximum’ demands. We would hold that it is this, rather than the supposed principle of ‘power corrupts’, that led to the ‘revolutionary’ parties of the past degenerating into nothing more than mere administrators of the existing order. Once elected on a platform of short term reforms it is these that come to take precedence over any ‘maximum’ long term revolutionary goals which fade away permanently into the background. In order to stay in power the party has to appease those who voted it in on a reformist platform.

In recent years the ideas of Bookchin have found an unlikely testing ground in Rojova, a semi-autonomous Kurdish area in north eastern Syria. Abdullah Öcalan, a former Leninist and imprisoned leader of the PKK, came across the works of Bookchin whilst in prison and saw their potential for organising the Kurds, a people without a state.

As an introduction to Bookchin’s thought this book is not a bad place to start but as this is a collection of articles republished from various sources there is a certain amount of repetition of ideas and themes. Despite some significant differences there is much that the Socialist Party would agree with and find of use.

‘The Killing Fields of Inequality’, by Göran Therborn. Polity £14.99.

Yet another book on inequality and its consequences? Yes, and one that contains a lot of statistics but that also has some new points to make about the types of inequality and their impacts on people’s lives.

Therborn distinguishes three kinds of inequality. The first is vital inequality, dealing with people’s life chances (life expectancy, likelihood of years without serious illness, etc). The second is existential inequality, referring to people’s autonomy, dignity and freedom (thus covering any discrimination on the grounds of gender, sexuality, ethnicity and so on). Lastly is resource inequality, primarily a person’s wealth and income but also including the support they receive from their parents.

As this suggests, one of the book’s strengths is its emphasis on inequalities other than those of income and wealth. Therborn argues that what should be aimed at is ‘equality of capability to function fully as a human being’ (taken from the writings of Amartya Sen) and ‘the rights of all children to a good enabling childhood’. As the book’s title suggests, vital inequality is an important aspect of this, and in Ukraine, for instance, life expectancy is three years less for men than it was in 1990. In London among many other places, your lifespan depends to a large extent on how well-off you are. In general, lack of control over your life is bad for your health: the poorer you are, you are not just likely to die younger but to suffer more years of ill health.

As for existential inequality, discrimination on the grounds of gender is decreasing but still exists and is sometimes quite extreme (in South Asia, for instance). Therborn argues that existential equalisation is a non-zero-sum game: if women or gay people are in general subject to less prejudice or oppression, it does not by itself affect the lifestyles of the privileged. In contrast, resource equalisation is zero-sum: if the share of the poorest in the world’s wealth increases, that of the elite will decrease. Hence the rise in resource inequality in recent years, with countries such as Brazil and South Africa being the most unequal. And it was recently reported that there are more billionaires in China than in the US.

But, as so often in books along these lines, it is in the last couple of chapters that the author disappoints. Therborn accepts that capitalism will be around ‘for the foreseeable future’, and he appeals to the middle class (vaguely characterised as the non-rich and non-poor) to align with the poor. This way they can combat both the suffering of the poorest and the exclusivism of the oligarchs, leading to ‘an egalitarian enlightened society’. But he gives no reason to believe that egalitarian capitalism is possible.

‘Humanity at the Crossroads: A Political and Humanist Dialogue’, by Raymond Garbet. Newton Books. Edinburgh, 2015. 260 pages.

This is a self-published book by a long-term member of the old Communist Party of Great Britain who is now a member of the pro-independence Scottish Green Party and so shares the illusion that an independent Scottish government would be able to buck the economic laws of capitalism and put people before profits.

He is also a member of the Humanists (hence the book’s sub-title). As such he rejects religion (which he defines as any belief in the exist of a ‘soul’) but doesn’t call himself an atheist because that is saying what you are against not what you are for, preferring ‘Secular Humanist’; which is fair enough. Basically, he sees the way forward for humanity as the UN taking action to deal with climate change, world poverty and human rights abuses; a worthy internationalist perspective but another illusion to expect that collection of capitalist states to do anything about any of these.

If you buy the book you get a Trotskyist pamphlet thrown in free as he has a 20-page interview with Colin Fox, ex-MSP and leading member of the Scottish Socialist Party (which Garbet annoyingly refers to as the Socialist Party) and representative within it of the old Militant Tendency. The trouble is that it is outdated as Fox puts his group’s pre-Corbyn line that the Labour Party is finished and so for the need for a new union-based workers party, stressing ‘the enormous obstacles that exist in reclaiming the Labour Party as Jeremy Corbyn has been attempting for years.’ But, to be honest, we didn’t see it coming either, not that it makes any fundamental difference. That Fox is no socialist is summed up in his last word: ‘we want to create a society where everyone receives a decent wage.’