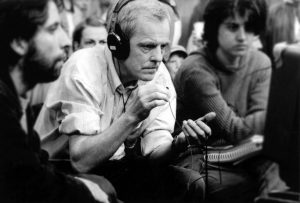 In the second part of our study of the work of Peter Watkins, we look at how his career as an independent film-maker challenged conventional trends.

Frustrated by the poor reception to Privilege, Watkins left Britain for Sweden to make his next film. The Gladiators (1969) continued the theme of the elite using the media to divert aggression, but instead of music, as in Privilege, here violence is the catalyst. Soldiers representing different states are sent to arenas to fight and compete against each other in missions. These ‘Peace Games’ are televised to massive international audiences. From the comfort of a country mansion, the generals of each side sit together watching the battles and amiably take turns to influence what their soldiers do. One of the strongest messages in The Gladiators is that soldiers of any side have more in common with each other than they do with their leaders.

By the start of the 1970s, Watkins had relocated to America, where tensions between the state and the radical political scene were focused on the Vietnam War, the Kent State shootings, and threats to ‘civil rights’. Watkins’ response was to adapt the setting of The Gladiators – a remote arena run by the military – to create a scenario where the views of those disaffected and at risk from the state could be expressed.

Punishment Park (1971) followed two groups of militants – civil rights activists, poets, protest singers and draft-dodgers – held by the American police under the 1950 McCarran Act. This piece of real-life legislation allowed the government to detain people expected to cause subversion. Some of the characters were loosely based on those involved in the ‘Chicago Trials’ which followed countercultural protests at the 1968 Democratic National Convention in Chicago. One of the sets of militants is on trial from a nationalist tribunal already sure of their guilt. The other prisoners have been sentenced, and have chosen to spend three days in ‘punishment park’ instead of lengthy prison stays. This is a torturous trek through 53 miles of desert, to reach an American flag within three days while being hunted by trigger-happy cops.

The drama was improvised by non-professional actors, mostly giving their own views in character, whether playing activists, police or draft-board judges. This approach gives the film a raw authenticity which led some viewers to assume that it depicts real events. From this point in his career, Watkins’s films would feature only non-professional actors, often improvising their dialogue.

Punishment Park received mixed reviews, variously describing it as a ‘chilling prognosis’, ‘hypnotically gripping, and ‘the pornography of hate’ (pwatkins.mnsi.net/punishment.htm). Most film distributors decided that it would be too volatile to screen, and consequently it was denied the impact it deserved.

Watkins’ next film, released in 1974, was a biopic of Norwegian expressionist artist Edvard Munch. He first discovered Munch’s work only a few years before, and felt that the marginalisation of his own work echoed Munch’s experiences. The anger of his earlier films is more measured, targeted against repression rather than oppression. Munch’s life and work was shaped by the strict social norms of the late 19th Century, as well as a constant threat of illness. The pace is more sedate than in Watkins’ previous films, gradually building up a layered picture of what influenced Munch.

Watkins’ films acknowledge the presence of the camera crew, especially in Punishment Park where they influence events, and even when this would be impossible within the drama, as in Edvard Munch and Culloden. His intention here was to remind the viewer that film-makers don’t objectively and passively record events, but interpret them according to their own agendas. Watkins himself ‘appears’ in his films as a narrator.

Through the rest of the 1970s and 1980s, Watkins remained in Scandinavia, where he developed his theory of the ‘Monoform’ and produced films to counter its approach. The Monoform is the standard style of editing and directing films and television programmes, which only presents the film-maker’s capitalist ideology, and stifles alternative interpretations. His films in this period studied ‘modern stress’ among Danish families (The Seventies People, 1974), radioactive waste produced by consumerism (The Trap, 1975), protests against nuclear submarines (Evening Land, 1976), and public awareness of the threat of nuclear war (The Journey, 1987). As always, reviews and reactions were largely hostile, coming from those who supported the oppressive society which Watkins was attacking.

In the early 1990s, Watkins worked with students at the Nordens Folk High School in Sweden on a biopic of radical writer August Strindberg. The Freethinker ‘has a complex internal structure, and moves in an unpredictable and seemingly random way between’ different points in Strindberg’s life, offering ‘the audience an open-ended process allowing for individual and varied reaction’ (pwatkins.mnsi.net/freethinker.htm).

His 1999 film La Commune (de Paris, 1871) is political cinema at its best, and here Watkins attempts to counter the Monoform. Watkins identified that ‘the Paris Commune has always been severely marginalised by the French education system, perhaps because it is a key event in the history of the European working class.’

Watkins shot the film in black and white using digital video cameras in 13 days in an abandoned factory on the eastern edge of Paris in July 1999. There were over 220 people in the cast with approximately 60 percent of them having no prior acting experience.

In an effort to counter the Monoform, Watkins engaged in a democratic / collective experience during the filming; his overall objective was to present a collective voice, while the cast was involved in the film’s preparation, and during the filming itself. Watkins rarely has the cast framed in close-up as individuals, usually there are at least two or three people in the frame at the same time thus allowing a group dynamic to develop. The cast step out of their roles from time to time to discuss the situation in 1999, and its links to the events of the Paris Commune, contributing to the telling of their own history, and bringing out the modernity of the Commune. They would also discuss what they would say, how they might feel, and how they would react to the events of the Commune which were about to be filmed, externalising their true personalities and becoming the men and women of 1871.

Watkins brings the class struggle to the screen in his film of an attempt to create a better world. The Commune is not seen as a failure but the beginning of an idea of solidarity amongst people; he celebrates the Commune but its errors and its weaknesses are not hidden. The 375 minutes length of La Commune which runs counter to the Monoform ensured its complete marginalisation.

After La Commune, Watkins concluded ‘We are now moving through a very bleak period in human history… , sheer greed engendered by the consumer society sweeping many people under its wing, human, economic and environmental catastrophe in the form of globalisation … have synergistically created a world where ethics, morality, human collectivity, and commitment … are considered “old fashioned”… In such a world as this, what happened in Paris in the spring of 1871 represented (and still represents) the idea of commitment to a struggle for a better world, and of the need for some form of collective social Utopia.’ He felt that La Commune should be seen as a tool for others to use in challenging the dominance of the ‘Mass Audio Visual Media’ (MAVM) industry.

Watkins sees direct links between the hierarchy and centralisation of the contemporary manipulative role of the MAVM and the globalisation of capitalism.  He sees the rationale for the internal lengths and structures of the ‘Universal Clock’ (timing TV programmes according to adverts) as entirely commercial; they contribute to a loss of history, the increase of hierarchical forces, and the passive acceptance of global capitalism. Watkins speaks of ‘exploitative, morally corrupt free-market ideology sweeping aside everything before it.’ In his view, the ‘anti-globalisation movement’ won’t reach its full potential unless it challenges the MAVM.

Watkins published his theories as The Media Crisis (2004), a passionate critique of the Monoform and the lack of debate around the production of new audio visual media forms. His rejection of the dominant Monoform style, and his objections to the oppressive media industry which pushes it, has led to most of his films being marginalised and neglected. Consequently, his work hasn’t had the exposure or influence it deserves. Despite this, his approach is echoed in films such as the critically acclaimed holocaust documentary film Shoah (1985) by Claude Lanzmann, which may be seen as counter to the Monoform. Shoah was 11 years in production and editing and released at a length of 613 minutes! Lanzmann used no historical footage, arranged many of the scenes, but not the testimony; the film was made without subtitles, voiceovers, questions and answers were kept on the soundtrack, along with the interpreters. Lanzmann matches the testimony to places, and the audience is encouraged to think about the historical actions of these men, but also the ethics of reflection.

With filming and editing technology now affordable to more people, and the internet as a means to distribute films without going through corporations with their own agendas, there is now more potential for people to produce films which express their own experiences and views.

Watkins should be recognised more among socialists not only for his critique of the power of the media, but also in suggesting a positive alternative style of film-making: docudramas largely improvised by non-professional actors, and a new way of organising society in opposition to global capitalism. His films concerning history, war, pop culture, the oppressive role of the state in capitalism, late 1960s radicalism, the Paris Commune, and the role of artists, are always relevant to socialists.