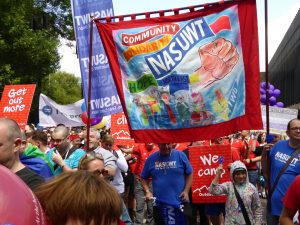 In July the government published details of its Trade Union Bill which is expected to have its second reading in the House of Commons in September or October. The Bill contains wide-ranging measures designed to restrict the organised working class acting collectively and taking industrial action.

The main proposals are thresholds for turnouts in strike ballots, restrictions on the right to picket and the removal of the ban on the use of agency workers to replace striking workers. The government is also extending the role and powers of the Certification Officer who is responsible for regulating trade unions, including providing this official with a new power to impose financial penalties on unions.

Industrial action, including strike action, will only be lawful if there is a minimum 50 percent turnout amongst trade union members who are entitled to vote, 40 percent of those who were balloted must vote in favour of industrial action. In addition, the Bill lays down that abstentions should be treated as ‘no’ votes for industrial action; which contravenes the policy of the International Labour Organisation which states that only votes cast should be taken into account. The 40 percent yes vote requirement would apply to four ‘essential public services’: health, the fire service, transport and education. This is in fact far more wide-ranging than it appears at first glance as transport services include roads, rail, aviation, maritime, border security and Transport for London (i.e. London Underground). There will be time limits for strike mandates which will reduce the momentum in union campaigns, reducing or removing trade unions’ rights to facility time, specific and bureaucratic requirements for picket lines, the introduction of new criminal offences and sanctions for picketing although unlawful picketing is already regulated by both civil and criminal law.

The removal of the ban on agency workers to replace striking workers (a ban in place since 1973) will permit employers to use ‘scab’ labour to break strikes. This is manna from heaven for the capitalist class. Jack London, author of The War of the Classes wrote ‘after God had finished the rattlesnake, the toad, and the vampire, he had some awful substance left with which he made a scab. A scab is a two-legged animal with a corkscrew soul, a water brain, a combination backbone of jelly and glue. Where others have hearts, he carries a tumour of rotten principles. When a scab comes down the street, men turn their backs and Angels weep in Heaven, and the Devil shuts the gates of hell to keep him out’ (The Scab).

Frances O’Grady, the TUC general secretary, responded that ‘the government’s proposals on union ballots will make legal strikes close to impossible. Union negotiators will be left with no more power than Oliver Twist when he asked for more. After five years of falling living standards the prospects for decent pay rises have just got a whole lot worse’ (Guardian 12 May).

The new Trade Union Bill follows the capitalist class onslaught on the organised working class in the 1980s and 90s. Alan Budd, the economic adviser to Thatcher has said ‘raising unemployment was an extremely desirable way of reducing the strength of the working classes – if you like, that what was engineered there in Marxist terms was a crisis of capitalism which recreated a reserve army of labour and has allowed the capitalists to make high profits ever since’ (Guardian 23 April 2012). In the 1980s and 90s a series of trade union laws were introduced that removed immunities in industrial action, imposed restrictions on the right to picket, increased legal interference into the internal affairs of the unions, the closed shop was made unlawful and the definition of a dispute was narrowed, including restricting industrial action to disputes between workers and their own employer, thus outlawing solidarity action.

The current capitalist crisis and recession has seen production cut back and large numbers of workers lose their jobs, and as a result of high unemployment and job insecurity trade unions become less effective as bargaining organisations, meaning that laws restricting trade unions are easier to implement. Keith Ewing, President of the Campaign for Trade Union Freedom said in May there had been a ‘shocking decline in collective bargaining with just 20% of workers covered by an agreement, compared with 82% in the 1970s. In 1978 I was one of 13 million trade unionists and I am now one of only 6 million. Our collective bargaining structures are collapsing’ (Morning Star 14 May).

All this presents the working class with a problem in maintaining real wages. A pay increase which does not keep up with the cost of living represents a fall in ‘real wages’. The capitalist class know this and will exploit it to their own benefit. Marx pointed out that ‘the general tendency of capitalist production is not to raise, but to sink the average standard of wages’ (Value, Price and Profit). It should be remembered that wages can never, for long, rise above the level which allows the employers to make a profit. The times when the workers can hope to gain an improvement are when the capitalists are doing well, expanding production and accumulating capital. The most successful strike is the one that never happens because when trade is brisk employers may yield to the mere threat of a strike interrupting production and profits.

The wage which the working class receive is the price of their labour-power and the price of this commodity fluctuates, like that of all commodities, around its value as determined by the amount of socially-necessary labour incorporated in it. If competition between the working class for jobs was unrestricted then wages would tend to fall below the value of labour-power, as often happened in the 19th century before effective trade unions existed. Combining together in unions to exert collective pressure on employers is a way the working class can prevent their wages falling below the value of their labour-power and below the subsistence level. To resist the intensity of exploitation and to maintain real wages against inflation workers will have no choice but to struggle for higher wages even if this means using the strike weapon. The strike, during an economic depression, though, is a blunt instrument to wield. It is difficult to use the strike to gain more pay when production is being curtailed, workers being laid off and the business facing bankruptcy.

Trade unions, then, are defensive organisations of the working class against what Marx called ‘the never-ceasing encroachments of capital’ but they cannot stop the exploitation of the working class. This exploitation is inherent in the wages system and can only be abolished along with it through the conversion of the means of production into common ownership under the democratic control of the whole community.

As Marx wrote: ‘at the same time, and quite apart from the general servitude involved in the wages system, the working class ought not to exaggerate to themselves the ultimate working of these everyday struggles. They ought not to forget that they are fighting with effects, but not with the causes of those effects; that they are retarding the downward movement, but not changing its direction; that they are applying palliatives, not curing the malady. They ought, therefore, not to be exclusively absorbed in these unavoidable guerrilla fights incessantly springing up from the never ceasing encroachments of capital or changes of the market. They ought to understand that, with all the miseries it imposes upon them, the present system simultaneously engenders the material conditions and the social forms necessary for an economical reconstruction of society. Instead of the conservative motto: ‘A fair day’s wage for a fair day’s work!’ they ought to inscribe on their banner the revolutionary watchword: ‘Abolition of the wages system!’ (Value, Price and Profit).

As socialists, we stand with our fellow working class in their necessary battles to defend themselves, but we point out at all times that the real victory to be achieved is the abolition of the wages system.