Book Reviews: ‘Postcapitalism – A Guide to Our Future’, & ‘The Deluge: the Great War and the Remaking of Global Order’

‘Postcapitalism. A Guide to Our Future’, by Paul Mason. Allen Lane. 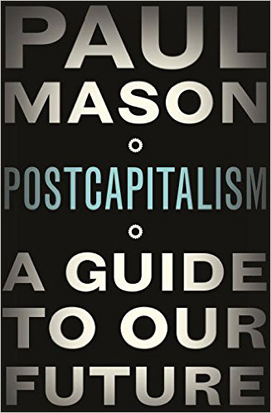 In his new book Channel 4 journalist and one-time Trotskyist Paul Mason begins by explaining the periodic growth and contraction of the capitalist economy by Kondratieff wave theory.

Kondratieff waves are named after the Soviet-era Russian economist (shot under Stalin) who imagined a 50-year periodicity in capitalist economic activity, and who then concluded that each economic cycle reflected the advent, adoption, flourishing and demise of its age’s defining technology.

Scientifically, one would seek to explain Kondratieff’s apparent wave phenomena in Marxian terms, i.e. in terms of the social system’s essence – capital— but such attempts have so far failed to convince and this intriguing problem for Marxian theory remains unresolved.

However, for the purposes of Paul Mason’s argument, capitalist society has now started to ride the information technology Kondratieff wave. For him, information technology is the surfboard that took us out to the wave and, once we master it, it will be the surfboard that rescues us from the capitalist depths and carries us to the post-capitalist shore. Our ride will take one Kondratieff period of 50 years.

So what characterises the Kondratieff IT wave which Mason says we are now on?

The IT wave has already established its essential characteristics through the emergence of free Open Source software, free creative commons internet resources, free Wikipedia collaboration, etc. The IT wave’s free goods are premised on the assumption that IT development and IT maintenance require a vanishing amount of human labour, and that consequently IT software products and IT firmware-based technology possess a vanishing marginal cost (i.e. can be replicated for everybody for free). And IT technology will invade everything we produce.

His argument is that this characteristic invariant of the IT wave — free technology and its technology-based products — is totally subversive of capitalism, since the indispensable compulsion for a capitalist ruling class to withhold ownership and control of the means of production from the working class, thereby forcing the working class to work on its terms, will no longer serve its capitalist purpose once everything is free. The means of production might just as well be owned by everyone or by no-one.

That, in a nutshell, is his argument. IT will issue us into an Age of Abundance — the necessary precondition for postcapitalism to succeed. Postcapitalism will be characterised by renewable energy, neutral carbon, zero socially necessary labour time, and zero marginal cost.

So far, so good, up to a point. Some interesting socialist (in our sense) arguments, entertainingly and intelligently told, including a good description of the labour theory of value, a good discussion of the economic calculation pseudo-problem, etc.

But Mason’s argument is tainted by his apology for gradualism and his reformist transitional plan.

If this seems an unnecessarily harsh judgment, judge for yourself from the legislation, and the prevailing capitalist social relations under which it is to be promulgated, that he wants ‘a government that embraced postcapitalism’ to pass while on its IT Kondratieff wave.

Here is his list of some of his transitional reforms outlined in his final chapter as ‘Project Zero’: Suppress market forces for energy. Suppress or ‘socialise’ all monopolies. Pay everyone a basic income. Regulate the rate of profit. Enforce profits to be ploughed back into ‘social justice.’ Make WiFi free to break up the telecom monopolies. Cheapen the cost of basic necessities. Produce more stuff for free. Sell water, energy, housing, transport, healthcare, telecommunications and education at cost price. Shrink (national and personal) debt. Reduce the time for holding patent and intellectual property rights, e.g. 25 years. Increase the use of creative commons copyright. Incentivise investment in renewables. Support local power grids. Elect bank bosses democratically, and scrutinise their financial behaviour. Track down and suppress all off-shore trading. Make it unethical for a chartered accountant to propose a tax avoidance scheme. Issue fiat money to kill neoliberalism. Increase the velocity of circulation of money to ‘tame’ speculation. Set a high inflation rate to stimulate sustainable growth, etc. etc.

His laudable aim is to promote the transition to a non-market economy of abundance where goods and services are free, but his long transition period turns out to be a fantasy hybrid world, an illusory economy in which markets, profits and banks exist alongside a growing non-market, non-profit, non-money-based sector.

‘The Deluge: the Great War and the Remaking of Global Order’, by Adam Tooze. Penguin £12.99 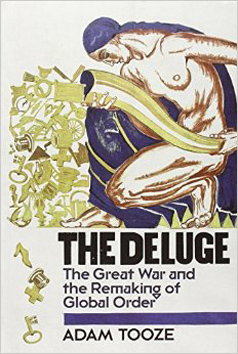 Which side won the First World War? The straightforward answer is that it was the Entente – Britain, France, etc – that prevailed over the Central Powers, mainly Germany and Austria-Hungary. But, as Tooze shows here, it was rather more complicated than that, and the true victors were the United States and, to a considerably lesser extent, Japan. We should add the kind of provision that he does not make, that it was the ruling class in these countries that really won.

The lengthy fighting, with its incredible costs in material and its disruption to industry and agriculture, had greatly weakened the major European powers, with even the ‘winners’ owing vast sums to the US. In 1923 the British government agreed to repay $4.6bn to the US, with interest, over 62 years. Most of the reparations paid by Germany to Britain and France in fact ended up being passed to the US.

It can be said that the real end of the war came, not with the Versailles Treaty, but with the Washington Naval Conference of 1921–2; holding it in the US was itself symbolic. There Britain in effect conceded naval and hence global power to the US, Japan was allowed a Pacific fleet, and other countries were relegated to the status of minor players in terms of their navies. In 1928 a British Foreign Office memo recognised the new situation: ‘Great Britain is faced in the United States of America with a phenomenon for which there is no parallel in our modern history – a state twenty-five times as large, five times as wealthy, three times as populous, twice as ambitious, almost invulnerable, and at least our equal in prosperity, vital energy, technical equipment, and industrial science.’ Even the fact that the US did not join the League of Nations gave it a kind of veto over the decisions of the major players who were in the League.

Not that the American ruling class had it all its own way, even in its own backyard. There were widespread strikes in 1919, often opposed violently by the employers. At US Steel, twenty workers were killed before the company won a comprehensive victory in January 1920. Immigration was drastically cut, and a ‘Red Scare’ led to many non-US-born labour activists being deported. All this was, says Tooze, ‘a shock from which the American labour movement was never to recover.’

Moreover, the official end of the war by no means meant anything approaching peace. From the Amritsar Massacre of 1919 and the French invasion of the Ruhr in 1923 to the British military defence of Shanghai in 1927 and other examples, fighting and preparations for fighting continued right down to the bloodbaths of the thirties. The outcome of the Great War was not Peace without Victory, as trumpeted by US President Wilson, but Victory without Peace.