My Election Contest With Jeremy Corbyn 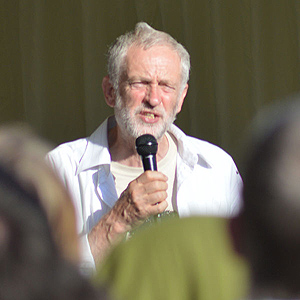 Our candidate who stood against Jeremy Corbyn in Islington North at the general election looks at his politics.

After seeing off the challenge of the Socialist Party at the general election, Jeremy Corbyn clearly feels himself invincible, taking on all -comers and challenging for the leadership of the Labour Party. To some he is the left-wing rejuvenator of true Labour values; for others, he is the lunatic left and ultimate Islington socialist.

Often at hustings in previous elections, I had found myself clearly more radical than the cautious Labour candidate, as they tried to control expectations, and put forward achievable demands. Against Jeremy Corbyn (along with a fairly radical Green candidate, and a Tory smart enough to talk to the needs of the constituency), this wasn’t the case. It would often depend on who got their turn in first, to put a radical anti-capitalist analysis of the problems of health care, housing, mental health or education.

One event illustrates this neatly. We were asked for a song that epitomised our campaign. After deciding that my own preference, Slayer’s ‘War Ensemble’, wouldn’t quite cover it, I fell back on what I knew would be most Socialist Party member’s preference: John Lennon’s ‘Imagine’. As it happened, I was asked before Corbyn was, and he would have chosen the same song.

Throughout the campaign, people asked me why we were standing against Jeremy Corbyn, since ‘he is a socialist.’ I wrote a letter to the local press, pointing out that whatever he stood for, he would still a member of a party that explicitly supports capitalism. The last sentence, that a vote for Corbyn was a vote for poverty and unemployment was mysteriously excised by the paper (surely not for reasons of space). I noted several times that despite his opposition to nuclear weapons, and the fact that he would vote against it, a vote for him would (in effect) be a vote for a Labour Prime Minister committed to replacing Trident.

He clearly takes some pride in his rebellious voting record. Normally, as befits a comfortable incumbent who is certain to win, he was able to shrug off my barbs and jibes (indeed, he affably accepted that our campaign was happening and never himself asked why we were standing against him). When, however, I mentioned our Party’s democratic policy of binding mandates for delegates, he took umbrage at the idea of MPs voting as instructed. The fact that his party is not itself democratically organised does at least excuse his position.

He is certainly a passionate advocate of the needs of the poor: throughout the campaign he would come back to the notion that children should have warm dry beds to sleep in; he raised the issue of the horrific drowning of economic migrants in the Mediterranean (instead of merely focusing on local bread and butter issues); he linked mental health issues of poverty and exploitation. It was clear he knew his patch well, and, again, gazumped me by rattling off the same facts about Islington that I’d spent my time researching and learning. The problem, though, is not his analysis of the problems of capitalism, but his approach to trying to resolve them.

An example: at one hustings a very local matter came up. It was a detailed and specific question about the renovation of a council estate in Islington, and the apparent withdrawal of councillors from liaison with the tenants and their proposed designs. I hadn’t heard of the matter, even in the local press, and didn’t know the facts. My cold reading of the matter was that it was probably down to public administration law, and the nature of state property as private property of the council. Corbyn, who mercifully answered before me on this one, confirmed as much, noting that the tenants’ interests had to be balanced against the overall needs of Islington’s property estate.

When it comes down to it, he is better described as a statist, rather than a socialist (in our terms). He believes in state action: laws to reduce knife crime; public ownership of the NHS rather than private ownership; controls on rents and security of tenancy; expansion of council housing, etc.. He confirmed as much after the election, describing the Miliband manifesto as ‘basically good’. Indeed, a look at his Labour leadership campaign manifesto shows that he is far from being the frothing radical the right-wing press love to depict him as. In his response to Osborne’s July budget, he wrote: ‘I am calling for a people’s quantitative easing – and asking my fellow candidates to join me in that call… The Bank of England must be given a new mandate to upgrade our economy to invest in new large scale housing, energy, transport and digital projects.’ Put another way: his leadership would be just Harold Wilson warmed up.

The real source of his radical image is his persistent stance on foreign policy. First, backing dialogue with Sinn Fein back in the 1980’s, and nowadays being at the forefront of campaigns for the Palestinians. Indeed, one clear point of attack from some within the Labour Party has been the meeting he addressed where he welcomes ‘our friends’ from Hamas and Hezbollah. When questioned about that on Channel Four news, his response was to aggressively pushback, and try and get the issue back to resolving the Israel Palestine conflict. There’s no doubt that he is a passionate advocate for peace, but also, clearly, a practical politician willing to work with the existing ruling groups, but he is clearly in hock to the dismal ideology of nationalism and national liberation.

The right wing press has gone mad over him. Some Tories, taking advantage of the Labour Party’s new open primary system of electing a leader, where anyone can pay three pounds to become a ‘Labour supporter’ (and sign a declaration that they are not a supporter of any other party) and get to vote, gleefully announced that they would join up and vote for Corbyn, because he will take the Labour Party into the wilderness for decades to come. The reality, perception aside, is that Corbyn is simply a traditional Labour MP, who puts forward the case for state intervention in a capitalist economy. The only thing he does differently, is that he believes in putting the case openly, instead of pitching to a marketing strategy in order to win power to make reforms on the quiet.

He is a decent, intelligent and committed politician, but he wouldn’t have survived in politics so long without a certain amount of steel. If he surprises everyone by winning the leadership, he could surprise the gloating smooth-faced Tory mockers by actually winning a general election. The biggest, surprise, though, would be just what a staid, unradical government it would be in reality. There would be noise, but the detail is clear, he would have to work within the possibilities of capitalism and its overall profitability. We’ve seen it before in the 1960s.

If he does triumph in the leadership election it will be because the process of installing increasingly sophisticated party and electorate management policies by the Labour leadership have run out of steam, and the desires of workers (however misinformed and locked into the logic of markets) will have forced their way into the halls of power. The media and party managers cannot paper over the lived experience of millions in this country who feel they have no voice nor control.

If he does become Prime Minister, I’ll be telling people it’s all my fault, until then, I’ll continue doing my best to stop him.