Book Reviews: ‘The Establishment: and How They Get Away With It’, & ‘Leon Trotsky’

‘The Establishment: and How They Get Away With It’, by Owen Jones. Penguin £8.99 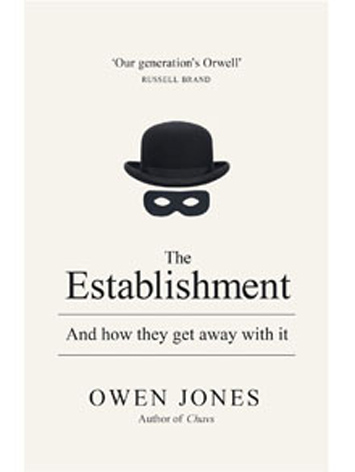 The Establishment, according to Owen Jones, consists of politicians, media barons, businesses, financiers and the police. They ‘manage’ democracy to ensure that it does not damage their interests. The Conservatives are its most natural political representatives, and the Labour Party in effect accepts the Tories’ main ideas. The Establishment shares mentalities but is not any kind of organised conspiracy. Its basic ideology is that of free markets and neo-liberalism, yet it is in fact completely dependent on the state.

Jones provides myriad examples of the connections among the different members of the Establishment. The mainstream media, for instance, are controlled by a small group of very powerful individuals, and the press and TV provide consistently misleading coverage, which often leads to people having absurdly exaggerated ideas about, say, the extent of social security fraud. Slightly awkward MPs such as Tom Watson and Chris Bryant have been subject to nasty personal attacks and may be put under covert surveillance. The BBC too is ‘a mouthpiece for the Establishment’, presenting the free-market view as an apolitical stance.

While benefit claimants are attacked in the press and people who are seriously ill are assessed by the likes of Atos as capable of working, there is a whole industry devoted to reducing the tax paid by the rich and the companies they own. Big accountancy firms such as Ernst & Young help design laws on tax avoidance and then advise clients on how to get round them. They have played a part in the increased concentration of wealth at the very top of the social pyramid.

The police, however, occupy a somewhat precarious place in the Establishment. They were needed to defeat the unions in the 1980s, especially the Miners’ Strike, and Thatcher’s government gave them a big pay rise. The police PR machine became very friendly with newspaper editors. But, with the Establishment now feeling more firmly in control, the police themselves have been subject to cuts and privatisation: in November 2012 thousands of police officers marched in London in protest against cuts.

Despite all the propaganda about free markets and freeing society from the dead hand of the state, the Establishment relies on the state machine to defend its interests. This covers not just bank bailouts but also the provision of infrastructure, support for research and development, the protection of property, and subsidies to companies via benefits for the low-paid. Organisations such as the Adam Smith Institute have succeeded in setting the framework for political debate, with anything slightly at odds with their ideas seen as completely beyond the pale. It is really only on the subject of the EU that the Establishment shows a divergence of views.

Jones gives a well-researched guide to all this and much else besides, which makes the milk-and-water nature of his own proposals all the more disappointing. In the foreword he describes the Green Party’s policies as ‘a genuine assault on the Establishment’ and in his conclusion he calls for a ‘democratic revolution’. But all this consists of is nationalisation, attacking tax avoidance, increasing the minimum wage and controlling private-sector rents. This might lead to some redistribution of wealth, but it will not truly disturb the status quo.

Yet another hagiography but what’s the point? Only Trotskyists are interested in Trotsky these days and they know his life by heart.

Trotsky was a political failure and left a dubious political legacy. Apart from scores of squabbling Trotskyist sects, there’s the justification for reformist practice called ‘transitional demands’.  His History of the Russian Revolution is worth a read as written by somehow who played a prominent part in it. As is The Revolution Betrayed which, though mistakenly identifying Russia as a ‘degenerate workers state’ with an economy superior to capitalism because of its nationalisation and planning, at least initiated discussions on ‘the nature of the USSR’ which led to some of his followers realising that it was a class-ruled society and even state capitalism, even if he himself never did.

Le Blanc, a Trotskyist himself, is one of those who have been trying to paint Lenin as an orthodox leftwing Marxist operating in the specific conditions of Tsarist Russia rather than as the originator of a quite different theory and practice, Leninism. He claims the same for Trotsky but says virtually nothing in his book of Trotsky’s ideas and activities up to 1917 before he became a Bolshevik and which might have given some plausibility to this view.