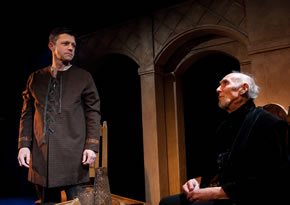 Heresy by Tilo Ulbricht, performed at the Tabard theatre in Chiswick, London, last year, is based on The Grand Inquisitor chapter in the Dostoyevsky novel The Brothers Karamazov. Ulbricht’s play is set in sixteenth century Spain ‘during the most terrible time of the Inquisition, when fires were lighted every day throughout the land to the glory of God and in the splendid autos-da-fé wicked heretics were burnt by the Cardinal, the Grand Inquisitor’ (Dostoyevsky).

Catholic philosophy pondered such questions as ‘whether angels have navels?’ or ‘ how many angels can dance on the head of a pin?’ Thomas Aquinas’s position on heresy provided the doctrinal basis for the Inquisition: ‘in God’s tribunal, those who return are always received, because God is a searcher of hearts, and knows those who return in sincerity. But the Church cannot imitate God in this, for she presumes that those who relapse after being once received, are not sincere in their return; hence she does not debar them from the way of salvation, but neither does she protect them from the sentence of death’ (Summa Theologica).

Catholic philosophy did not allow the questioning of doctrine. As Bertrand Russell pointed out, Aquinas ‘does not, like the Platonic Socrates, set out to follow wherever the argument may lead. He is not engaged in an inquiry… before he begins to philosophize, he already knows the truth; it is declared in the Catholic faith. If he can find apparently rational arguments for some parts of the faith, so much the better; if he cannot, he need only fall back on revelation’ (A History of Western Philosophy).

Dostoyevsky in The Grand Inquisitor identified the danger of socialism for religion: ‘humanity will proclaim by the lips of their sages that there is no crime, and therefore no sin; but there are only hungry people. Feed them first, and then demand virtue of them! – that is what they will inscribe on their banner, which they will raise against you, and which will destroy your temple . . . you promised them the bread of Heaven, but, I repeat again, can it compare with earthly bread?’ Dostoyevsky later commented ‘by the stones and the loaves of bread, I meant our present social problems. Present-day socialism in Europe sets Christ aside and is first of all concerned about bread. It appeals to science and maintains that the cause of all human misfortune is poverty, the struggle for existence and the wrong kind of environment’ (Philosophy in Literature).In Heresy, Jesus is arrested by ‘the Cardinal himself, the Grand Inquisitor, an old man of nearly ninety, tall and erect, with a shrivelled face and sunken eyes, from which, though, a light like a fiery spark still gleams’ (Dostoyevsky). Peter Saracen delivers a commanding central performance as the Grand Inquisitor in Tilo Ulbricht’s play.

Ludwig Feuerbach argued in his 1841 work, The Essence of Christianity, that it is important for religion that its object should be radically distinct from humanity; and that it was equally necessary that it come down to Earth if it is to be religiously relevant. For this reason, Christianity teaches the Incarnation where God suffers the indignity of birth, the pain of suffering, and the emptiness of death out of love for humankind. With Incarnation, Feuerbach finds the ultimate expression of human self-love and the surest indication that religion is a human projection: in religion humanity has relation only to its own nature, only to itself, the clearest proof of this is ‘the love of God’, i.e. of projected humanity, for humanity, as before, the basis and central point of religion. With Incarnation, Feuerbach argues humans receive back all that they have surrendered to God. By worshipping God, people unconsciously worship themselves as in Spinoza’s ‘homo homini deus’ (Man is a God to Man).

Marx wrote to Feuerbach that he had intentionally or not ‘given Socialism a philosophical foundation’ (Gesammelte Werke, W. Schuffenhauer, Ed.), by exposing the mystified nature of religion, the alienated subject-object relation can be reversed, God brought down to Earth, and humanity made whole, putting social humanity in its rightful place at the centre of things. In 1870 Feuerbach read Marx’s Capital and joined the German Social Democratic Workers’ Party. Engels concluded that the ‘working class movement is the heir to classical German philosophy’ (Ludwig Feuerbach and the End of Classical German Philosophy).