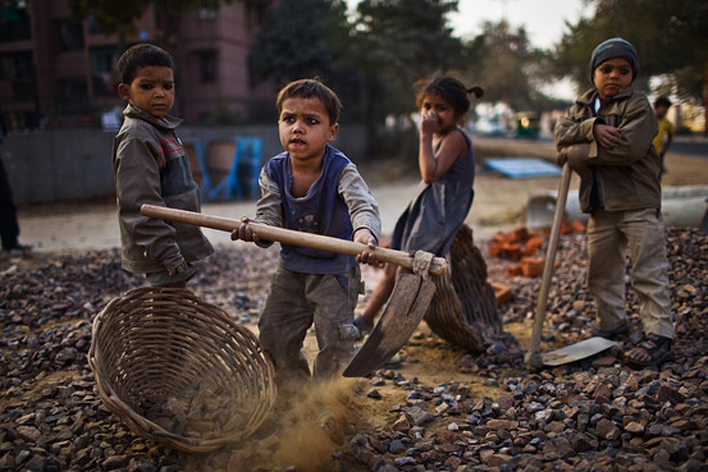 One of the iconic images from the early years of industrial capitalism is that of young children working in mines and cotton mills. Here we examine the history and current situation regarding child labour.

Labour by young children was at the heart of capitalism from the start. Factory production was preceded by domestic industry, whereby small-scale manufacturing took place in workers’ homes; this included the textile industries, where the earliest examples of factories arose. Working in their own homes, handloom weavers could have their children, perhaps as young as four, working alongside them. Down to the 1820s a cotton spinner working in a factory would often have his wife and children working with him, thus preserving the family group. Workers generally saw this last as a positive point, even in the unpleasant conditions of the early factories. Even after families working together in factories declined, children continued to work there. In 1851 there were 600,000 children under fifteen working in England, Wales and Scotland, including 180,000 in textile factories, 130,000 in agriculture and 38,000 in mines. Toiling in such unhealthy environments naturally led to many children suffering health problems, such as curvature of the spine, not to mention the lack of any decent education to speak of and little time or opportunity to play.

As a specific example, from 1813 George Courtauld employed girls, and some boys, aged ten upwards, as apprentices at his silk mill in Braintree. They came from London workhouses, and he paid the workhouse for each child. The children signed a contract that committed them to work at the mill till they were twenty-one. The company went on to become one of the world’s largest producers of artificial fibres.

Child labour was generally seen (by the wealthy, at least) as something entirely natural and unexceptionable, though various objections on moral grounds were made. Others saw it as socially advantageous, since idleness on the part of children was supposedly the road to criminality. There grew up a tension between the desire of some members of the capitalist class for abundant cheap unskilled labour power in factories, which children could provide, and the increasing need for workers with some basic education in terms of literacy and numeracy. Consequently the British Parliament introduced a number of Factory Acts to regulate working hours for children and women, the provision of education and various basic safety measures.

The 1802 Act limited the working hours for apprentices and required them to receive some form of instruction. More significant was the Act of 1833, which prohibited the employment of under-eighteens at night in textile factories. Children (defined as those aged nine to thirteen) could work a maximum of nine hours a day, and young persons (aged thirteen to eighteen) a maximum of twelve. Children could not work in textile mills, except in silk mills (where foreign competition was a problem). Similar regulations were gradually extended to other industries, such as to bleaching and dyeing works in 1860.

The 1870 Elementary Education Act made school attendance compulsory in England and Wales between the ages of five and thirteen, but only in areas where there was a School Board which decided to introduce this. In 1878 the ‘half-time’ system was set up: children under ten could not be employed in factories and those under thirteen were required to split their time between school and employment.

Incidentally, Karl Marx was quite keen on a combination of work and education, mentioning that factory inspectors felt that this made each more congenial to the child than limiting them to just one. And he looked forward to ‘the education of the future, an education that will in the case of every child over a given age, combine productive labour with instruction and gymnastics … the only method of producing fully developed human beings’ (Capital, vol 1, ch 15, sec 9). Much would depend, of course, on the age of the child and the kind of labour involved.

Further restrictions on children working were introduced in the first part of the twentieth century, together with further requirements for education. The 1918 Education Act put an end to the half-time system, though not immediately. In 1935 the Conservative government produced an Education Bill that would raise the school leaving age from fourteen to fifteen; but it allowed children to leave at fourteen if they had ‘beneficial’ employment. Many poorer workers needed the wages of their fourteen-year-old children, while many employers wanted the cheap labour power involved. One MP, the Duchess of Atholl, noted in the parliamentary debate on the bill that some work in textile factories required ‘small fingers’, and that excluding fourteen-year-olds would mean ‘placing a very serious handicap on one of our most important export industries … not one of our great commercial competitors in Europe has raised the school-leaving age to 15’. The Second World War prevented implementation of the Act, and children left school at fourteen until 1947. In the early fifties there were some proposals to put the leaving age back to fourteen again, but nothing came of these. It was eventually raised to sixteen in 1972.

And what of the current situation? It might be thought that children toiling in sweatshops and so on is a thing of the past. After all, even those who want an absolute minimum of government interference in the economy will generally agree that laws prohibiting child labour are acceptable. Surely capitalism in the twenty-first century has no need to employ children? In fact, globally child labour remains widespread.

The minimum age for employment varies across countries, being as low as fourteen in some places, with eighteen as a common minimum for hazardous work. But legal requirements are often ignored in the name of profit. Though the number is declining, 168 million children are reportedly still involved in child labour (this figure is taken from the International Labour Organization (ILO) website, which contains a lot of relevant information: www.ilo.org). In an echo of early capitalism, child workers mostly take part in unpaid work for their family, rather than being in paid employment. In sub-Saharan Africa, roughly one child in four is a child labourer. Furthermore, child labour is in no way confined to the poorest countries; one estimate from 2000 was that 300,000 children were working illegally in the US, and 2.5 million globally in ‘developed countries’, though such figures have to be taken with a large pinch of salt. In addition many child workers in developing countries work in effect for multinational companies, often via subsidiaries much earlier in the supply chain.

Over half of the 168 million are in hazardous work, defined as work which ‘jeopardises the physical, mental or moral well-being of a child, either because of its nature or because of the conditions in which it is carried out’. The very worst forms include trafficking, debt bondage, compulsory recruitment to armies, prostitution, pornography and drug smuggling.

Even mining and quarrying still employ around a million children, working deep underground in tiny tunnels, pounding boulders or using toxic substances such as mercury; this is primarily in informal, small-scale, often family-based operations. An ILO report from 2007 found that girls did not take part in underground extraction work, but could be used to transport rubble and pan for precious stones or gold. In Peru some girls as young as ten could work twelve hours a day in bars that served the mining community, leaving them open to physical and sexual abuse.

The ILO runs an International Programme on the Elimination of Child Labour, which has the goal of ending the worst forms by 2016, but it is accepted that even this limited aim will not be met. The ILO has promulgated various conventions on child labour, and many countries have ratified these, but of course this does not imply that any significant action will be undertaken. In October 2013 the Third Global Conference on Child Labour was held in Brasilia: this produced a Declaration which noted that ‘child labour impairs the realisation of children’s rights and its eradication constitutes an important issue for development and human rights’. It speaks further of encouraging this and promoting that and strengthening something else, but it fails to recognise that child labour and its associated horrors will continue as long as global capitalism enforces widespread poverty, employers benefit from the employment of children, and the poorest workers and peasants have to resort to putting children to work in an attempt to relieve their own poverty.